Are you stumped for an idea for your Halloween costume, but relish the chance to partake in a bit of public spectacle?

Are you stumped for an idea for your Halloween costume, but relish the chance to partake in a bit of public spectacle? Ben Fain’s The Rat City Parade float, at the Annual North Halsted Halloween Parade in Old Town, just might be that moment of stardom you didn’t even know you needed.

The Rat City Parade float is an initiative by artist Ben Fain, a SAIC alum who now teaches in the Sculpture Department at the School. In 2007 he proposed the general theme of “rats” for the 2008 Annual North Halsted Halloween Parade. The theme, which happens to fit neatly with the Chinese zodiac Year of the Rat, was approved by the Triangle Neighbors Association and the North Halsted Area Merchants Association, who have applied the rat theme to the entire parade.

The neighborhood parade, now in its twelfth year, takes place on October 31, and starts at Belmont and North Halsted, heading north to Addison. One of the most popular Halloween parades in Chicago, it attracts over 10,000 spectators, and participation is open to any adult, child or pet, who wishes to dress up and parade through Old Town, provided they register before the event. According to the Triangle Neighbors Association, this year participants are encouraged to consider costumes related to “everything from Ratatouille to The Rat Pack to Rugrats.”

Why rats? “I am in interested in the metaphorical value of the rat, in that they are pestilent, carry disease, live in their own feces, and represent an obvious oral/anal connotation,” said Fain. “Freud argued that we hate the rat because they remind us of ourselves—they are insatiable and highly adaptable.”

Fain is responsible for a specific float in the 2008 parade, The Rat City Parade, which will involve 70 performers dressed in elaborate and frightening rat costumes. The general effect, according to Fain, is intended to be “nightmarish” and “terrifying yet inexplicable.” In addition to a massive, self-propelled float in the form of a moving bedroom scene—Homecoming garlands and all— The Rat City Parade will also feature a large, spinning pizza in the shape of a pyramid, and will include a live performance by Chicago drumming group the Bucket Boys. Fain is working with a choreographer to orchestrate the rat performers in a set of movements and gestures based on observations of rats, insect-swarms and oscillating, wave-like motions of sub-atomic particles.

The Rat City Parade is one of several processional and ritual-style artworks and productions that Fain has produced over the past few years. He commented, “I think parades are one of the last remaining positive rituals we have left.” Fain’s artistic practice is based around finding alternative ways to use public space and involve communal participation, challenging viewers while simultaneously allowing work to be accessible to broader audiences.

When asked about what it takes to be a rat volunteer in The Rat City Parade, Fain said, “It doesn’t take any experience to do it and I would love to get as many people involved as possible…Costumes are limited (to 70) … The performance involves a lot of running, but I think it will be so much fun, and hopefully slightly terrifying.”

Anyone who is interested in participating in Ben Fain’s The Rat City Parade should contact Sarah Febbraro, ratcityparade@gmail.com. The first mandatory meeting will take place on October 5, 5 p.m. at Alogon Gallery, 1049 N. Paulina Street, #3R. Participants must attend at least one of the two rehearsals, on Saturday, October 26, 1 to 4 p.m., and Wednesday, October 29, 6 to 9 p.m. 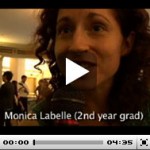 Registering to Vote at SAIC – video