Through the modern miracle that is eBay, I recently acquired a French cicada brooch in a material called galalith. Heavy with both Gallic and Asian symbolic history, the cicada was the genesis of my search, not its plastic substance. But this unusual stuff, of which I’d never before heard, piqued my fashion-curiosity. Of course, as with many eBay purchases, I have no foolproof way of determining beyond a doubt that my little cicada indeed consists of the “French bakelite.” (Which is why I would always recommend the amateur jewelry-collector, like myself, to bid for style and affordability. A piece with personality, cheaply got, is never a bum deal!) However, when I unwrapped the brooch this afternoon, its exquisite composition and searching hand painted eyes set my collector’s nose twitching.

According to a bit of internet research, the word derives from the Greek gala(milk) and lithos(stone). It cannot be molded and is thus shaped by hand. It can, however, be colored, and was often used to impersonate natural materials like tortoiseshell. In an increasingly animal-sensitive age, wearing plastics like galalith is no longer a statement of affordability, but a political one.

Galalith’s relative age and availability have rendered it less visible in modern fashion than its chipper American cousin, bakelite. Bakelite jewelry, made of that charming plastic whose bangles adorn the arms of fashionistas and antique-hunting matrons alike, has only matured in popularity since its mid-century heyday. Galalith and other estate plastics offer a charming testament to the style-historical sensitivity of their wearer.

For more about galalith, see the Ganoskin project , an internet resource for jewelry makers, and eBay’s galalith buying guide. 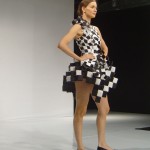 One Response to Pretty in Plastic