Miranda July understands me and you and everyone we know

I dub Miranda July’s new film, Me and You and Everyone We Know, “the loneliest little movie on the planet.”

I dub Miranda July’s new film, Me and You and Everyone We Know, “the loneliest little movie on the planet.”

A story of both alienation and unlikely intimate connections, Miranda July manages to pick at that undercurrent of sadness that dogs the edges of our everyday existence. In a previous interview for F Newsmagazine with Rovert Becraft featured with F News Online here, Miss July discusses this theme in her work:

“There is this wonderfulness about living that is the main thing that I feel, but it definitely has drawn currents of sadness or bleakness within that. I don’t think that’s not wonderful, I think they’re just like different pitches of the same note. Sometimes, expressing the bleak feeling of it is more important in making people feel not so alone and desolate.”

Performance artist, former indie rocker, and now filmmaker, July is brilliant at staging her characters’ struggle with meaning in their communication with each other. Every piece of dialogue in the film is crucial and loaded. Early on in the film, you start to notice that no one is filling in the awkward silences of these characters’ conversations; their reactions to one another seem a bit askew, their emotions spare, but raw. This is a big part of the film’s power: it is painful because you empathize so completely with them.

July also explores how modern technology and human interaction both need and repel each other. Several characters find themselves in emotionally intimate situations where some form of technology is the gateway. The main character (which Miranda July plays herself) epitomizes this push and pull. She video-records Polaroids of unknown people with their backs to the camera, overlooking various scenic spots up close, then dubs an intimate conversation over it with her doing both voices. At other times she writes “Me” on one of her shoes, and “You” on the other, and videotapes them moving toward and away from one another. Her life revolves around her very emotionally charged and personal art, but she never performs it live; she only performs for the camcorder. The gallery owner receives a tender touch she so desperately needs from a 6-year-old boy she meets in a chat room over a conversation about poop. A teenage neighbor connects with the (much younger) girl next door while they lie on her bedroom floor, and she tells him about the new blender and towel sets she bought for her hope chest in anticipation of someday getting married and having a kitchen of her own. 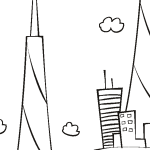