One day, I was on the 12th floor of the Michigan building. I was sitting at a table by myself during break time. I could see some other Korean students chatting at one of the tables. One of the elevator doors opened, and a group of Korean students walked toward the Plum Café. I wondered how many more Korean students are there now at SAIC than when I came in the Fall of 2003. 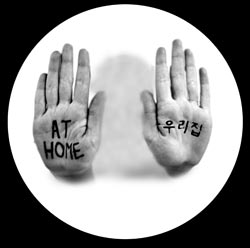 One day, I was on the 12th floor of the Michigan building. I was sitting at a table by myself during break time. I could see some other Korean students chatting at one of the tables. One of the elevator doors opened, and a group of Korean students walked toward the Plum CafŽ. I wondered how many more Korean students are there now at SAIC than when I came in the Fall of 2003. Everytime I go somewhere around the school these days, it’s not hard to find Korean students. The inquiry into the apparent increase in the number of Korean students has been a chatting matter with my friends. Some of them complained about the growing number of Korean students, while some said that this trend is good because it means that SAIC is becoming more famous in Korea.

I looked back on when I had to choose a school to attend, I looked on the Internet and SAIC was ranked first or second, depending on the department. I asked my professor at Sang Myung University in Seoul about SAIC. She said that SAIC has been the best school for art since she was a college student. She advised me that if I was to go back to Korea someday, it would be a great idea to go to a school that had a good reputation in Korea. That is why I came here.

I decided to do a survey of Korean students. I wanted to know why Korean students came to SAIC. I wondered if, as I did, they came here because of the school’s reputation. I surveyed 31 students.
About two-thirds of the students said they wanted to study here because of SAIC’s reputation and its connection to the Art Institute museum. When I studied fashion design in Korea, I always looked at the old style of fashion to create garments. It helped a lot. So, when I came here, I thought I would go to the museum many times.

I was surprised that I could take courses in more than one department at SAIC after I came. As an undergraduate, I could take classes with graduate students. The registration system at SAIC is different from that in Korean universities. In Korea, for example, if I enrolled in a fashion design department, I could not take any of the graphic design classes because of the limited computer resources. There were set requirements that each student had to fulfill for graduation in each department. I think the ability to take classes in different departments helps students to get creative ideas. Most of the students I surveyed said that they liked this system. One VisCom student, SoYoun Kim, a transfer student in the Fall of 2003, was taking a Shoe Design class in the Fashion Department. She said that the class was more fun than any of the VisCom classes she took, and she really wanted to change her major.

Many Korean students came to SAIC because of its reputation and its close ties to the museum. But did they change their minds about the school later? Not many students said that they were satisfied with the school one or two years after they came. The majority said they felt neutral about the topic, and some said they were still happy with the school.

To me, one of the unique things about SAIC is the grading system. Here, the instructors only give grades of Credit’ or No Credit. In Korea, there is competition between classmates for good grades, because only a certain number of students are allowed to get a particular grade. The results of the survey suggest mixed feelings on this topic. While 12 students liked the grading system, 13 students didn’t.

More than half of the student surveyed said that they want to stay in the US after graduation. One of the Korean students who transferred from the university in Korea, Se-Na Hwang, wants to have some job experience here before she goes back to Korea. The more experience she gets here, the easier it will be to get a good job in Korea.

One of my classes, Intermediate Graphic Design, had 14 students, and among them there were 11 Korean students. Whenever I went to class, I felt like I was studying at school in Korea. My Korean friend, Yoon-Jung Jang, said the same thing about her Interior Architecture classes. In the survey, 23 students out of how 31 said that they felt there are too many Korean students in their departments. I asked them if they thought the increase in the number of Korean students was a positive change. Many students said that it wasn’t.

My Intermediate Graphic Design class had many critiques, and few Korean students offered their opinions about other students’ work. I also have a hard time talking in class; it is hard for me to speak English and I’m not used to the SAIC system. In Korea, I made many presentations, but most of the time only the instructors made comments about my work. Here, it is very important to get some ideas from my classmates during the class critiques. But if there are too many Korean students in the class, it’s harder to get good comments from the classmates.

I have a good opportunity to make American or international friends while I am studying in the US. But somehow it is hard to make American friends. One of the graduate students in Interior Architecture, Insun Jo, said she wanted to make American friends when she came to study here, but it was not easy. She said that getting along with Koreans is much more comfortable than with Americans because of different languages and environments. Most of the Korean students I surveyed said that more than half of their friends at SAIC were Koreans.

From my experiences, I feel that American students are patient with my awkward and slow English and try to understand it. But I always wonder if they understand exactly what I mean. Sometimes, I make sure other classmates understand what I say, but not every time.

During my three semesters here, I have met many teachers. Some of them were patient with my English; some were not were not. I took a Screen Printing class during my second semester. There was one other Korean student in the class. The instructor always told me that if I had a problem understanding, I could ask her to clarify. When I tried to talk to her, she would carefully listen.

In another class I took, there were no Korean students. The teacher was very concerned with me understanding what she said. At the beginning of the semester she asked me many times in front of other classmates during the critique: Do you understand what I said, Min? I knew she cared about me. But in front of my classmates, I was uncomfortable answering her, even though a lot of the time I was not quite sure what she meant. After a while, she stopped asking me if I understood, and I felt more comfortable approaching her and asking about what I could not understand. I was so embarrassed that I said, I don’t understand in front of all my classmates at the beginning of the semester. In the past, I sometimes said, I do, even even though I did not. I often asked one of my classmates, who is one of my best friends: What’s going on?

Many Korean students came here because of SAIC’s reputation in Korea. They like the school’s system of encouraging interdisciplinary study to learn what the other arts are like and to learn where they want to be in the future. Having a job in a different country is also a good experience for the students. Even though many Korean students have only Korean friends, they don’t like having only Korean friends in school, because they want to learn more from other students. If there are only Koreans in the class, I think that studying in Korea and the US is the same. A majority of Korean students said that they have a hard time understudying the assignment, but during the critiques, the instructors and American classmates are carefully listening and trying to understand them.

You Say You Wanna Be An ARTSTAR