The greatest problem that Western museums face is that they are, as one of my SAIC professors described, a guilty pleasure. Re-opening this fall is the de Young Museum’s snazzy new Swiss-designed building in San Francisco’s Golden Gate Park.

The greatest problem that Western museums face is that they are, as one of my SAIC professors described, a guilty pleasure. Re-opening this fall is the de Young Museum’s snazzy new Swiss-designed building in San Francisco’s Golden Gate Park. The de Young is particularly renowned for its collections of historic and contemporary American art, ancient Mesoamerican art, the arts of the indigenous peoples of the American continents, Oceania and Africa, and textiles from around the world. The museum recently announced an enormous gift, worth over $100 million, of Oceanic Art, donated by New York entrepreneurs Marcia and John Friede. On one hand, this grand re-opening and even grander gift should be celebrated, and on the other hand the low road that cultural institutions take to achieve this grandiosity should not be overlooked.

The entire Friede collection includes 3,000 objects from the South Pacific island of New Guinea. The New York Times described the 350 pieces from the collection that will be on display when the museum reopens as many [objects] of exceptional beauty and rarity and some of unsuspected antiquity.

Something tells me that we should be suspicious, though maybe not of the antiquity of this collection of masks, shields, musical instruments I am sure they are properly antiquated. In fact, for years and years artists and art collectors have sufficiently embraced the South Pacific. For a little art historical reference: Paul Gauguin made his mark on the South Pacific island of Tahiti, Matisse also liked to draw inspiration from the South Pacific and French Surrealist writer André Breton collected the stuff too.

What we should be suspect of is the $100 million price tag dangling from these cultural artifacts. It is not surprising to find that although New Guinea is rich with natural resources, the country suffers from environmental exploitation. (Westerners not only collect the island’s art but also its coffee beans.) In New Guinea, 37 percent of the population lives below the poverty line.

The de Young collection of Oceanic Art, although a generous gift, exemplifies various art problems and controversies. For starters, the term Oceanic Art clumps so many countries together, and the word primitive is still used to describe the art. Furthermore, museums were built upon the collecting, which arguably means taking, of cultural artifacts from other lands, making museums a guilty pleasure. The Field Museum in Chicago actually has one of the most stunning collections of Oceanic Art, truly a collection that began with the ethnographic amassing of objects for 1893 World’s Columbian Exposition.

Restitution is considered a tricky problem, only because those in charge of western art and culture are not truly willing to offer reparations to places like New Guinea. Consider this: $100 million would go pretty far in New Guinea. 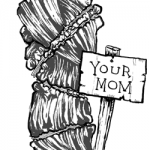 If The Powers Of Christo Compelled Me 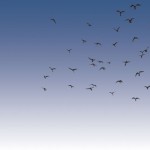 A Billion A Year: Birds, Buildings, and Chicago