A Billion A Year: Birds, Buildings, and Chicago

During the months of February, March, April (even as you read this), May, September, October and November, many of the songbirds of North America stop in Chicago on their way to and from their summer homes. Upon arriving on the shores of Lake Michigan, birds with names like Ovenbird and Brown Creeper are greeted by the reflection of a brilliant sun, trees and sky in the splendid glass-and-steel towers of Mies van der Rohe, Helmut Jahn and Philip Johnson. 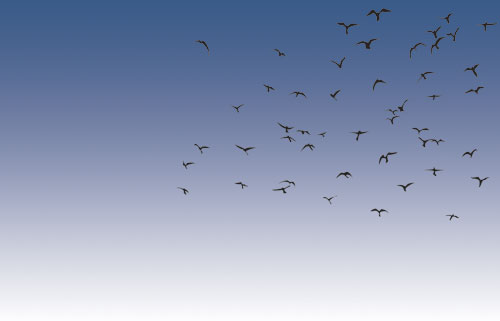 During the months of February, March, April (even as you read this), May, September, October and November, many of the songbirds of North America stop in Chicago on their way to and from their summer homes. Upon arriving on the shores of Lake Michigan, birds with names like Ovenbird and Brown Creeper are greeted by the reflection of a brilliant sun, trees and sky in the splendid glass-and-steel towers of Mies van der Rohe, Helmut Jahn and Philip Johnson.

Whereupon the birds crash into the glass and fall to their deaths. Field Museum ornithologist Douglas Stotz says that even though it’s hard to prove that these collisions impact bird population levels, the deaths still need to be taken seriously. Conservative scientific estimates now put the total number of birds killed by such collisions per year in North America at one billion.

Even if you think, somehow, that humans have the right to take over the planet, which we certainly act like we do, Stotz says, these are unnecessary deaths that are occurring … It’s just like highway deaths. Those don’t affect human populations, but that doesn’t mean you want to let them happen.

Randi Doeker, president of the Chicago Ornithological Society, and a self-described birder and bird conservationist. To the best of my knowledge, 100 percent of building owners, landowners and responsible parties in the Loop are ignorant of the problem. What I … do is educate the architectural and design community so they can design fixes … so that when the building owner turns to them, there is an educated design community. That said, there are horrible places we are working with directly.

One horrible place which kills birds is the east-facing reflective window on Columbus Drive which connects the School of the Art Institute with the museum building.

This is a site that has long been a problem for birdsthey slam into the two-story glass along the length of the building, and birds that aren’t killed outright will lay, stunned, in the moat-like fountain designed by Osamu Noguchi, until they are either able to fly away or, more often, are killed by a lurking predator like a raccoon or a hawk.

Another design school with a bird-collision problem is IIT. According to student observers there, the new State Street Village dormitories, designed by Helmut Jahn, are killing hundreds of birds. And this is not the only high-collision-rate building on IIT’s campus.

One of the things we know is that 70 percent of dead or stunned birds get picked up by scavengers, says Doeker. So on a college campus like IIT, people are only seeing a small number [of dead birds], and are not aware that there’s a much larger number getting picked up by scavengers. Then when you put up a new building, the scavengers haven’t found it yet. And you begin to see the real magnitude. You’re seeing 100 percent of the dead or stunned birds.

Doeker says that when the school saw how many birds were crashing into the Helmut Jahn dorms, teams of engineering and design students formed to try to address the problem. It’s a challenging building, says Doeker. There are 500 solutions, but it’s a challenge to find one that the architects will approve of, that the window manufacturers won’t say that it voids their warranty … there are all of these [groups to consider].

The city of Chicago, in concert with IIT and the Chicago Ornithological Society, sponsored the March 11 Birds and Buildings conference, intended to educate architects and designers about the many potential design solutions to this problem. The conference was held at IIT and featured talks by scientists and officials who have tested a variety of solutions to this problem, both in the initial design of a structure and retroactively, to fix areas that are known bird-killers.

An easy solution is simply to make that window a piece of artwork, Doeker suggests. If you look at a comparable window at the Museum of Contemporary Art, the east window, artists have used that window. [The MCA said] there are hundreds of solutions, but it’s an art museum! Let’s use it as a marketing tool.

Small steps have already been taken to try to reduce the number of bird deaths at the Columbus Drive window. It’s the reason there is no water in the well of the Noguchi Fountain. There used to be, but Doeker said that people began calling the Chicago Ornitholo-gical Society to complain that birds were hitting the glass and then drowning in the fountain. So the school drained it, a move which birders agree has somewhat helped the situation.

Less effective are a few scattered decals of raptor birds which are stuck to the glass on the two-story window that connects the School building to the main Art Institute building. Doeker says that more is needed to reduce bird deaths there. Songbirds will attempt to fly through any [transparent or reflective glass surface] larger than a handprint, she notes, adding that we at SAIC may not be seeing the extent of the problem because that would be a place that is well known to scavengers.

Meredith Mack is the Art Institute’s Vice President for Finance and Operations. She acknowledges the building has a bird collision problem and says the museum has talked about a couple of options for addressing it. However, she adds, we are about to mobilize for construction on the new wing, referring to a new wing of the Art Institute designed by Renzo Piano, on which construction is set to begin this summer. And since the trailers for the construction project which are set to arrive in June, according to Mack will sit in front of that window, she hopes that they will steer the birds away. As for this season’s heavy migration period, the months of April and May, Mack admits that nothing is planned to make the window less dangerous for the migrants.

Mack says that options for that window include possibly adding curtains to the interior of the tall reflective glass window, or some kind of applied graphic on the window itself which would mute the reflectivity of that surface. It is something we’ll want to be working on, she says. It’s just the timing for this year is not logical.

There are even bigger killers in the Loop. At a building complex called Michigan Plaza, including 225 N. Michigan Avenue, Doeker says that the east side is a nightmarish scene of death during the migration seasons. You can watch birds bounce off the side of those buildings, she says. And although the Lights Out program (in which high-rise office buildings reduce migrating bird collisions by turning out lights at night) is helping, she adds that in many buildings it is not institutionalized yet, meaning that when the person in charge goes on vacation, [turning the lights out] gets forgotten.

I do believe a change needs to happen, says Stotz. We’re doing a lot of things to birds’ habitats that we shouldn’t be doing. And we ought to be thinking of that before we do additional development … It’s something that I think there’s really no excuse to be doing because Donald Trump wants the tallest building in the world, or whatever … The big issue is how much glass gets used, and the fact that it makes buildings killers.

It’s all about trying to change what happens in the future, Stotz adds, … and if you have to build a big building, you can make it less dangerous just by reducing the amount of glass.

The list of such solutions is long and growing longer. They include replacing regular glass with fritted glass, or glass that is etched with a pattern of some kind which covers enough surface to prevent bird collisions. Fritted glass is attractive and still lets in light, without reflecting. Another solution is designing large windows that are angled downward, so that they reflect not sky and trees but the ground, making them unattractive to flying birds. A great example of such an angled window is at the Adler Planetarium in Chicago, or at Calatrava’s Milwaukee Art Museum.

The City of Chicago helped to organize the Birds and Buildings conference. We encourage building owners and architects to consider these solutions for their buildings, says Joyce Coffee, Program Director for Natural Resources and Water Quality at the city’s Department of the Environment. Coffee’s beat at the DOE includes working on the Lights Out program and the Birds and Buildings conference. The city is leading by example, and then it hopes to see individuals taking action [to conserve natural resources].

We need some architects on our side to help, says Stotz. … I’m sure there are architects out there who are birdwatchers … That would be the obvious person to start thinking about, how can we put bird safety in with these other things that we want our buildings to do?

At least one SAIC design student takes this issue seriously enough to incorporate it into a project. Kimberly Viviano, an MFA student in the Visual Communications Department, has begun working on a design plan for the glass-enclosed bike station at Millenium Park which would address the fact that it is dangerous for birds. She is looking at various design strategies which would break up the transparency of the glass, such as adding miniature solar panels or a non-reflective film.

Why should the city of Chicago care that its glittering, glass-fronted towers are killing birds?
They should care, says Doeker, because the population numbers of birds are declining dramatically. Birds play a vital role in the ecology of the planet, and we won’t like it when they’re gone.

Doeker cites a dark lesson from the history of human intervention in bird populations: in 1958, Mao Tse-Tung decided that sparrows were a pollutant, an enemy of the state. He initiated a bounty-hunting campaign against them that wiped out most of these birds in China. The following year, China experienced a terrible plague of insects, bugs which normally would have been eaten by sparrows. Only now, there were no sparrows. Mao was forced to rip out plants and trees where the insects nested, a move which created dust bowl conditions in the area around China’s capital for years.

Chicago’s mayor Richard M. Daley clearly wishes to be remembered as a more nature-friendly politician. In 2000, he and the Fish and Wildlife Service co-signed the International Migratory Bird Treaty, making Chicago the second US city to sign, according to Coffee.
Chicago happens to be on an international flyway, says Coffee. The city of Chicago is very keen on being a green city which conserves and protects resources … so birds can have a nice visiting experience here. We also must balance that with the needs of residents.
This [effort to reduce bird collisions] is part of making Chicago a livable place, says Stotz, making it a place where wildlife can live in harmony with the people.