James Gray’s latest film ponders his own childhood and the end of the world. 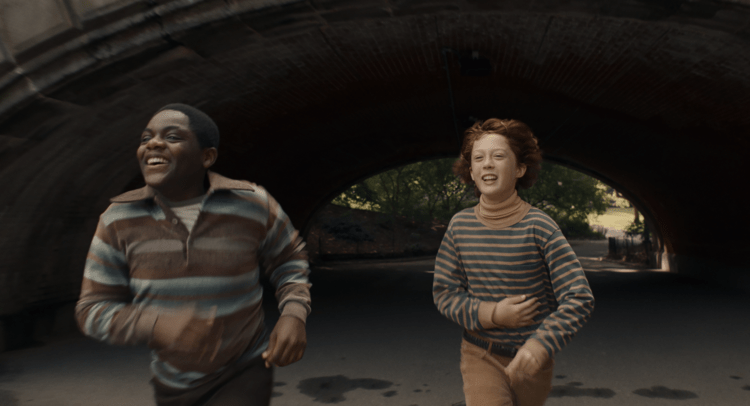 Writer-director James Gray’s latest film, “Armageddon Time” is named after the Willi Williams 1977 reggae hit, “Armagideon Time.” It’s a surprisingly dramatic name that conjures up images of apocalypse and destruction more than it does the erstwhile friendship of two young twelve-year-old  boys in 1980 New York City. When I heard the name, I expected something slightly more cosmic, more akin to Gray’s prior work in 2019’s “Ad Astra,” which sent Brad Pitt into space, chasing his missing father. “Ad Astra,” or “Star Dad” as I call it, was one of my surprise favorites that year, a thoughtful, meditative exploration of familial ties and masculine emotional repression, stealthily packaged with some interstellar box office sheen. But in “Armageddon Time,” Gray stays close to Earth, specifically, Queens, in part fleeing the technical requirements of high-concept films, but largely because the film is inspired by Gray’s own childhood. This is Gray’s adolescence, warts and all.

Still, the question remains: What is the armageddon? What is the impending doom? What do the films’ characters fear? As it turns out, they don’t fear so much the end of the world, so much as they fear the future.

There’s the national future, the crisis of the American Dream coming to a head, as the USA is about to elect Ronald Reagan into power. Is nuclear war on the horizon? Will American race relations regress? The eternal dinner table question: what is this country coming to? Then, there’s the familial future. What will come of the next generation? Will they rise to the challenge, will they surpass their predecessors? Importantly for the Graffs, a Jewish family in Queens, will they remember where they came from? What they have fled? And then there’s the child’s future. The twelve-year-old Paul Graff, played by Banks Repeta, who feels the expectations of his family, of his nation, still having no idea who he is, but seeing who everyone wants him to be. And there’s his best friend, Johnny Davis, played by Jaylin Webb, a young black boy who is ignored by his nation, who has nobody in his corner, and who nobody wants to succeed.

And like many twelve-year-olds under extreme pressure, Paul and Johnny rebel.

There’s a temptation with autobiography to either criticize the younger self too harshly or give them too much leeway. Gray doesn’t do that. Gray understands that if we focus close enough on a person, we can see who they are, their flaws, their messiness, without neglecting the system that exists beside them, behind them, and in the periphery. “Armageddon Time” acknowledges the systemic privileges he was accorded and his complete inability to fight back. The film doesn’t make excuses for Paul. It doesn’t try to forgive, nor absolve. It just shows us things as they were.

The politics of “Armageddon Time” are harder to parse because it isn’t a neat coming-of-age story, where Paul learns the follies of his ways and comes into his own. Nor is it a film that seeks to condemn young Paul for his cowardice and blindness. I don’t doubt that some viewers will look for that moral, and accuse the movie of making Johnny a stepping stone for Paul’s growth. But Paul doesn’t even really grow, despite the attempts of his parents.

Playing those tired, weary, and well-meaning parents are two titans of acting, Anne Hathaway and Jeremy Strong. Gray doesn’t want us to look at these fictionalized versions of his parents and judge them. Instead, we see them as he sees them now: as people who were simply trying to do their best when they had no idea what that could be. Hathaway and Strong both load their performances with that complexity; they are trying with Paul, but they have their limits. They want to be better, they want Paul to be better, but no one really knows what better means.

Sometimes in acting, actors choose to Act with a capital A. Ego drives their choices more than the character, and we lose ourselves in the image of the actor performing, instead of the character they are inhabiting. It becomes about showing us what they can do rather than what the character deserves. Anthony Hopkins steers clear of any such notions, playing Paul’s grandfather as completely and utterly human. There isn’t that melodramatic spark, that theatrical lean that we all know Hopkins is adept at. Instead, he plays Paul’s grandfather as a full human, contradictions and all. Whenever he tells Paul a story, he is telling Paul the story. The audience is a bystander. We are observers witnessing, not Anthony Hopkins perform, but Aaron Rabinowitz imparting a lesson on his young grandson. He’s sometimes sage, sometimes goofy. He is a man who has seen the world shift by him, a world he will leave to his children and grandchildren. Hopkins practically disappears underneath Aaron Rabinowitz.

Paul’s grandfather is described as “the heart of the family,” the one who keeps everything together. This is true of the film: Hopkins is the emotional core of the film that everyone else revolves around. For that same reason, when his character’s presence is less felt, especially in the later parts of the film, the narrative becomes a little listless. Perhaps this is intentional, because now like Paul, we are without our anchor. It’s successful in that, but the byproduct is that we start wondering where this film is going, if it’s going to take us anywhere.

Like with “Ad Astra,” Gray isn’t interested in the endpoint. It’s about the changes or realizations along the way. And we realize “Armageddon Time” is about privilege, not just what it affords us but what it obscures. Paul’s Jewish heritage makes his family the subject of discrimination. But it also blinds them to the oppression of others and can even enable their prejudices. That siege mentality makes them defensive, eager to claim what they’ve earned. And again, Gray doesn’t show us this to condemn them. We understand where their blindness stems from, and we see the damage it does. We can make our own assessments of them. But Gray won’t.

That even-handedness may frustrate some viewers who want more moralizing in this autobiography. But actually, even-handedness isn’t quite the right term. That suggests centrism, that the film is equivocating between racism and non-racism. It doesn’t do that. The appearance of Fred Trump (John Diehl) and Maryanne Trump (Jessica Chastain), benefactors of Paul’s elite private school makes it clear where Gray sits. He makes no qualms about the Trumps who both claim they fought for their spot even though their “struggle” is miles apart from Johnny’s struggle to stay housed or the violence Paul’s forebearers ran from.

“A lot of people won’t get no justice tonight

Remember to kick it over

No one will guide you

6 Podcasts in 6 Unique Genres You Need to...