Maybe in old methods there’s some new methods to stopping a culture war. 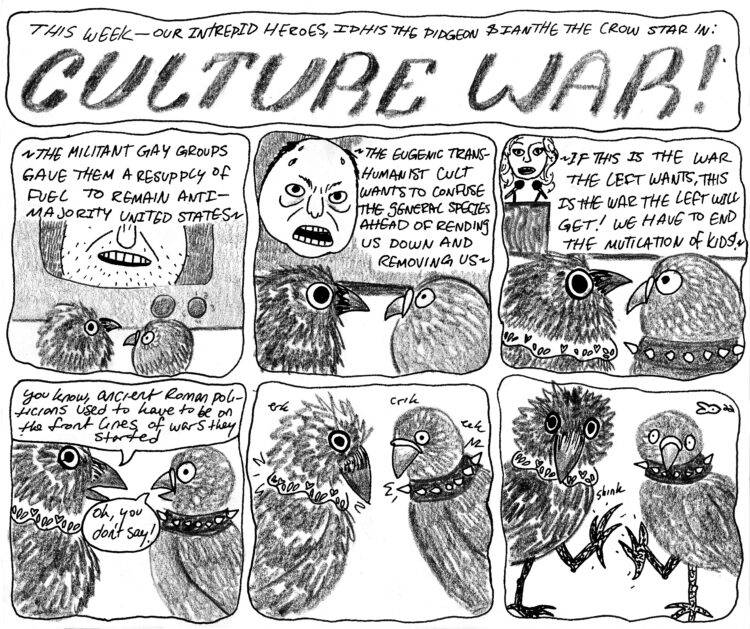 The header reads “This week – our intrepid heroes, iphis the pidgeon & ianthe the crow star in:” with “CULTURE WAR!” below it in large pencil lettering.

Panel 1: a baby crow, Ianthe, and a baby pigeon, Iphis, are watching an old fashioned TV which takes up most of the frame. On the TV is Rush Limbaugh, whose face is obscured by the words “the militant gay political groups gave them a resupply of fuel to remain anti-majority United States.”  https://www.glaad.org/gap/rush-limbaugh?response_type=embed

Panel 2: A teenage Iphis and Ianthe are watching a slightly newer TV that takes up a large part of the frame. On the TV is Alex Jones, who is sweating and saying “The eugenics, trans-humanist cult wants to confuse the general species ahead of rendering us down and removing us.” https://www.glaad.org/gap/alex-jones

Panel 3: An adult Iphis and Ianthe are watching an even newer TV. The birds’ heads take up most of the frame. The Ianthe is wearing a lacy ruff around her neck, and Iphis is wearing a black collar with spikes. On the TV is Marjorie Taylor-Green standing at a podium, saying “If this is the war the left wants, this is the war the left will get…We have to…end the mutilation of kids.” https://twitter.com/RepMTG/status/1562475875156627456?s=20&t=PcDkG0XTtK-3YzBNaUWI4A

Panel 4: Iphis and Ianthe are standing in profile and talking, and their bodies are in frame. Ianthe says “You know, ancient Roman politicians used to have to be on the front lines of wars they started.” Iphis responds “Oh, you don’t say!”

Panel 5: Iphis and Ianthe start turning their heads to face the viewer, and around them are the sound effects “erk” “crik” “eek.” More of their bodies are visible.

Panel 6: Iphis and Ianthe’s legs are visible and they both hold one foot up. They both have sharp claws with lines showing that they are shiny, and the sound effect “shink.” They both look straight at the viewer in a menacing way.