“The Woman King” grapples with history without sacrificing thrills or style. 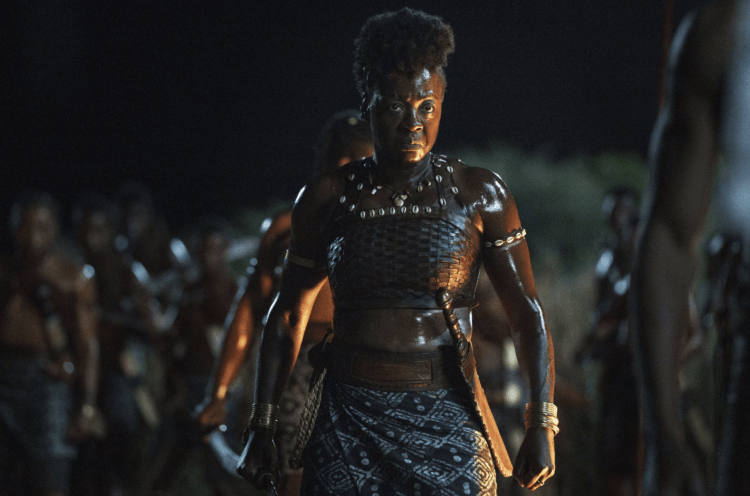 For those of you not perennially online, there is currently an argument that the new action movie starring Viola Davis, “The Woman King,” should be boycotted as it valorizes the Dahomey Kingdom. The argument for the boycott is that in the 19th century, the Dahomey people of what is now present-day Benin actively collaborated with European slavers, selling the bodies of other African people to accumulate wealth. The titular Woman King is the female counterpart of the male regent of the Dahomey Kingdom, into whose pocket all the riches of slavery fell into. The people driving the boycott believe this film upsets historical truths by making heroes of the Dahomey’s women-warriors, erasing the Dahomey Kingdom’s generations of oppression.

Like many online arguments about movies, this debate could easily be resolved if everyone watched the movie.

“The Woman King” tells the story of the Agojie warriors, the all-female arm of the Dahomey’s military forces and their leader, General Nanisca, played by Viola Davis. It’s about their war with the much larger Oyo Empire, which demanded a tithe of slaves and goods from the Dahomey. It’s about Nanisca maintaining her ironclad demeanor while grappling with her past trauma. It’s about Nawi, a new Agojie recruit played by Thuso Mbedu, abandoned by her family for her stubbornness as she tries to assert herself as an Agojie warrior. And, most relevantly, it’s about the Dahomey Kingdom trying to decide whether it wants its legacy to be one of oppression and enslavement, or of resistance and liberation. The movie literally starts with an opening crawl, letting us know that this kingdom “is at a crossroads.” The film does not try to obscure its subject’s complicity with the horrors of slavery. The Dahomey Kingdom’s role as slavers is not in the film’s subtext; it’s in the film’s text.

And for what it’s worth, that text is exciting, with thrilling set pieces and grand conflicts. There are the military stratagems for the Dahomey David to topple the Oyo Goliath; the machinations in the Dahomey royal court as the king’s wives vie for power; the insider-outsider dynamics of the Agojie soldiers who take in women of any tribe willing to join their force; and the aforementioned moral tension between prosperity and collusion. These themes are grounded in the film’s ensemble because though the film may be marketed as a Viola Davis feature, she is only one part of the film’s expansive and talented cast.

Much of the film’s ensemble consists of fairly new faces in the film industry, this being their first major roles outside of television or theater. Thuso Mbedu, from Amazon’s “The Underground Railroad,” is a revelation in her silver screen debut as Nawi, the arrogant teenager trying to stake her claim as a formidable soldier. Sheila Atim plays the Agojie’s second-in-charge, and Naniswe’s acting conscience and spiritual guide. Jimmy Odukoya is the cruel, vindictive general of the Oyo Empire, grinning at every spurt of blood. These are only some of the many fresh faces in the film’s ensemble, all of whom are given time to shine and develop both on and off the battlefield.

Of the film’s more known cast, Lashana Lynch stands out as the Agojie’s training officer, Izogie, imbued with an infectious sense of humor, incredibly expressive eyebrows, and a killer instinct. And of course, Viola Davis is a force of nature. But in this film, Davis proves that she is just as much of a force physically as she is emotionally, mastering many of the film’s complex action choreography sequences.

There are plenty of vivid and dynamic fight scenes in this movie, varying between midnight ambushes, small-scale skirmishes, and all-out warfare. Director Gina Prince-Bythewood and her fight team brings these battles to life with clarity and excitement. There is a consistent sense of awe during these fights, watching the Agojie slash, stab, and work together while fending off both Oyo and colonial soldiers. Each warrior of the Agojie has their own fighting style, too: Izogie gets up close and personal, Amenza’s staff keeps her opponents at bay, and Nawi wields a sword attached to a rope that spins and strikes at deadly speeds. Their personalities blend into their combat styles, making them more than just faceless soldiers on a battlefield or one of many members of a large ensemble.

But when the film drifts away from the daily militaristic life of the Agojie, it sags. In particular, Nawi’s romance with Malik, a Portuguese man of mixed descent, isn’t as gripping as the rest of the film. It doesn’t quite bore but it feels shallow compared to the depth of the rest of the film’s world. It isn’t that the movie’s only good feature is its action: the camaraderie between the three new Agojie recruits is delightfully refreshing, free of the boorish tropes of rivalries-turned-friendships. Any sequence with the Agojie dancing or chanting is sonically and visually beautiful, and every costume is a sight to behold. It’s more that General Nanisca’s warnings of straying from the tenets of the Agojie apply just as easily to the film’s plot.

Terence Blanchard deserves recognition as the film’s composer, crafting musical backdrops as evocative as the Agojie’s fights. A soundtrack should lift the film’s themes, amplify tension, set the mood, and be memorable. Many action movies in recent memory struggle to achieve this; they’re either relying on what’s fashionable like the nostalgic synths of “Stranger Things,” are forgettable like the orchestral themes of the Marvel Cinematic Universe, or if they are bold and new, overpower the film’s action like Ludwig Göransson’s score on “Tenet.” Blanchard’s sonic vision of 19th century Africa manages to walk this line carefully, though with some slip-ups. Its pounding drums and the ethereal, lyric-less chants of the Vox Noire ensemble and jazz singer Diana Reeves are perfect for the film’s many fight scenes and rousing montages. But occasionally, the soundtrack’s strings are a tad too overbearing during the film’s more emotional beats, taking away from the actors’ performances. These are also more pronounced during Malik and Nawi’s romantic scenes, which are already among the film’s weaker sections.

As a non-historian, I can’t comment on the film’s historical accuracy. What I can say, as a regular movie-goer, is that I’m rarely going to the movies for facts. And I’m especially not going to an action movie for factual accuracy, whether it is based on historical events or not. Is “300” accurate? Is “Gladiator?” Is “Braveheart?” Is “Pearl Harbor?” We didn’t ask for accuracy from these arguably worse movies. And none of those movies were as financially risky as “The Woman King,” which features Black women, a historically maligned group of Hollywood, as its main cast. Nor are those movies as thematically complex, examining and addressing the complicity of its heroes in one of history’s greatest crimes. To be clear, I’m not saying you should watch “The Woman King” to make up for the sins of Hollywood past. Instead, you should watch it because it grapples with a complex history without compromising on fluid, colorful, and deadly action.

Investigating Chicago’s Tornado Siren — “That is what an...

Virgil Abloh Through the Eyes of His Colleagues: “He...