A deep-dive on the Windy City’s infamous tornado siren. 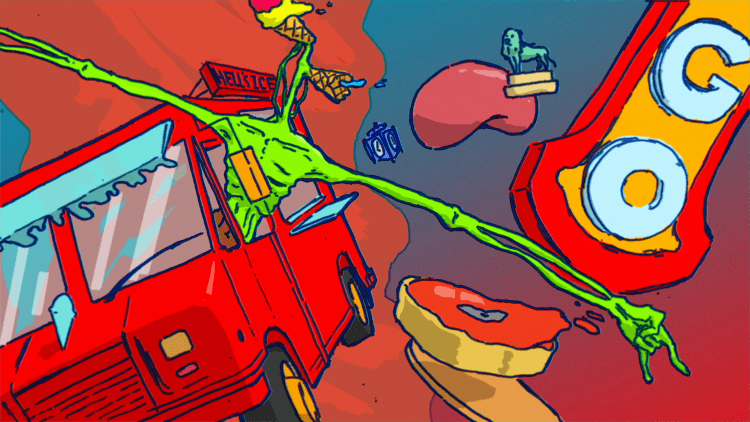 As a newcomer to SAIC, my touring trip to Chicago concluded with a twist, of twister, on May 25, 2022. Right before the plane took off, the phones on board symphonized the emergency alert tone, as a tornado formed around Des Plaines, Illinois, a town 20 miles northwest of downtown Chicago. A few weeks later, on June 13, a tornado visited the “Windy City,” setting off the sirens in town. Tornado is no stranger to local Chicagoans, as residents of “Tornado Alley.” To newcomers, the encounter of such a disaster is little-known, and proper preparedness is deemed necessary.

My curiosity led me to research more on tornadoes and the alert system in Chicago. What caught my immediate attention was a 2010 Youtube upload titled “Tornado Sirens in Downtown Chicago! (Original Video Recording).” The clip shows an ominous and rainy sky shot in the South Loop. Lightening intermittently lights up the blurred sky. Penetrating the background thunder sound is an eerie siren that leaves this first-time listener puzzled. Unlike a common siren tone that barely runs up and down, the Chicago tornado siren has an outlandish wailing tone. On top of rising and falling tones, it also features a minor third drop throughout. The alternation itself is not unlike a malfunctioning ambulance siren.

The “Windy City” won a place on News Center Maine under the joking headline: “Chicago’s Tornado Sirens Will Haunt Your Dreams.” As the host said, “If there is anything creepier than a tornado it’s this.” The seemingly “cracked” siren does indeed crack many internet users up. The unsettling, yet unavoidably amusing, sound attracted humorous responses to the clip, like user JC Pennys, who commented: “That is what an ice cream truck from hell sounds like.”

This tone that elicits such mixed feelings is credited to the Federal Signal Modulator. The Modulators are capable of producing seven different warning tones and Chicago is infamous for playing the “alternate wail.” Despite the amusing facade, the siren does draw attention well and alert residents of the approaching disaster. Unlike an ordinary siren tone that barely soars up and down, the alternate wail introduces an extra layer of variation as a source of “musical material.” Given its penetrating sonority and loud volume, the siren call can be a promising material for field recordists or sound artists. Field recordists often face the challenge of recording sounds clearly from a distance. The siren is loud enough to be heard throughout the city, and its volume is great enough to mask other noises in the background.

In the realm of electronic music, creators draw inspiration from soundscapes of all kinds to create musique concrète or acousmatic music. Incoming MFA student Ernest Strauhal spotted the notable use of “alternate wail” in experimental electronic musician Arca’s “Siren Interlude.” Strauhal recalls his own use of an ambulance siren in “The Ambulance Ride.” The track is from “Beuys 1974,” an album commemorating Joseph Beuys’ centennial birthday. The use of such a sample was a parallel to sonic narrative device for Beuys’ performance “I like America and America likes me.” Speaking of inspiration from the Chicago siren, Strauhal imagines stretching and distorting the sample, a usual practice in his works, to create a contemplative sonic space and reprieve from the over-stimulations encountered by many internet users.

Besides the potential musical use of the Chicago siren, one should also honor its actual alert function. In response to the warning system, local pharmacist Wendy Ko comments, “When a [tornado] watch happens, nothing. If [a tornado] warning [is issued], [you are] supposed to go to the basement or protective area.” Tornados, at first glance, have a rather low casualty compared to gun homicides or car accidents. According to weather.gov, “In an average year, 800 tornadoes are reported nationwide, resulting in 80 deaths and 1500 injuries.” This statistic is far less than lives taken by gunshot per day in America — as Team ENOUGH cites, “Every day, 106 people die from gun violence.”

You might ask if Chicago is prone to such a devastating tornado. Should we be worried about that? Statistically, tornadoes hit suburbs more often than in big cities. That said, the Plainfield tornado, ranked F5 (the highest possible level), struck Illinois on August 28, 1990. It claimed 29 lives, injured 353, and caused $165 million of damage. Another devastating incident was the Oak Lawn tornado outbreak across the Upper Midwest on April 21, 1967. Forty-five tornadoes formed during this outbreak, five were F4 tornadoes. One F4 tornado reached Oak Lawn, a town 15 miles southwest of Chicago, killing 33 people. The whole outbreak that day killed 58 and injured 1,418. Locals call this the “Black Friday.”

Though tornadoes can form anytime and anywhere in the US, they typically revolve around the Central and Midwestern states from March to June. The likelihood of incoming SAIC students hearing the tornado siren in fall semester seems low (and folks say that the “alternate wail” has phased out at some spots), but it would not hurt to get familiar with proper disaster preparedness. For instance, Alert Chicago advises to: “Move to a pre-designated safe place such as a basement. If a basement is not available, move to an interior room or hallway on the lowest floor” and “stay away from windows.” For other tips, check out Alert Chicago’s Tornado preparedness. To see more Chicago tornado sirens in action, check out the Chicago tornado sirens compilation.