Today, the ‘F’ Stands for Freshmen

The in-person 2022 Freshmen Orientation, through the eyes of someone who didn’t get one. 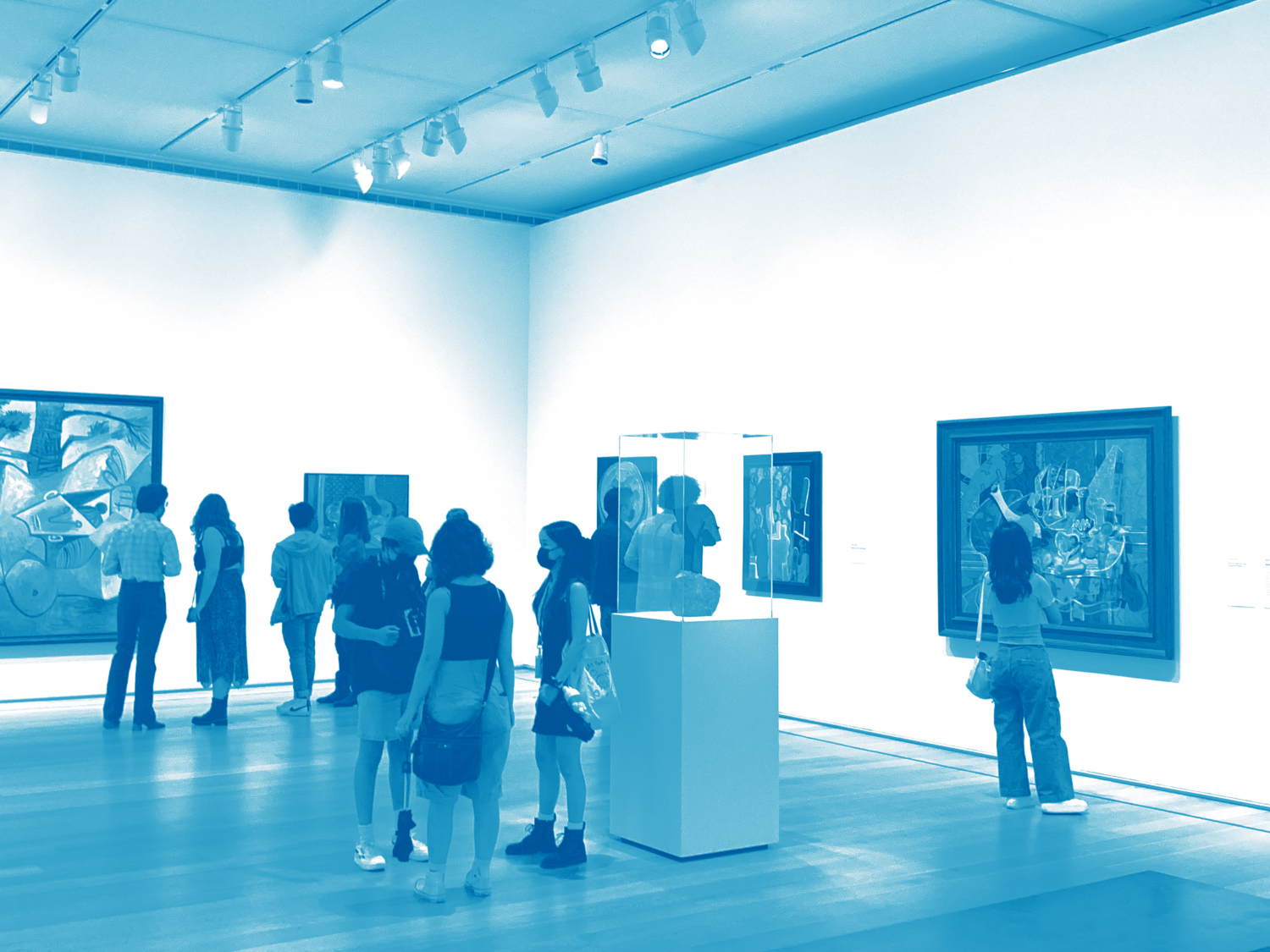 As the day comes to a close, the freshmen are given the opportunity to tour the Modern Wing of the Art Institute.

On Sunday, Aug. 28, over 1,000 freshmen filed into the classrooms throughout SAIC’s campus for what was the first fully in-person freshman orientation since fall 2019. During the COVID-19 pandemic, the 2020 Freshman Orientation was done entirely online. Without an in-person Welcome Week — which includes a Chicago neighborhood tour, a resource and vendor fair, and an opportunity to visit the Art Institute’s Modern Wing —  many freshmen were left to their own devices when it came to getting familiarized with both campus and city life.

By fall 2021, the SAIC administration announced a return to an in-person orientation with a modified program. While this gave the 2021 incoming class a better opportunity to get familiarized with the school, many students found themselves quarantined in the dorms through Welcome Week due to Chicago’s travel advisory at the time. This year, many restrictions were lifted, allowing for larger groups of freshmen.

This year’s orientation was not only special for the incoming class, but also for the Orientation Leaders (OLs) who missed out on these activities their freshman year and could finally experience a somewhat normal Welcome Week. As a junior who never got to experience an in-person orientation, I spent the day following around and interviewing OLs as they guided their freshmen through Welcome Week activities. 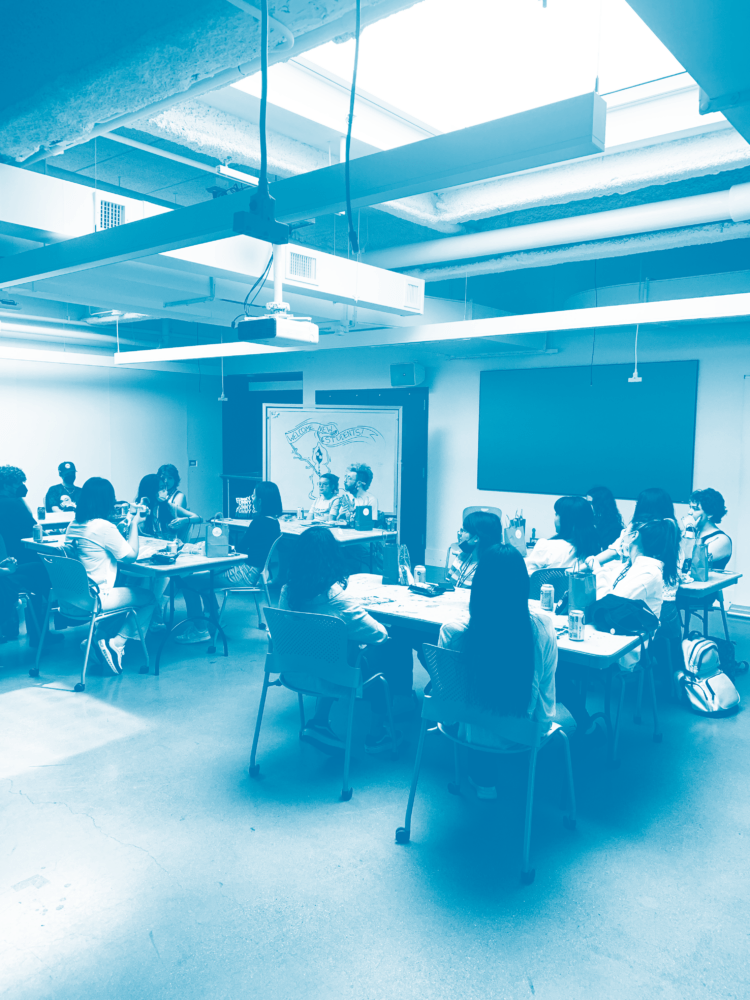 11:00 a.m. — About 30 freshmen file into Room 308 of the 280 Building, each of them with catering bags of sandwiches in hand. Orientation leaders Paul Marx (BFAAHT 24) and Chana Schwitzer (BFA 25) sit at a table in the front of the room. After everyone files in, the green-and-pink-haired duo introduce themselves, they begin with an icebreaker of typical introductory questions, sprinkling in the zinger of “What was a piece of media that shaped who you are today?”

12:00 p.m. — As the group waits for the afternoon neighborhood tour to begin, they write their favorite songs on the whiteboard to make an Orientation Group Spotify playlist, and play it as they then make collaborative drawings on the wall and mingle with one another. One of the tables starts to bond by playing games over iMessage with each other. Another group stares up at the projector screen critiquing the techniques used in a “5 Minute Crafts” video. 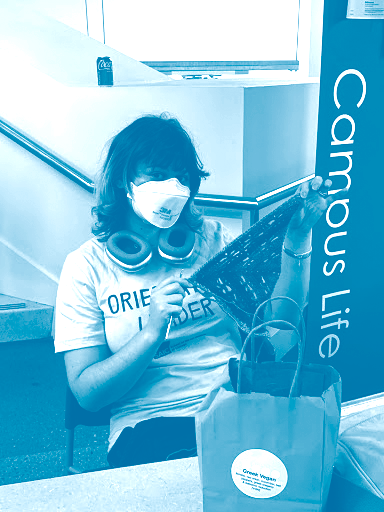 Senior OL Tess Vega crochets away after a long morning of signing in freshmen in the lobby of the 280 Building. Photo by Mimi Ozormoor.

1:00 p.m. — As Marx and Schwitzer prepare to take their group to the Logan Square Farmers Market for their neighborhood tour, Senior Orientation Leader Tess Vega (BFA 24) crochets in the lobby of the 280 Building after a morning of helping freshmen sign in and giving them their lunch. A returning Orientation Leader, Vega enjoys her promotion to SOL as it allows her to have a clear and defined start to the school year — something she didn’t have her freshman year — while also not having to be in charge of a group for the day. “I basically had nothing because we were all online, so [this year] is a lot better. And I think I’m trying to make up for that by continually doing orientation after my freshman year.”

1:30 p.m. — I then return to Marx and Schwitzer’s group as they made their way to the Monroe Blue Line stop. It was the first time I’ve seen this many people casually gathered on the platform in one group. Prior to this, boarding the CTA in groups even half their size was overwhelming to me. At first I thought they would be annoyed by the 15-minute wait time for the next O’Hare-bound train, but the group was perfectly fine and used the time to get to know each other more. 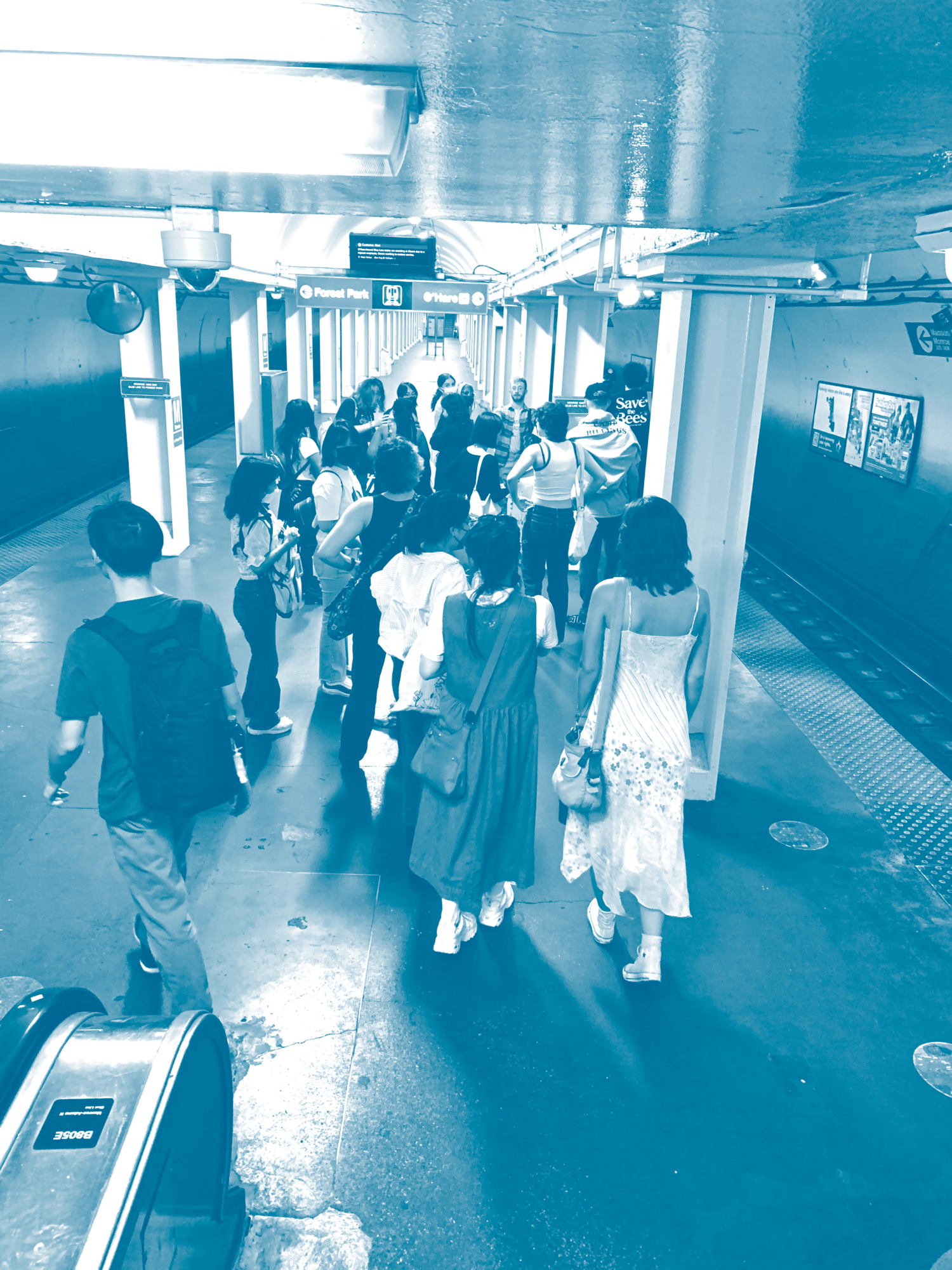 2:00 p.m. — Getting to Logan Square, the group stops at the Pokemon Mural right outside the station and designates it as the meet-up spot. The students are given the choice of going to the Sunday Farmers Market, exploring the various shops and restaurants in the Logan Square Historic District, or to relax on the boulevard and soak in the sun. Having not been exposed to the broad range of places and events in Logan Square until my sophomore year, this neighborhood was a great place to get familiarized with everything. This idea was not just thought of by Marx and Schwitzer’s group however, as fellow OL Carmela Murphy (BFA 24) also decided to bring her group to the market. A current Logan Square resident, Murphy took her freshmen here to check out the vendors and get accustomed to taking the CTA, as she was scared to use the buses and trains at the start of her freshman year. “It’s cool that we get to make everyone feel comfortable and meet people,” Murphy said when asked about her favorite part of being an orientation leader. 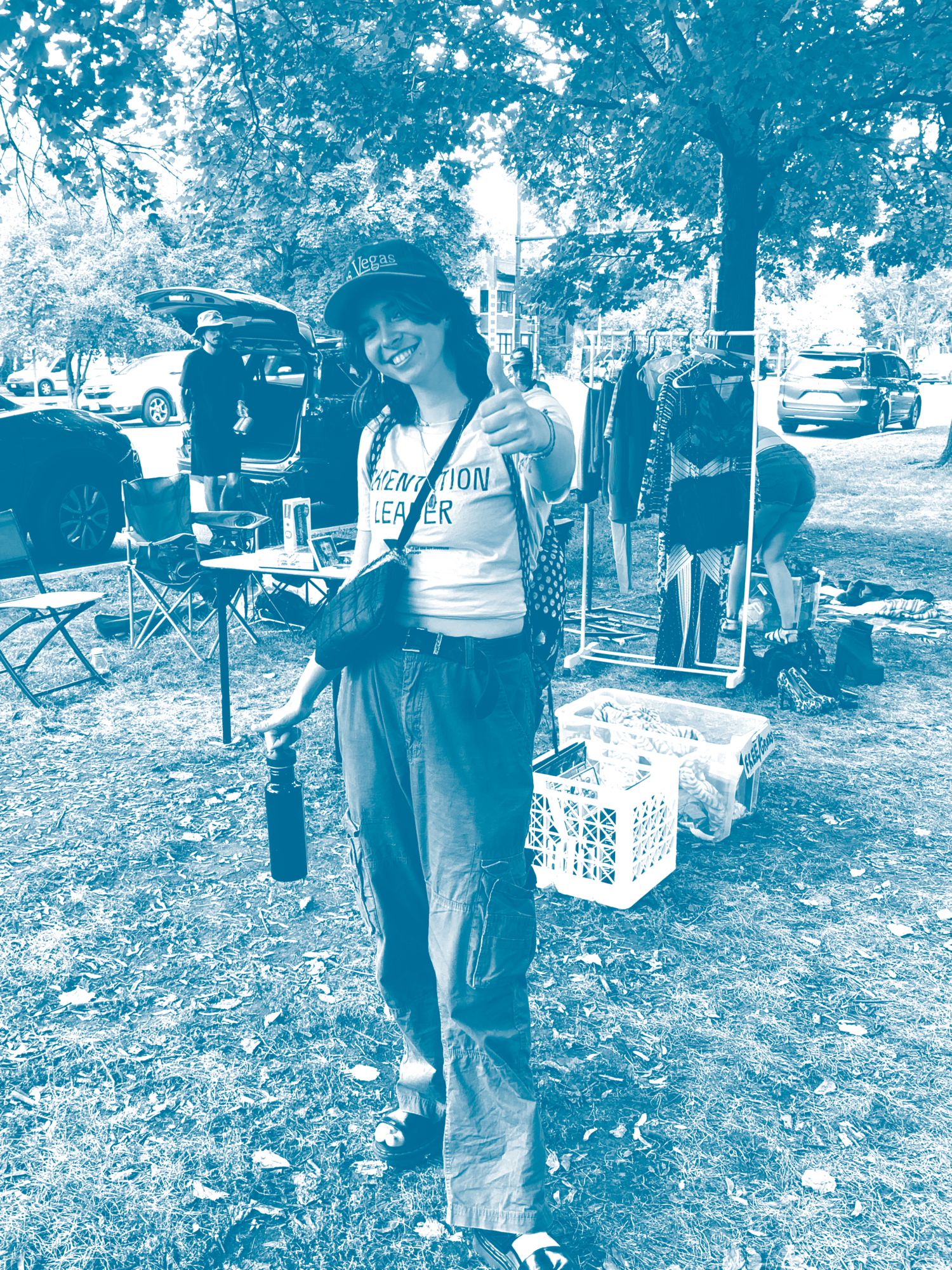 5:00 p.m. — With their new shopping hauls, the group returns to the Loop for the Welcome BBQ, a way for the freshmen to interact with each other outside of
their orientation groups while the OLs also get to reconvene before heading over to the Art Institute for welcome speeches.

As the day comes to a close, the freshmen are given the opportunity to tour the Modern Wing of the Art Institute. Photo by Mimi Ozormoor.

6:00 p.m. — At the Art Institute’s Modern Wing, SOL and Class of 2026 Social Media Coordinator Kyli McGuire (BFA 24) sports the straw hat that is seen in their online profile picture in order to be recognized by the freshmen online. “It’s kind of surreal to see how all of [the freshmen] have developed in their SAIC journey because there’s a lot of them who experienced a lot of different things leading up to this” McGuire said when asked about what it’s like to meet the freshmen they facilitated over the last nine months for the first time.

6:30 p.m. — On the stairs of the Modern Wing, Associate Dean of Student Affairs Patrick Spence, Vice President and Dean of Student Affairs Felice Dublon and SAIC President Elissa Tenny give speeches to the sea of freshmen, with the Orientation leaders in their bright yellow shirts scattered about. Two years ago, this gathering would have been unimaginable, but this year, both freshmen and OLs alike got to feel a part of something bigger as Tenny said, “As of today, YOU are the School of the Art Institute of Chicago.”

Mimi Ozormoor (BFA 2024) is the Engagement Editor for F Newsmagazine. In their spare time, they enjoy lolly-gagging, tomfoolery, and general acts of silliness.

The Song Remains the Same: David Hockney’s ‘Arrival of...