Remembering an SAIC student through her contributions to the Anti-Racism Committee’s inaugural book club. 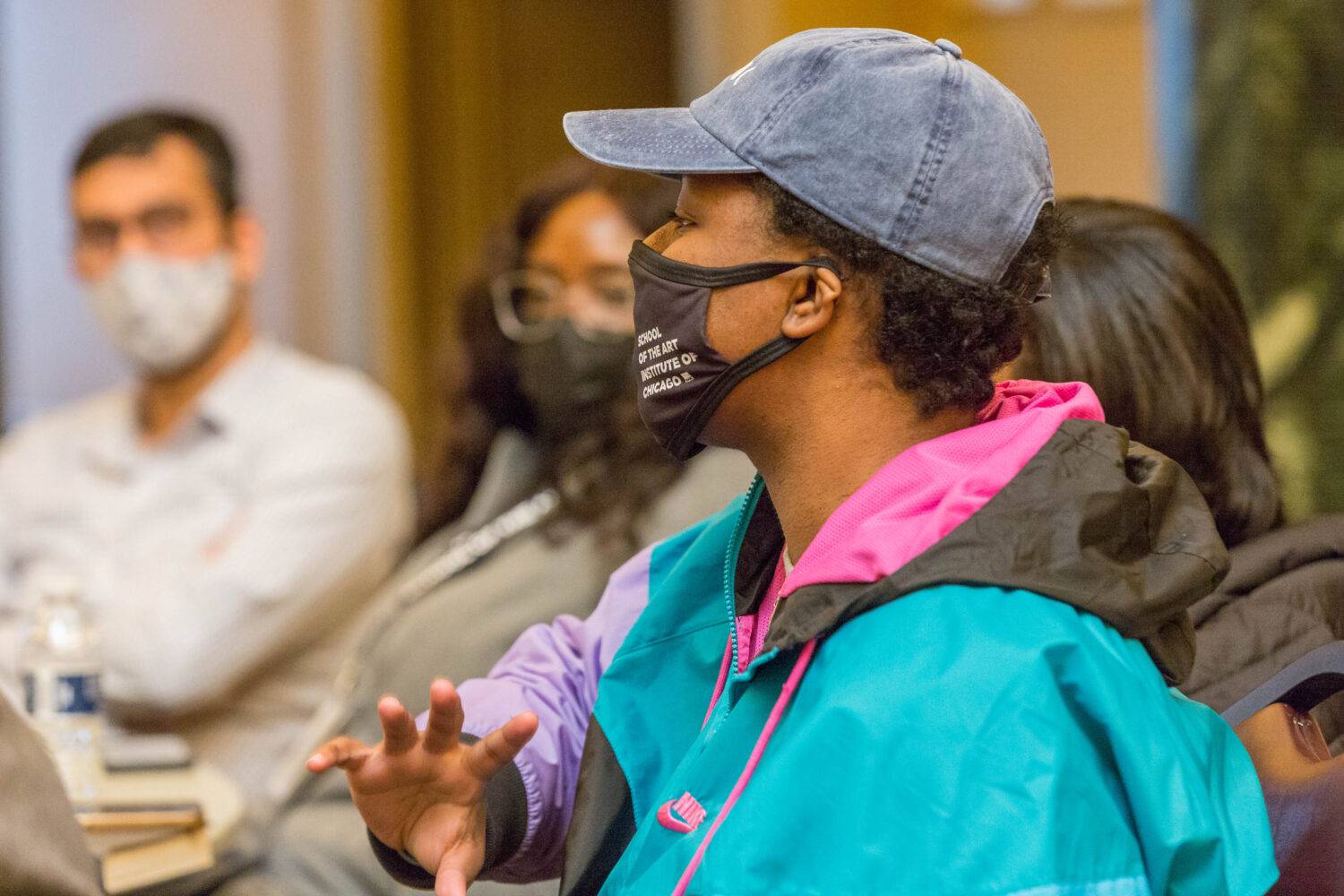 During the past semester, SAIC’s Anti-Racism Committee (ARC) held three, community-wide book club meetings to unpack Isabel Wilkerson’s “Caste: The Origins of our Discontents.” The inaugural ARC book club is tied to the passing of Danielle Tyler after the final meeting on April 27. Tyler was a leader in the community and facilitator of the book club.

Aware of Tyler’s work to uplift Black voices through her performance, curation, and pursuit of a Masters in Visual Critical Studies, ARC tapped Tyler to present at each meeting and lead discussion. To her last day, Tyler potently summarized and analyzed American race relations and invited people into that difficult conversation. She lived the truth that community is the antidote to oppression.

All of the student, faculty, and staff panelists had smart and challenging things to say about Caste, but Danielle, especially, brought a metatextual thinking to the discussions themselves. She encouraged us to be aware of ‘what do we know already,’ and identify when one’s experience and wisdom was misaligned with the text. “Pebbles in the shoe,'” she called them, making the collective consideration of a book also be an opportunity for sharing, problem-solving, and connection.”

Tyler facilitated open conversation at the final book club. In “Caste,” Wilkerson argues that no matter the level of achievement of a Black person in America, she will still be of the lowest caste in this country. The abuse of the lowest caste sustains American history and its institutions. So how can one untangle from the institutions that determine wellbeing, yet are undoubtedly part of the problem? As Patrick Lynn Rivers, liberal arts faculty, said during the second meeting, “I have to underline that we are an institution,” and institutions embed caste.

Book club participants voiced that Blackness is too rarely given space to be authentic. As Issa Rae, star of “Insecure” told the Atlantic last year, she was “deathly afraid of losing an opportunity by being a bit too authentic,” when non-Black Hollywood executives told her her stories weren’t truly reflective of Black experiences. As Rae is Black, this appraisal makes no sense. Tyler understood the contradictions she and other Black people are made to live in. “In trying to pick and choose all these little things,” Tyler said, “we have a range of inconsistencies.”

“It’s not easy in academia to sit in that disorder,” said fellow presenter Payton Harris-Woodard (MFA 2022). Harris-Woodard creates large scale oil paintings that are often self-portraits. The disorder manifests in the critical reception of her subject matter of Black figuration: “People want disruption, yet punish disruption.” Harris-Woodard makes art in a moment when, as writer Jennifer Wilson has said, people are turning to Black artists for answers rather than for art.

Harris-Woodard recalled her elation to receive a full scholarship to SAIC. Celebrating with her family, her joy was punctured by the thought that, “it’s only because I’m Black.” Another student responded, “And don’t feel bad about that.” Giving scholarships to Black students, who will experience more barriers to education, is one of the ways SAIC can intervene.

Impressing the ideas of “Caste” is an intervention. To illustrate the global consequences of Western imperialism on race relations, Wilkerson described the Portuguese colonialists in the New World who stratified colonial populations according to Black, Indigenous, and white ancestry, then exported the term “sistema de castas” to India to describe the descent-based groups found in that part of the world. Wilkerson told her reader about the architects of Nazism who looked toward the Jim Crow South for guidance on social policies.

At the end of the night, the conversation turned toward future iterations of the book club, and in particular, which book should be read next year. Turnout to the book clubs diminished as the page count increased (”Caste” is over 400 pages). That last night in the ballroom, we numbered less than fifteen.

One student suggested that the school highlight an author not steeped in academia. Highlighting the “best of the best” has its own problems of erasure. That student suggested “Homeless Lives Matter” by Leo Gnawa. Another promising candidate is the “March” graphic novel trilogy by John Lewis which illustrates the history of the Civil Rights Movement from the particular perspective of nonviolence.

The conversation next year will lack a wonderful voice. Danielle Tyler will be remembered as caring and vibrant, and her loss hurts.

Danielle was an amazing curator, creative mind, colleague, and most of all friend. She advocated for my work, before I even knew how to advocate for myself. I am thankful for what she has taught me, and am so glad to have experienced her light. I  will cherish our memories, and remember our talks and laughs

Michaela Chan (MFAW 2023) is the SAIC/news editor at F Newsmagazine.

Moving Pictures: ‘Hustle’ and the Effortless Charm of Adam...

From the Vault: LGBTQ+ Internet Archives