“Quaternity”: A Chess-like Community For Just About Everyone

Not quite chess and not quite a conventional video game, “Quaternity” may evade definition, but provides a non-gamer with a sense of community.

By Priyanka Kumar May 16, 2022 Entertainment 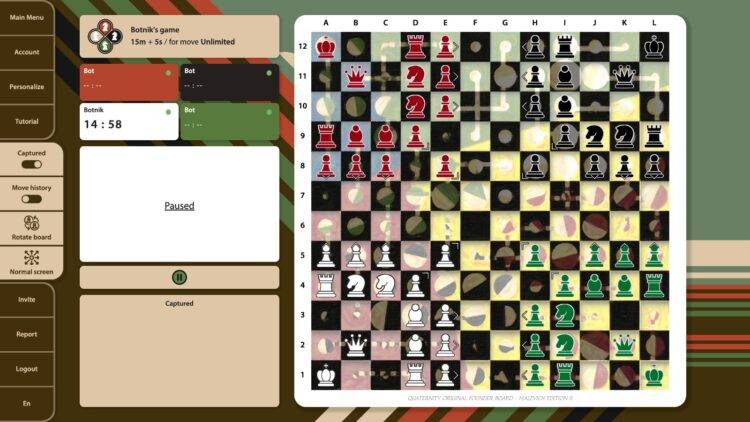 Picture courtesy of the author.

I am not a gamer.

As the younger sister of a brother who loved video games, I tried many times in my childhood to be one. But I never succeeded. The closest I ever got was being my brother’s number one cheerleader when he played “Tekken 4.” Truly, my brother even found a way to beat me at “Sims,” when we were playing the two player version of “Urbz: Sims in the City,” and he completed the game before me.  (If you didn’t know that was possible, well now you do.)

Gaming was always something that seemed out of my league. It was something that I always wanted to do, but was never able to excel at. My personality is incredibly competitive at its core, and while my adult self has learned to be more measured in that regard, it’s been a journey getting here. This meant that when I tried and tried, time and again, to be good at something that I never measured up to, I eventually gave up on it. And as fun as video games were, they could never beat out the competitive side of me that desperately wanted to play to win.

“Quaternity” is a new game that is only now being introduced to the market. It’s a four-player game that’s based on the principles of Chess. It’s so new that the chances of you having heard about it are not very high. The team behind it started developing it seven years ago, and after multiple rounds of beta-testing, it has finally been released to the general public.

Before you arrive at some fair, but quick, conclusions, “Quaternity” doesn’t actually feel anything like Chess. Because it’s four players, involves a bigger board, and a different opening position, it feels much more alive. Where everything is based on order in Chess, in “Quaternity” I always feel like I’m constantly toeing the line between control and chaos. And I can never predict which way it will go.

The objective of the game is simple. Checkmate your opponents. Because Quaternity is structured differently, the first checkmate is worth the most number of points — 2. The second and third checkmates are worth 1 each, and if you get all 3 checkmates, you’re the lucky player who’s going home with 5 points.

The objective is simple. The journey there is anything but.

Full disclosure — at this juncture, since I started playing the game seriously, I have become more involved in the playerbase’s community and with the developers’ social media. Despite having never quite been attached to video games before,  I found a space within the “Quaternity” community where, for the first time, it was okay for me to be a beginner and play with people far more experienced than I, while still feeling like I was a part of that culture. Of note here is that I had the chance to play not only with people of different skill levels, but also people from around the world, and form a real connection with them.

In all the time I’ve ever taken steps to try to be a part of a community, I always found that I was forced to fit into a predetermined box. (People are multifaceted. What a revelation.)  When I was trying to be good at video games, I was only ever passable at “girl games.” When I was a chubby twelve-year-old dancing ballet, I was “too big” for the dance form. When I was a “nerd” who got good grades, I wasn’t good at sports and games because I was only booksmart. At every point, in every community I have been a part of, there’s always been a “but,” because at every point, I could only ever be one thing.

It sounds cheesy, and maybe even unbelievable, but with “Quaternity” — so far, anyway — that hasn’t been true. Where so many other games always felt very “gatekept” to me, in “Quaternity,” I felt I could simply show up as myself, wherever I was at, and it was okay. It is okay.

Realistically, I was clearly all of those things at different points, and simultaneously none of those things all of the time. I’m not always a selfish player, but neither do I cooperate with others’ unspoken strategies all the time. But the fact is, any of those personalities and play styles could have been my reality and became my reality, even if just for a moment.

Whenever I talk about “Quaternity” with my friends, many immediately turn off when they see and hear the Chess connection. It’s hard to be open to the possibility of something with a familiar form being nothing like you expected, and in a world of preconstructed boxes, they have been told they don’t fit into that one. It’s a shame. From where I stand, the constant creation of those rigid frameworks are exactly why I always felt I could never be a gamer.

And maybe, just maybe, that is enough.

Entertainment “Quaternity”: A Chess-like Community For Just About Everyone
« Previous Story