Charli XCX opens her clawed hands to listeners on “CRASH,” inviting them into a lush allegorical album about power, control, and reclaiming what’s yours.

By Vienne Molinaro May 13, 2022 Entertainment, Featured 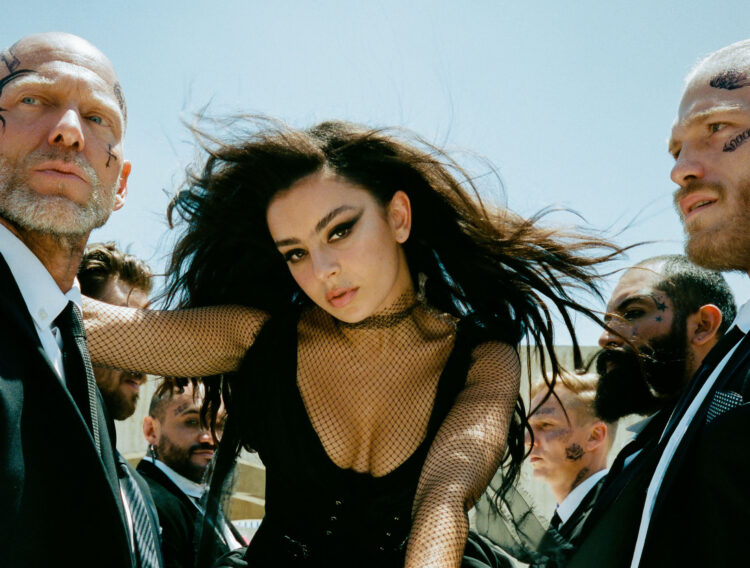 Last summer, Charli XCX emoted the following in a “questions I get asked” TikTok:

1. ‘how should i deal with major record labels?’ just say yes.

The TikTok became the prologue of cult-symptomatic aesthetics that disrupted her Instagram feed. A bloody and broken nail. The Everlast chastity belt from “Men in Tights” (1993). Charli’s grave with Mar. 18, 2022 set as the death date.

That was the date that “CRASH,” the glossy, luxurious fifth studio album by Charli XCX, released. It also marked the conclusion of her five-album deal with Atlantic Records, a contract that took her 13 years to be free from, which essentially “died” with the album’s naissance.

It’s a tale as old as music history — a naive sixteen-year-old artist signs to a major label, and is promised a lavish career in return for a marketable discography and image. An optimistic prospect for any young artist with a vision and glitzy likeness, but this often results in more frustration than what was promised, as the young artist is forced to give up almost all creative control on their work. It is not uncommon for record labels to be surrounded by speculation over how they treat female artists, and Charli is a victim of said hysteria. But are the speculators wrong? We can’t quite be sure.

Emerging as a pop album rich with satirical homages to the Illuminati, pop girl initiation, and 80’s synth campiness, with a choreographed dance for almost every song, “CRASH” opens its clawed hands to the listener, inviting them into Charli’s allegorical album.

Costumed as a vixen hissing sardonic advice to aspiring artists (tip for new artists: it only gets worse), Charli takes on an evil alter ego: a satirized product that many artists get labeled by superstitious “Illuminati hunters.” Stylizing her titles in vampire-red font, while clad in R&M Leathers and a charismatic “She Wolf” blowout, Charli’s hyperpop, Moschino-wearing party girl persona that has been upheld and beloved by fans has undergone a drastic transformation; inevitably destroyed by labels and their contracts that leave artists grasping for control.

Leave it to a Gemini Mars to have an aggressively vibrant relationship with cars, something that Charli is self-aware of. “Whether it be lyrically or visually, the idea of the title ‘CRASH’ felt really right to me…” she confesses to MTV. And though she confirms that the album cover – Charli, covered in blood in a black bikini, hovering above a cracked windshield – is up for interpretation, it speaks to the louder volume of the album’s duality. On the surface, the album is a conceptual synonym for how “hellish” record labels and the industry makes artists feel, but if you dive a little deeper, “CRASH” and its references to pop anthropology is a love note to Charli’s fans, her “Angels.”

Since the start of her career, Charli’s discography has been “-pop” suffixed by critics, the public, and even her fans. Indie pop. Electropop. Bubblegum pop. Hyperpop. “CRASH” adds itself to this list, a “luxpop” genre encompassing Y2K club music, living room dance tracks, and vintage samples for her more quick-eared students.

Working with creative director and long-time collaborator A.G. Cook and The 1975 drummer George Daniel on title track “Crash,” we are brought onto a synthetic neon dance floor that sets the scene for the rest of the album. Standing in as a puppeteered girl group on late night television in its music video, “New Shapes” featuring Christine and the Queens and Caroline Polachek hangs off of the luminous nostalgia the opening track sets up, and bleeds into a bright ballad about wanting something you know you’ll never have.

Adding to the cast of industry-possessed characters is “Beg For You” featuring Rina Sawayama. Sampled from September’s “Cry for You,” Charli and Sawayama lament a long-distance love, engaging in a blood oath in the track’s music video. “CRASH” stays consistent with its storytelling —  Charli is still a girl in an industry that is relentlessly vile, but its focal point eventually becomes a new love slowly taking over Charli.

With subtle nods to early-2010s discotheque hits, “Used To Know Me” soundtracks her final transformation from Charli XCX the artist, to Charli XCX as a bonafide pop girl. Playing dress up in the music video, Charli references the different aesthetic eras her fans experienced throughout her career. The most memorable costume change would be the “Crash” cheerleader getup, including a black spandex undergarment by Agent Provocateur with “SELL OUT” bedazzled on the back, and the Atlantic Records logo mockingly bedazzled on the front, which you can now get your hands on for a casual $5000.

Where the residue of hyperpop doesn’t take up too much of the album’s space, traces of Charli’s hot pink, lipstick-stained love songs haven’t gone anywhere. “Yuck,” the onomatopoeic pop tune that conceals a clichéd first blush at new romance before it gets darker; the sincere, albeit pessimistic twist of the romance novelist.

The same pessimism can be seen in the album’s existential closer, “Twice,” set to a tropical island-beat backing. An apocalyptic finale that was foreshadowed in the album’s opening lyrics (“I’m about to crash into the water, gonna take you with me”), Charli cites the closing scene of Lars Von Trier’s “Melancholia” (2011) as the visual inspiration for the lyrics. “Up on the hill, we’ll see it all end / Die happy thinking ’bout my best friends.”

The album feels and exists as visually as it was meant to be; a cohesive potion that rocks back and forth between pop stardom and a seductive storybook. Enjoying the album and its video counterparts is enough to entrance you in this world that Charli has created, but it is another, Lightning-infused experience to watch her perform it live.

There’s a growing barricade-laden bruise under my arm in the name of Charli XCX, one that became the result of spinning visuals of clouds, accelerators gaining speed, and partying with my best friend as Charli and her dancers, Nathan Kim and Grant Gilmore, dazzled the sold-out and final show of the first leg of the album’s tour at Chicago’s Aragon Byline Ballroom.

Opening with “Lightning”, beautifully backlit by a monstrous sea of clouds, dazzling the crowd with her voice, Charli strutted down the stage’s platform as she emerged from the shadows just in time for the song’s first hook and chorus — an enchanting representation of who she truly is. A shadowy pop songstress, finally in a light of her own? Only the future can tell.

Auteur Theory: Where Have All The Uncomfortable Movies Gone?

“Quaternity”: A Chess-like Community For Just About Everyone