Examining the constant snubbing of BTS at the GRAMMYs, and what it takes to succeed in the Western world as a non-Western pop act. 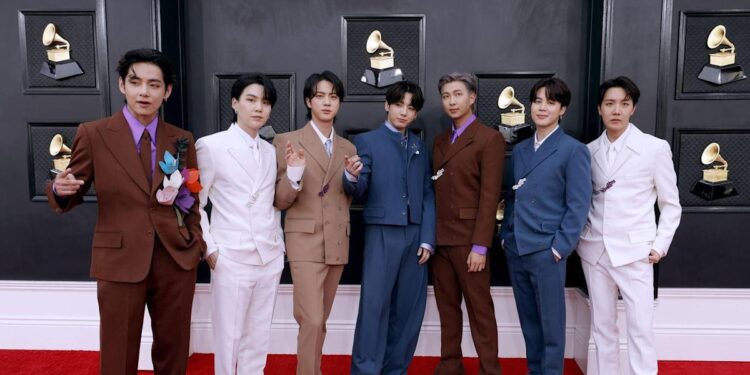 On Apr. 3, 2022, the GRAMMYs conducted their first in-person show after two years of a pandemic. Notably, of all the awards given out that night, the award for Best Pop Group/Duo Performance was not given to a particular artist for the second year in a row. That artist? Only the world’s most famous pop group, BTS.

BTS’ journey with the GRAMMYs has been highly documented. It took BTS making an all-English song to even be nominated for these awards at all in 2021, despite the fact that a lot of their Korean-language music far surpasses the quality of their first GRAMMY nominated song “Dynamite,” with respect to lyrical complexity and conceptual depth (if not overall production altogether). This is an insult to their talent in and of itself. To add to this, the GRAMMYs shamelessly used BTS’ first performance on the award show of their own music in 2021 — they did perform in 2020, but with Lil Nas X, and did not play a song of their own — to bait ARMYs (BTS’ fanbase) into watching the entire show to increase their viewership.

In 2022, BTS were nominated for the same award again, and yet many of us knew even before the award ceremony began that BTS were not going to win that night. Not because they didn’t deserve it, but because the GRAMMYs — the perfect symbol of the American meritocracy — was never going to celebrate a foreign musical act by giving them an award they have earned in spades. Let’s remember, only those who pull themselves up by their bootstraps (and speak in perfect Western-European English, assimilate into European-American culture, or oppose it in the “allowed” ways) truly succeed in this country.

When I first moved to the US in 2014, bright-eyed and bushy-tailed, albeit majorly apprehensive, I was incredibly excited to be surrounded by a new culture, a new people, and a new environment that would allow me to express all the parts of myself I’d never had the chance to before. The US was a melting pot where people were judged based on their skill, and I was finally going to have a chance to be a part of that.

I did my best to assimilate. I taught myself how to speak English — a language that’s been my first language my entire life — with an American accent to account for the fact that people didn’t seem to understand what I said unless I did. No joke, I was once actively helping a friend with an essay and she spent five minutes dissecting my pronunciation of the word “iteration” because I didn’t pronounce it as Americans do. No matter how much I assimilated, how much I butchered the names of foods, and practices from my home country (which I sheepishly admit, I did for the first few months of living in the US to try and fit in), I was always just a little too different. I exemplified my “non-resident alien” status too much for comfort.

BTS have sold out stadiums. They’ve performed at some of the biggest venues in the world, including the UK’s historical Wembley Arena. They’ve even taught themselves how to perform in a third language fluently enough that they can be nominated for multiple awards for it. (Yep, English is the third language they now perform in.) Similar to many other Korean music groups, they have released several Japanese singles and more than one Japanese album which were praised, and even charted, in Japan. Yet, when it comes to American award shows, the fact that they are Korean will always make it so that they are successful for being foreign — as if nationality pre-dictates talent or skill. In addition, even though their parent company HYBE has even acquired one of the biggest music labels in the US — they are still Korean, i.e. they are still not American (again, more accurately, European-American.)

One of the ways award shows have also tried to account for the criticism leveled at them for being exclusionary is by including more foreign pop categories. In this case, I’m referring particularly to the 2019 addition of the K-pop genre to the VMAs. This feels like more of a token acknowledgement of the contributions of Korean music to the current scene, and even more of an indicator of their exclusionary principle by calling it K-pop, rather than simply adding them to the Pop category.

What’s more, if it’s truly “K-Pop,” what feels even more arrogant is the assumption that an American show can be any sort of deciding factor on what the best Korean-pop album is. But that’s a whole other essay for another time.

BTS isn’t the first foreign act to not be recognised by American award shows despite their undeniable influence. Taiwanese artist Chyi Chin is considered to be one of the most influential names in both Taiwanese pop music and Mainland Chinese pop music, and yet his name is almost unheard of outside of those circles. Even a singer as well known in the United States as Bob Marley was not recognised during his time. The GRAMMYs only awarded him the Lifetime Achievement Award posthumously, 40 years after he died.

This is just the tip of the iceberg. Consider Nigerian funk musician William Onyeabor, Japanese singer-songwriter Taeko Ohnuki, and Libyan-Egyptian pop musician Hamid Al Shaeri. Onyeabor, known as the “recluse’s recluse,” has, amongst other compliments, been called a disco innovator, and is considered by some to be the founding father of Nigerian electro Afro-funk. Ohnuki, a giant in Japanese pop, is said to be a pioneer of the city-pop genre; Al Shaeri is considered monumental in the Al Jeel music scene. All of these musicians have been incredibly instrumental to the sounds we hear on our radios today irrespective of whether we are aware of it.

This said, there are of course those foreigners who have seemingly beaten the odds. Renowned Indian composer A R Rahman won two GRAMMYs for his song “Jai Ho” in Slumdog Millionaire. However, a deeper look shows the movie, while based in a (stereotypical) Indian context, is in fact a British drama film. It also often appears that “Jai Ho” is celebrated because it won a GRAMMY. Much of Rahman’s previous work, and much that has come after, are far more deserving of the award — even though they’ll likely never see it.

All this begs the fundamental question, if Western award shows are in fact as provincial as careful observation demonstrates, why are they continued to be marketed and held as the international standard?

In the seven years I’ve lived in the US, my accent has been called “cute.” I have been praised for my excellent command of the English language — I’m Indian; we’re an ex-colony of the Brits. Look it up. In fact, in the first five years that I lived here, people were often so confused at my ability to speak English well that I eventually just started saying I was from the East Coast, because I knew that no one would bat an eye. (Having said this, I’d also like to take this opportunity to remind people that the United States of America is not in fact a native English speaking country; English has been imported here just as much as it was imported into India.)

No matter how much I’ve tried to assimilate (to be clear, no longer to fit in but simply so I don’t stand out), at the end of the day all it takes is me pronouncing one word differently, or me forgetting to round my “r’s” in the way Americans do, for people to immediately want to know if I am Hindi and speak Hindu.

What does it truly take to be accepted and successful in the US? And how is it that a country that is marketed as the ultimate melting pot has, in actuality, one of the most exclusionary societies in the world? The answers to this are as complicated as the identity politics of those who immigrate here, chasing the American dream in hopes of providing a better life for their families, and themselves.

BTS (and so many others) may never win a GRAMMY. That is the unfortunate reality that the US lives, and has lived, in. But perhaps it’s worth noting that in a changing world order, those who have the ability to be truly multicultural will be far more relevant in a future as global as the one we’re moving towards than those that hide their xenophobia behind the guise of a flawed meritocracy.

Entertainment, Featured And The Grammy Goes To…
« Previous Story