Resume Gaps: How I Got Fired From My Job as a Server

A series of essays by people in the SAIC community about their worst job experiences. 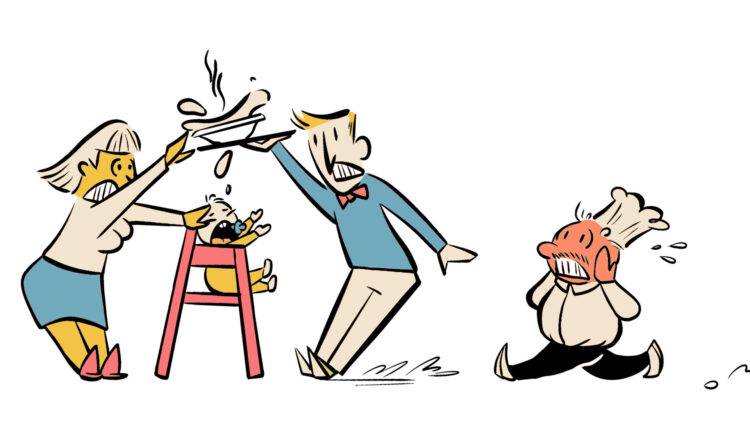 Resume Gaps is a series of essays by people in the SAIC community about their worst job experiences.

Let me just get this out of the way up front: I spilled curry on a baby. Maybe that got a laugh out of you, maybe you think I’m a bad person now, but either way it happened, and it was how my stint as a server slash bartender at a Thai restaurant in Columbia, Missouri — my worst job ever — came to an end.

When I interviewed for the job my soon-to-be-boss, let’s call him James, beckoned me up to the mezzanine level of his establishment. There were no lights on up there and he was seated alone at a table in the corner with a clear view of the restaurant floor below. I would later learn that one of my boss’s favorite habits as a restaurant owner was coming in via the second floor entryway unannounced and sitting in the dark at one of the tables in this section, quietly watching his staff work. Midway through our conversation James pulled open the jacket he was wearing to reveal a pistol sheathed in a shoulder holster.

“I’m pretty much packing at all times, are you okay with that?” He asked.

I had just graduated college as a dual major in English literature and history, and all of my meaningful employment up to that point had been in the service industry. I was desperate for employment and low on prospects. I nodded yes. I likely would have nodded yes if he had handed me the gun and explained that I, too, would need to be armed at all times to work there.

“If you ever see a gun sitting behind the bar just toss it in the safe. Sometimes I’ll set it down and forget it.” He went on.

Loaded guns or not, I liked the sound of being behind the bar. On the floor customers left shitty tips, wrote mean notes, touched you (one time a customer punched me in the back to get my attention when my back was turned) and generally behaved themselves poorly. In Missouri servers are paid a “tipped wage” meaning it is legal for restaurant owners like James to compensate them well below the minimum wage, with the idea that they will make up the difference in tips. Bartenders, meanwhile, have a solid object between them and the customers they interact with, they are paid a real wage, and they have unfettered access to booze.

I enjoyed working behind the bar, but I was a liability on the floor. On a busy Friday lunch, a table of three came in, one of them a mother with a young baby. I was carrying their food out, one plate in my right hand, one in my left, and one sort of cradled between my chest and my left wrist. The plate in my left hand had been sitting on the expo window under a heat lamp for a few minutes, and as such was scalding hot. I carried it out with napkins pinched between my skin and the surface of the plate itself. As I went to set this plate down, the baby’s mother reached for it, at which point I pulled back, hoping to save her from burning herself. At this point another plate with coconut curry went askew in its cradle, spilling a spoonful or two onto the infant, who was in a carrier on the floor.

I set the plates down and began apologizing profusely. I brought over napkins, wet rags, anything I could think of that might be helpful. After a few more rounds of apologies the situation seemed to calm somewhat, and my section was being seated all the while, so I began attending to other tables. I let the front-of-house manager know about the incident, but he either didn’t hear me or thought I was joking because he responded by smiling and walking away.

When the table with the baby I’d spilled curry on finished eating I comped part of their check (I shouldn’t have asked them to pay for anything, in retrospect) and they left a big tip. I assumed my heartfelt sympathies had remedied any harm, but I was wrong. After we closed the manager beckoned me to the bar and asked “did you spill curry on a baby during lunch?” I responded yes and reminded him that I’d told him as much when it happened, but he had no recollection.

The wronged party had called, and they were inclined to seek some retribution, and after a few hours it was decided that I would make a suitable sacrifice. My boss informed me that not only would I be losing my job, but he expected me to write him a letter of resignation like I was the goddamn secretary of state. I obliged, but the humiliation didn’t end there. I received a barrage of texts for several nights in a row from James, explaining how worried he was about being sued and losing the restaurant, how maybe this was all a sign he needed to get out of the business. A week or so later I was asked to come into the restaurant after close on a weekday for a staged reenactment of the incident, which James photographed on a point-and-shoot digital camera. This was for insurance purposes, I was told.

James never lost the restaurant or even faced any legal action, and a month later I started a job that launched my career in journalism. Sometimes when I’m in town I stop by and have dinner on the civilian side of the bar I used to tend. James and I talk like old friends with me knowing that ending my career as a server was a sort of mercy, and hoping maybe he’ll give me a free drink.

Want to write about your own terrible job experience? Email [email protected] to pitch your essay!

Evan Wood is the Literary Editor at F Newsmagazine. He is considering adopting a cat.

Featured, Literature Resume Gaps: How I Got Fired From My Job as a Server
« Previous Story