What can compel a man to yodel through his breakfast? Find out in Nestor Kok’s comic “Yodeling Ghost.” 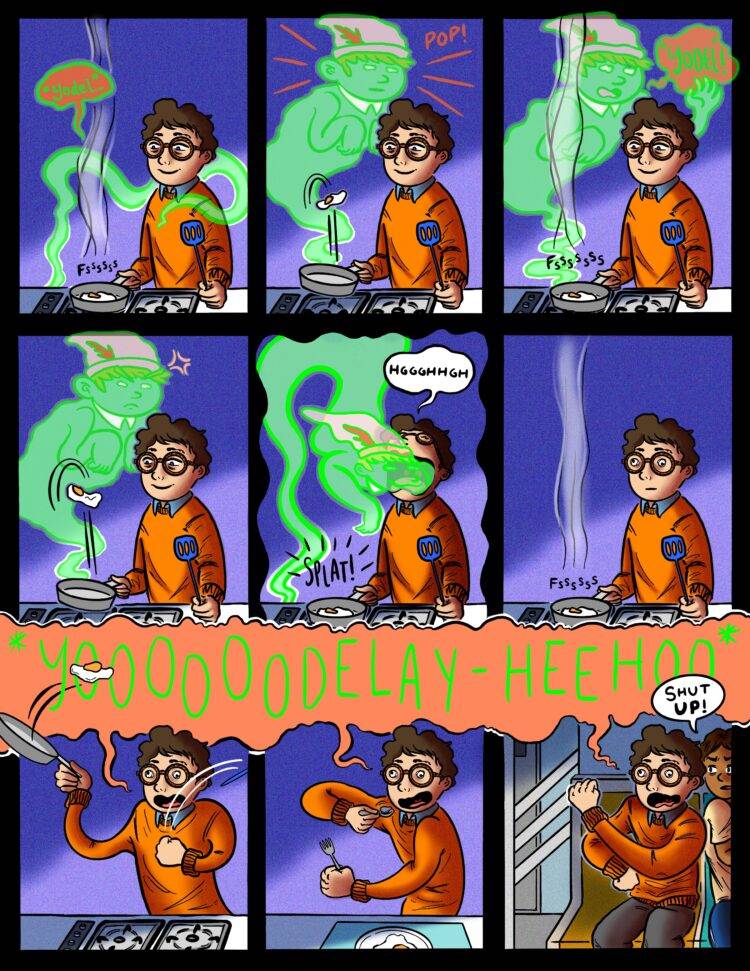 Panel One: A man in an orange sweater with a blue dress shirt collar peeking out underneath it is frying an egg in a pan on his kitchen counter. A green ectoplasmic tendril appears from below the kitchen counter, and a ghostly “Yodel” is heard.

Panel Two: A green ghost wearing a red cap with a feather in it suddenly appears behind the man with a POP! The man does not notice this, and flips his egg in the pan.

Panel Three: The ghost yodels louder, trying to get the man’s attention. The man remains oblivious. The flipped egg lands in the pan with a FSSSSSSS.

Panel Five: The egg lands in the pan with a SPLAT! as the ghost flies into the man’s open mouth. “HGGGHHGH,” says the man.

Panel Six: The man stands there silently, eyes looking in different directions, as the egg simmers in the pan.

Panels Seven, Eight, and Nine: The man lets out a huge “YOOOOOODELAY-HEE-HOO” as he fries his egg with renewed gusto, eats his fried egg, and sits in a train car on the New York City subway. As he sits down, a woman tells him, “Shut UP!”

One Response to Yodeling Ghost