When creatives are canceled, is their art canceled too? 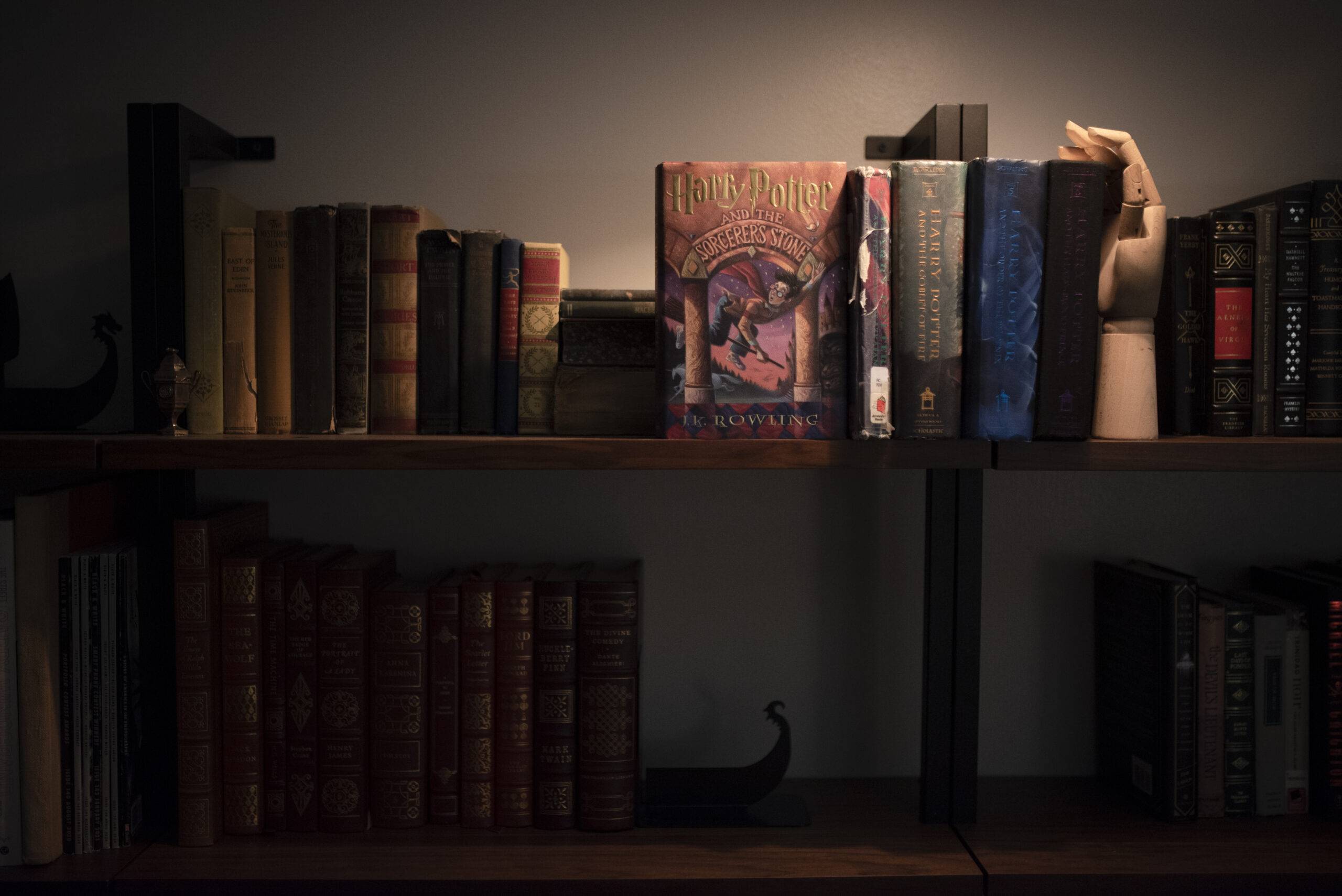 I try not to be one of those grad students who spends all their time sipping on a $5 tea in exchange for WiFi and a public place to work, however, the other day I found myself doing just that at a coffee shop in Uptown. On this particular afternoon, there were three people sitting directly behind me having a loud conversation. I tried to drown out their noise, but I couldn’t help but tune in when I heard them say, “Voldemort.”

“My aunt says she won’t get the vaccine because ‘For the Greater Good’ was Voldemort’s saying,” I overheard. I almost turned around… to correct this blatantly incorrect reference. See, “For the Greater Good” was actually the slogan of the dark wizard Grindelwald, which he developed with his friend Albus Dumbledore. The reason I know this is because I have read all seven Harry Potter books at least twenty times, and I just finished another re-reading of the entire series over winter break. Yes, I was one of those kids who checked the mailbox for my Hogwarts letter the summer that I turned eleven. My WiFi is called “The Floo Network.” I was also one of those people who went to the midnight showing of the movies and finished each new book within 48 hours of release.

The reason I’m talking about everybody’s favorite bespeckled wizard is not to pontificate on Dumbledore or Voldemort or obscure wizarding world references, although if anybody wants to invite me to Harry Potter trivia, I will definitely have a competitive edge. The real reason rhymes with “smurfs:” Chances are you’ve heard of the controversy surrounding J.K. Rowling over the past few years. If not, feel free to take a quick intermission and sip all of the British tea here.

So can I disagree with J.K. Rowling views, but still read Harry Potter? Can we as a society ‘cancel’ an artist, or an author, or a singer, or a podcaster, but still continue to ethically consume their media?

This question is one of my favorite conversation starters to bring up at parties. Typically, nobody lands on a solid answer. Kanye West is one of my favorite musicians of all time, and another name that often comes up during this debate. As a neurodivergent person, Kanye West is more than just a rapper to me: His music is a representation of the beautiful contributions neurodivergent people can offer the world. In addition to being a musical genius (in my humble opinion), Ye has also had his fair share of tabloid headlines. His arguably biggest public blunder occurred on TMZ live in 2018 when he suggested that slavery was a choice. Kanye did apologize, but since then people have been questioning whether or not they can or should continue to enjoy his music. (Including yours truly.)

Another Chicago musician who has been tried in the court of public opinion, and an actual court of law, is R. Kelly. R. Kelly has been convicted of a cornucopia of sexually-based crimes. The social media campaign #MuteRKelly was founded by Kenyette Barnes and Oronike Odeleye in July of 2017 to encourage the Black community to “financially divest” from the musician. Public outcry against the artist reached a peak when the docuseries “Surviving R. Kelly” aired on Lifetime in 2019, leading to the exclusion of R. Kelly’s music from some streaming platforms. Many people have sworn off his music entirely. After adopting an R. Kelly-free diet, hundreds of users on Twitter posted and retweeted pleas for other musicians to re-record his most beloved track, Ignition. I personally have found refuge in Phoebe Ryan’s mash-up version.

The list of famous artists, musicians, and authors who have been “canceled” goes on, and the offenses range from actual crimes to bigotry to bad behavior. Quentin Tarantino has been criticized for his inappropriate tactics on set and the glorification of violence toward women in his films. Sitcoms are impossible to watch without cringing at the sexism, misogyny, and homophobia. (Friends, anyone?) The bromance between Spotify and Joe Rogan has been in the spotlight recently. And Ariana Grande licked a donut.

This question goes far deeper than not wanting to give up our favorite books, musicians, and artists. This question is about cancel culture itself which is really about ethical consumption. Do you think human beings are redeemable and deserving of forgiveness for their mistakes? More importantly, what is the responsibility of public consumers?

Many people, including me, were heartbroken by Rowling’s failure to live by the principles of equity and tolerance preached in her novels. I took the time to read JK Rowling’s personal essay explaining the rationale behind her bigotry. I vehemently disagree with her stance on issues of gender and the exclusion of the trans and non-binary community in feminist discourse. Feminism that isn’t inclusive of and equitable for everyone isn’t feminism. If cancel culture is meant to hold people who cause harm accountable for their actions and encourage retribution, the public does have power to decide what they will consume and how much they will tolerate.

Accountability can manifest itself in many different ways. As public consumers, our power lies in our pocket books. Although I do believe in forgiveness if people are willing to make amends for their actions and demonstrate their willingness to change, I don’t believe in continuing to financially support celebrities or public figures who are actively and unapologetically causing harm. Barnes’ and Odeleye’s idea of “financial divestment” is crucial to this debate: J.K. Rowling still generates income from anything affiliated with the Harry Potter franchise, so I won’t be visiting the Wizarding World of Harry Potter at Universal Studios anytime soon. I certainly won’t be reading or purchasing any of her new books. But what about re-reading the books that I purchased back in the 90’s, the ones that I’ve held in my hands for so many hours, they are falling apart at the seams?

Harry, Ron, and Hermione are so much bigger than J.K. Rowling. When Rowling put her art out into the world, the wizarding world was no longer just hers. Rowling’s art is a concrete part of many childhoods, and I don’t think that we have to completely give that up. I argue that we can hold Rowling accountable, question her politics, and still re-read the books that have brought us joy over the past two decades.

Perhaps, the more readers who continue to challenge Rowling’s ideas, the more likely it is that she will take the time to listen or even change her mind. People are capable of growth. Taylor Swift’s first album in 2006 included homophobic lyrics, but in the summer of 2019 her video You Need to Calm Down was the pride anthem of the summer.

Unfortunately, Kanye has continued to make it harder and harder to defend his actions. Ye’s on again, off again relationship with our former president was questionable at best, horrifying at worst. His 2020 presidential bid was so cringe I couldn’t decide whether or not I should laugh or cry. Kanye has spent the past month harassing his ex-wife and children. Honestly, I am really starting to struggle with my decision to continue listening to his music. As someone who uses streaming platforms, I know that I am financially supporting the rapper each time his songs come on shuffle. No matter how small the contribution, it is my responsibility to decide whether that is aligned with my personal values.

The other day I initiated this conversation for the millionth time while walking home from class with a friend. After about fifteen Chicago blocks, we both realized that we could go back and forth on this debate forever, like a never-ending game of cancellation tennis. The query I’ve posed here is not a simple yes or no question. (It’s not even multiple choice.) Perhaps each individual person needs to determine what their values are, and then decide what they are personally comfortable with. I will say this: I still listen to Kanye, for now. I don’t listen to R. Kelly. I still watch Quentin Tarantino movies, but I don’t eat at Chick-fil-A. (That last one is easier for me, as a vegan).

I still read Harry Potter. I also jump at every opportunity I get to bring up J.K. Rowling and tear apart her opinions.

Jamisen Paustian (MAATC 2024) colors more than most adults, but she rarely stays inside the lines. @jamis3n