To Buy Or Not To Buy: On Book Consumption

There’s nothing like coming home with a new book. But where it comes from, and how it gets there, makes a big difference. 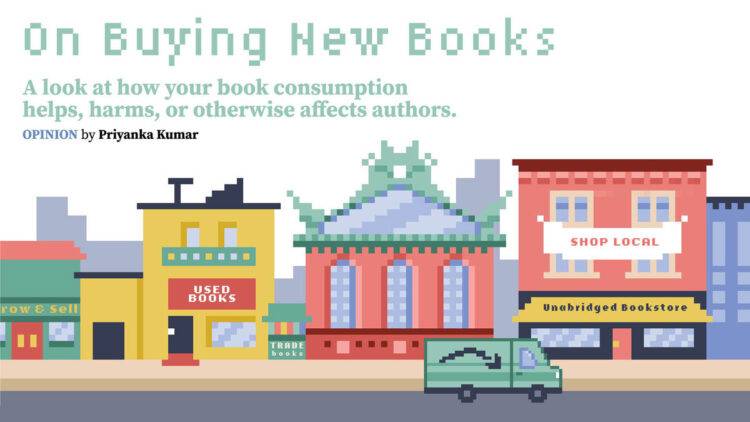 There’s nothing quite like the smell of a new book. That familiar scent of ink, paper and glue is so beloved, people have tried to recreate it in perfumes, candles, and air fresheners. There are few other serotonin boosts equal to that of buying a book you’re excited about.

Purchasing a book on a subject you’re interested in is an easy way to demonstrate your support for it, and to further educate yourself about a cause or topic you care about. It’s the best and most obvious way to support authors you care about. What slips through the cracks though, is that how you buy these books (and if you buy them rather than borrow them) does matter.

Until recently, and I admit this with due chagrin, I bought all my books from Amazon. And honestly, it’s because they made it so easy. Amazon has the lowest prices of books on the market — in fact, according to an early 2021 New York Times article, most independent bookstores can’t and don’t try to compete with them — and has its distribution process and reach down pat. The company has so many sellers in its online store, I’ve always found books in the three different languages I actively read in with no issues. My love-hate relationship with this necessary evil, as I call it, only changed when I actively decided to support a local independent bookstore that’s a ten-minute walk from my apartment, Unabridged Bookstore, which also has plus points for being one of the earliest queer friendly bookstores in Chicago. It dawned on me not only could I therefore help the store stay alive during the pandemic, but I also benefited authors and independent publishers I cared about more by buying my books there, for the simple reason of the difference in percentages that Amazon offers as a retailer compared to a bookstore. By the way, if you must buy your books from Amazon, pre-order them: Penguin Random House explains, pre-orders alert retailers and consumers to pay attention to a particular book and a large pre-order quantity can even cause retailers to increase their initial orders; since Amazon tends to send more data to publishers compared to its counterparts, and uses these to also designate its best-sellers which in turn can indicate a book’s popularity.

The pandemic saw a massive increase in the number of people reading — 2020 was the best year for print book sales in a decade. But it wasn’t just print books; e-books, and even audio books sales went up, the latter by 16.5 percent compared to 2019.  Equally importantly, it demonstrated the very real impact that current events have on what people read. Audiences flocked to books that related to previous pandemics, like John M. Barry’s “The Great Influenza.” With the rise of the BLM protests, concurrently, books like Ibram X. Kendi’s “How to Be an Antiracist” and “The New Jim Crow” by Michelle Alexander moved to the top of best-seller lists.

These lists are more important than people realise. An old, but still relevant article from the Stanford Graduate School of Business highlighted that when a title hit any best-seller list, sellers were more likely to push that book to the front of the store, and even slash its prices by as much as 40 percent. Best-seller lists hugely benefit unknown authors who have a chance for more people to hear about and buy their book. It is a status symbol, and proof that a book is being widely read.

Admittedly, social media has changed this game in a lot of ways. Where before traditional publishing made it so the kinds of stories that were told were often controlled by these market-based factors, social media has made it possible for authors themselves to prove the necessity and market for their story. Readers can connect with and find the authors they want to support more easily and help them provide a proof of concept: an eager audience for books and story-worlds that represent diverse cultures and mythos. A wonderful example of this is the newly released Iron Widow by Xiran Jay Zhao that debuted at number one on the New York Times Best Seller List.

That said, the highly undervalued library also provides an excellent (and free) source of reading material. Unsurprisingly, the pandemic also saw an increase in people’s engagement with their public libraries; while 99 percent of public libraries were physically closed, as with all other establishments, they adapted and found ways to move programming online. Some even became centers for testing and vaccination. Despite being such a central community hub, libraries still are majorly underfunded, and occasionally depend on philanthropy to help keep them running. It’s often increased engagement that does help them stay afloat, be that through increased visibility and proof of utility, or through money from paid events and the identification of potential donors.

Publishers and libraries don’t always get along. Publishers, worried that borrowing digitally from libraries hurts their own sales, limit how much access these institutions have to digital works. By limiting how libraries have access, and increasing the wait time to read a book, publishers hope that audiences will buy these e-books instead. It’s a battle that we as readers are pawns in without even realising it.

Convenience is everything today. In our constant search for it, it’s easy to forget these larger forces that impact the very social structures that hold our communities together. Bookstores and libraries are more than just places to find our next favorite read. They bring people together and allow connections that might have otherwise never existed. In truth, books are more than simply printed words on pages that are bound together — they are physical representations of a much larger social community and activity that both influence and are influenced by contemporary culture.

The other question worth thinking about is what to do with a book after you’ve read it. I personally have donated and have benefited immensely from the pay it forward libraries that people set up in their yards. You can also donate books to school libraries so that the books can continue to have a life even if not necessarily in our home. Some folks also sell their copies, becoming a part of the used book market. The used book market doesn’t usually result in any royalties for the author, or money to the publisher. However, with new ventures like AuthorSHARE, a UK based scheme that is set up to let authors get royalties from second-hand sales as well, it’s apparent that the publishing eco-system is evolving (voluntarily or otherwise) with buyer behaviour.

It’s worth considering that our own book habits are due perhaps a tad more care and intention, especially since a single book doesn’t just impact you, it affects an entire invisible chain of people who are the reason that book is even sitting in your hands in the first place.

Priyanka Kumar (MANAJ 2022) is a writer, artist, avid reader, and travel enthusiast from Bangalore, India. She is, amongst her other identities, a proud member of the BTS ARMY.

Literature To Buy Or Not To Buy: On Book Consumption
« Previous Story