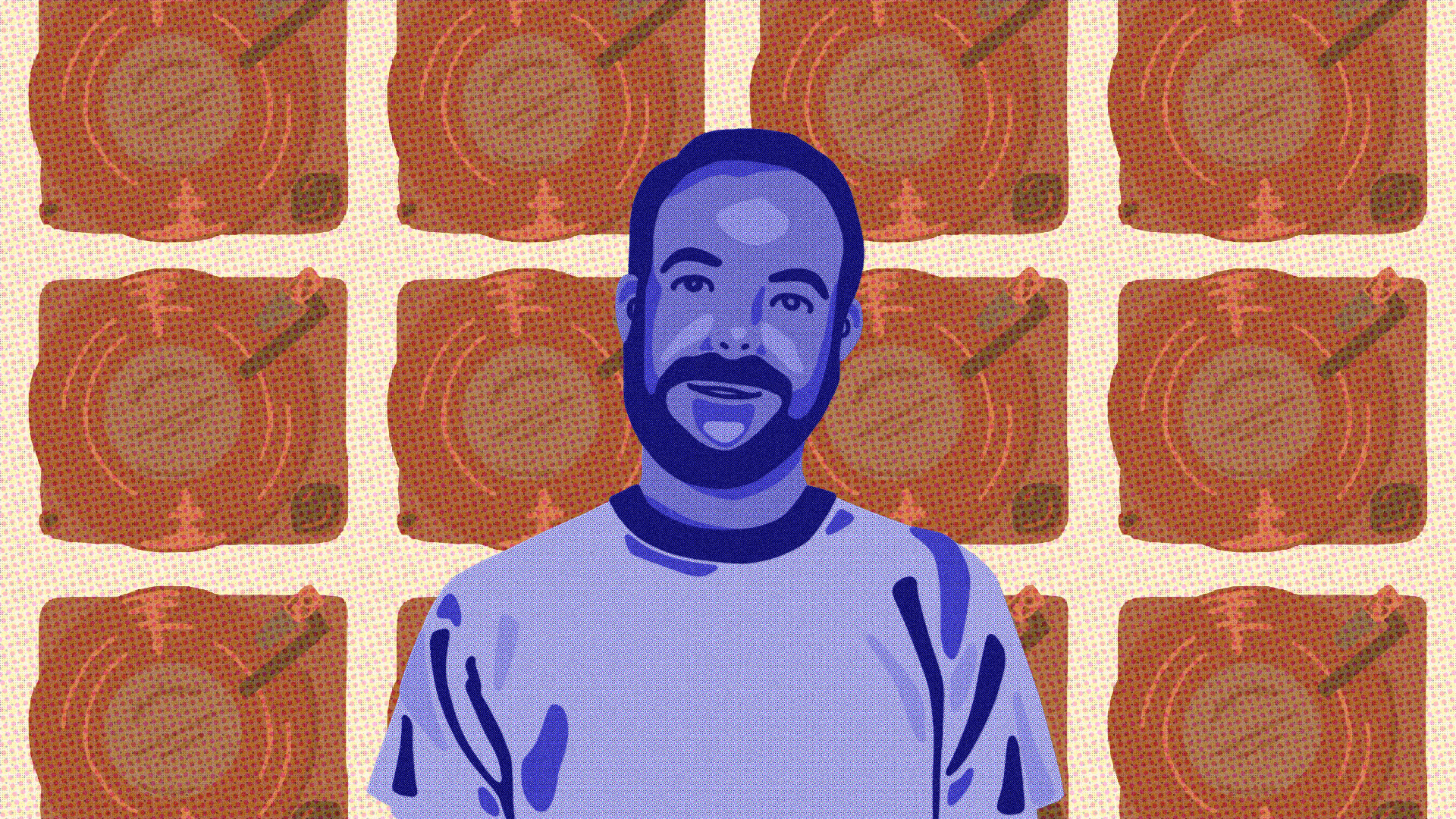 Ethan Persoff (BFA 1997) can confidently illustrate a couch, but with sound he can “absolutely draw a couch down to the fiber,” he tells me over Zoom one day. When Persoff attended SAIC in the nineties, the sound department had “a zero-music rule:” If you made a beat, “you were thrown out.” In a memorable aside, Bob Snyder (faculty emeritus) said to Persoff, “when you have a studio…” When, not if. During the retelling, Persoff swiveled his webcam around to show me the stacks of electronic equipment that now constitute his studio in Austin, TX. The eclectic audio project, “Spoken Word with Electronics,” is Persoff’s main work these days, and its origins as a comic called “The Recovery of Charlie Pickle” speak to his manifold practice.

Persoff appreciated his education at SAIC for the way “your focus can change in a completely undeclared way.” He was in between picking colleges when he received a copy of F Newsmagazine from the admissions department. “There was a drawing in there of an editor on the toilet.” Persoff recalls that this persuasive image was, “very wonderfully” drawn by Scott Marshall (BFA 1994), a painter with whom Persoff developed a long-lasting and fruitful collaboration. According to Marshall, their projects include “a short psychedelic animated video that screened at the Cannes Film Festival in France” and “an X-rated political satire in the form of a 1920s ‘Tijuana Bible.’” The two also created a free, DIY Halloween mask of disgraced GOP Senator Larry Craig, which has over 30,000 direct downloads from Persoff’s website, ep.tc.

ep.tc, has been around since the pioneering days of the internet. Started in 1996, ep.tc lays claim to some of the earliest web traffic. Pranksterism permeates Persoff’s work, including the website itself;  the HTML source is a joke that would cause “a coronary” for any software developer. Today ep.tc is stubbornly exterior to big platforms. “When you have your own website,” Persoff said, “it’s kind of like a popup gallery.” The 1990s aesthetic of ep.tc belies its engagement in timeless ideas: the foolishness of being too serious.

One of Persoff’s early successes is “Comics with Problems,” an archive of materials that demonstrate its title. The archive is composed of works like public service handouts and U.S. military pamphlets, that clunkily attempt to educate via comics. In one, Eddie the Eagle swoops into an attic of multicultural (read: tokenized) children who are on the verge of finding grandma’s gun. “STOP! DON’T TOUCH!” the eagle yells. Go find grandma, who is available only if the children fall through a hole in the floor. (Don’t worry, a pile of pillows will catch them.) At least two Ph.D. dissertations have used “Comics with Problems” in their research.

“Comics With Problems” led to another archive project, Paul Krassner’s counterculture satire magazine, the Realist. Krassner only kept thirty issues, so Persoff hunted down the remaining 110 issues, give or take. Printed in the 1950s and 60s, the Realist contained essays that never gave away whether they were factual or not. Putting up the Realist had some “real bad, unforeseen, and comical consequences.” For instance, a notorious fan of the Realist was the alt-right news outlet Breitbart which, Persoff mused, “liked the way [the Realist] lied.” On the cover of the Realist’s last issue, a quaint, Americana scene of opium smokers and children surprised me by it’s signature: Norman Rockwell. Maybe I should be more discerning; Rockwell didn’t draw that.

Through Krassner, Persoff became connected to John Wilcock, a writer for the Realist. This proximity spawned another project, “John Wilcock: The New York Years.” Created in collaboration with Scott Marshall. The kickstarter describes the project as “an extensively researched comic book documentary on the 1960s Underground Press!” The book came out in complete series earlier this year, and has been featured in Houghton Mifflin’s “Best American Comics” and praised by the Washington Post for its erudite insight into the underground press of a bygone era.

For twenty years, Persoff has worked as a software developer at the University of Texas library. “A library, if it’s done well, it’s its own university,” Persoff said. “Instead of professors, there are subject librarians.” Persoff exemplifies the practice of eclectic and thorough research.

Though research and the archiving proved to be useful, Persoff was never sure if he was just avoiding drawing or writing. Radio Wire (2013-ongoing) is a comic about a shitty relationship. The images are photographs that have been digitally tweaked to capture the turmoil of bruising emotions. This work, Persoff observed, came out of the earlier comics, Teddy and The Recovery of Charlie Pickle. “If you’re really making work that is of value to yourself, honest to yourself….” Persoff says, “There’s a good chance you’re telling one story your whole life.”