MacKenna Hanson uncovers the mystery as to why a fictional robot-puppet who tries to sell you ‘pipis’ took over the collective minds of internet artists. 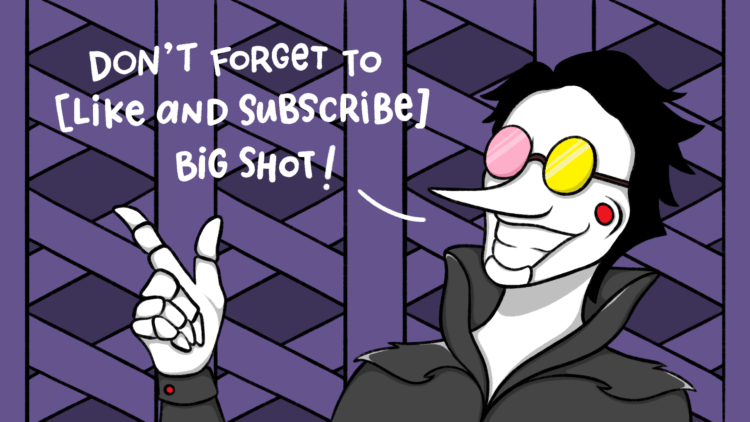 Imagine this — you just woke up from a long night of homework, and you’re leaning over your phone, eyes blinking away crusty sleep. You open up Twitter, expecting to see more content about the apocalypse and celebrities in hot water. Instead, you are bombarded with something even more bizarre and confusing — drawing upon drawing of a mulleted, smiling man with brightly colored glasses. You blink and shake your head, scrolling further to try and escape this weird rabbit hole.

But you can’t. You can never escape. The drawings keep on coming, dozens and dozens of them.

That was my experience a few weeks ago. Eventually, through the diligent and exhaustive work of a quick Google, I discovered that this man everyone was drawing was, in fact, a character named Spamton G. Spamton from a video game released on September 17th called “Deltarune: Chapter 2.” Spamton apparently lives in a dumpster and wants to be a ‘big shot’. This information did not clear anything up for me whatsoever, so I continued to trowel through the depths of the Internet for answers.

“Deltarune,” as a franchise (it has two games; “Chapter 1” and “Chapter 2”), is a pixelated RPG (role-playing game). You play as a character named Kris, and go on various adventures. “Deltarune” was developed by a man named Toby Fox, and is a sort-of sequel to a famous video game Fox developed as well that you’ve probably heard of — “Undertale,” which was released all the way back in 2015.

This cleared things up a bit for me. Spamton didn’t come out of nowhere — he was a character in the most recently released game of a popular video game franchise. But that still didn’t explain everyone’s inexplicable obsession with him.

After doing some more research, I learned that Spamton was a boss in “Deltarune Ch. 2;” he can either be a miniboss or a final boss, depending on the path you take. He manifests in the ‘Trash Zone’, and runs an in-game store where you can buy supplies for Kris. He speaks in a strange and disturbing syntax — for example:

If that phrase means nothing to you, don’t worry. It didn’t mean anything to me either. All it did was make me feel frazzled. Needless to say, I was shocked, confused, and slightly terrified as to why artists were so enamored with him. Spamton was a villain, and a strange one at that. What was so compelling about a character who lived in a dumpster, had a mullet, and tried to sell you ‘pipis’? And why were so many people drawing him?

I had to ask people who knew. In this vein, I interviewed Hayley Schaeffer (@Creaturologie on Twitter), and Collin (@colliholly on Twitter). Both are accomplished artists who’ve drawn Spamton, as well as many other brilliant subjects. They were kind enough to answer my questions about why, exactly, this eccentric character is so alluring to the artistic mind. Below are our interviews (lightly edited for clarity).

Why did you first start to play “Deltarune Ch. 2?”

Schaeffer: I’ve been a big fan of Toby Fox’s earlier game, “Undertale” —so I’ve been following “Deltarune” closely whenever new material is released! I dropped everything to play “Deltarune Ch. 2” all in one night.

Collin: I played “Deltarune: Chapter 2” because I played the first one and enjoyed it! While I was excited for the game myself, there was also admittedly some pressure from the art community to play it ASAP. I knew there would be a tidal wave of spoilers on social media after less than a day, so I wanted to play it quickly to avoid spoiling myself for anything.

When you were first exposed to “Undertale” and ”Deltarune” media, what did you think of the pixelated art style?

Schaeffer: The style reminded me a lot of old RPGs that I used to play as a kid. It has a very nostalgic quality to it that drew me in!

Collin: I don’t think I had much of an opinion on the pixel art style at first, admittedly! I could tell they were going for that simple pixel look reminiscent of other similar RPGs (“Earthbound,” “Yume Nikki,” “Lisa,” etc.), and that’s about it. I didn’t really feel particularly strongly about it in any sort of way, other than ‘sure, it works.’

Do you like the pixelated style? Why or why not?

Schaeffer: I think the art style is wonderful! It’s incredibly charming, and really dynamic despite being so simple. It allows for more humorous cartoon-y moments, but doesn’t take away from the game’s more dramatic and scary elements either. Also, I think its simplicity and abstract quality leaves a lot of room for people to interpret characters in vastly different ways, which is always super interesting to me.

Collin: I think I’ve actually found I’ve appreciated the pixel art style more over time. It’s grown on me, and I think the simplicity actually adds a lot to why the characters are fun to draw. Because their features are so small and vague, with their sprites generally only being a few pixels tall, it leaves a lot of room for interpretation from artists. Every artist has their own unique take on drawing the “Deltarune” and “Undertale” characters, and I think that’s part of the fun.

Artistically speaking, what is appealing about the character Spamton in particular?

Schaeffer: Spamton has a simple, almost ‘chibi’-like appearance in his overworld sprite — with a large head and smaller body/legs, which gives him a lot of appeal just in his proportions alone. He has a simple, high-contrast color palette of black and white, with a few accent colors (like on his glasses) that pop out! Of course, on top of that his design plays on familiar creepy tropes that audiences tend to enjoy, such as appearing like a marionette puppet, having a big smile, a vague suit/V-neck sort of attire, and having a long pointed nose. He looks like if the Snow Miser and Billy the Puppet had an off-puttingly adorable baby, and it just sorta works.

Collin: This is something I’ve thought about a lot myself, honestly. I’m embarrassed to say Spamton single handedly brought me out of a several month-long drawing funk —I  went from barely being able to get myself finishing one or two art pieces monthly to about one a day. I think there’s several reasons for this, with the first being that he’s honestly just downright cute. Extremely unconventionally cute, but cute. There’s also quite a bit of backstory to Spamton, but a massive amount of it is left up to speculation. It gives artists a lot to work with and interpret themselves. He’s also just a funny, chaotic little dude who’s ripe for memeing, so there’s that, too. With all that thrown together into a single character, I’m not surprised he quickly became a fan favorite.

Are there any other characters from this game you like to draw?

Schaeffer: Other than Spamton (who, because of his off-putting nature, is incredibly fun to draw), I have drawn other “Deltarune” characters such as Susie, Lancer, and his big scary father King Spade.

Why do you think so many artists like the “Undertale” and “Deltarune” games?

Schaeffer: All the designs in “Deltarune” are so unique and diverse, and it’s a really fun challenge for artists to interpret them in their own styles and personal visions. This game in particular is very visual in its storytelling and combat, so it especially appeals to artists who are interested in telling their own stories. Toby Fox’s work really is such a groundbreaking inspiration for many, including myself!

Collin: I think the combination of interesting and appealing character designs, a massive amount of story lore that leaves a lot up to speculation, and frankly very funny and well-written characters forms the recipe for why it’s such a popular game among artists.

Both Collin and Schaeffer’s opinions helped me to understand why Spamton became (and is currently) such a phenomenon amongst artists. He’s bright, creepy, fun, and endlessly interpretable. Of course he’d appeal to a group of people who enjoyed visually creating and re-creating things on a professional and personal level. And of course, after all of this effort and research, I had to give drawing Spamton a shot myself.

All I have to say is, if you haven’t drawn him yet, pick up that pencil and go for it. You won’t regret it.

Entertainment, Featured Why Is Everyone Trash For The “Deltarune” Trash Man?
« Previous Story

One Response to Why Is Everyone Trash For The “Deltarune” Trash Man?