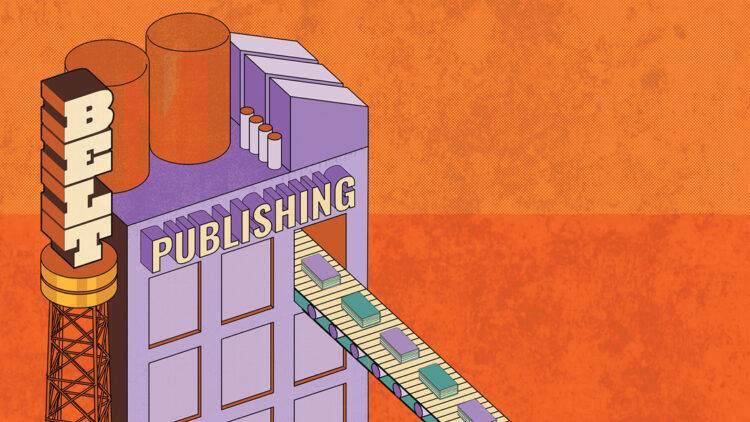 Face to face with the publishing world, independent presses within the United States find themselves at odds with a deeply rooted, exclusionary written tradition. Publishingʼs highly centralized nature leaves most people thinking about the press concerning one place: New York City. The issue is that a concentrated “curated” voice fuels the erasure of thousands of perspectives, the muffling of voices dismissed as unrefined.

Over the past eight years, Cleveland-based Belt Publishing has been working to infiltrate the established publishing world to disrupt what it considers “sophisticated” writing. Following an initial attempt to collect stories from the Rust Belt, Anne Trubek decided that it was time for the Rust Belt to find its voice and broadcast it. Trubek set out with one central mission: to provide a space for the forgotten or belittled midwestern voices to carve their place in the press, regardless of its continuous dismissal.

Independent presses confront an untold amount of obstacles ranging from financial struggles to fighting for readers in a saturated market. Belt Publishing serves as a beacon for dismissed Midwestern voices, wearing its regional badge with a pride thatʼs fully unadulterated. The press upholds its original mission to illustrate nuances of the Midwest, giving readers (especially from the region) a chance to be heard in an otherwise restrictive writing world.

“[In the publishing world] the phrase regional press has a negative connotation, between something that is only interesting for those people in that region or that they tend to be not as sophisticated works,” Trubek said. “That is a lot of the way people think about it, which is, of course, not how we think about it. It is not the truth or the reality of what we do or who reads our books.”

Trubek felt inspired to launch Belt Publishing (initially as Belt Magazine, which has since separated as another organization) when she realized that the publishing world lacked something genuine, vulnerable, and deeply gritty about the cities and towns scattered across the Rust Belt. Voices that continuously go overlooked by the New York publishing world oft en struggle to reach a nationwide audience, perpetuating myths and stereotypes caused by lack of exposure.

“People oft en use the phrase New York to refer to publishing as if they are synonyms, so itʼs just hard to not be in New York,” Trubek said. “But, we take publishing as seriously as New York presses.”

Trubek believes that Belt Publishingʼs existence is enough resistance to the overwhelming and often suffocating New York publishing world. The Midwestern press only publishes collections or works that are approximately 60,000 words or less, which is significantly less than the minimum for many major presses. Belt oft en chooses to publish books on topics that would typically be considered extremely specific. The beauty of Belt is highlighted by its nuanced subjects that most big presses would ignore or that many writers would struggle to solidify contracts for.

Belt Publishing predominantly works as a space for non-fiction or essay writers that present the raw aesthetic and incorporated landscapes that define the Midwest. Several books or collections center themselves around the Rust Belt cities like Cleveland, Pittsburgh, Buffalo, Detroit, and others that often get overlooked. Non-fiction titles such as “How to Speak Midwestern,” “An Alternative History of Pittsburgh,” and “Rust Belt Chicago” provide insightful details to low-exposure vignettes of the Rust Beltʼs rich history.

In recent years, the company has expanded its portfolio and begun considering other genres. They announced a novel release next year, the first time that the press will venture into fiction. Before this, Belt released a multi-medium book of poetry and photography, “El Dorado Freddyʼs” by Danny Caine and Tara Wray, that framed the Midwest at its candid yet beautiful core. “El Dorado Freddyʼs” attempts to capture exactly what Belt Publishing desires to share: unfiltered, nuanced insights into a very real American experience, rather than the increasingly disparaging popular perception presented in mainstream media. Caine uses the exploration of the Midwestern landscape through fast food as a frame to redirect stereotypes against themselves.

“What little media representation there is of Cleveland, especially when growing up, is frequently punching down on Cleveland and the region from the outside,” Caine says. “From ʻMajor Leagueʼ portraying this hapless Cleveland Indians baseball team or that one episode of ʻ30 Rockʼ where they have a million jokes about moving to Cleveland. But then, of course, you love it and you take great pride in where you are from. It turns into this [personal] defense. Then this defensiveness turns into this desire that if no one is going to tell nuanced, compelling, interesting stories about my region, I am going to do it. I am going to gravitate towards the people who do. Thatʼs one of the reasons I am so glad that Belt is here because they are telling the stories of the region in a way that is desperately needed.”

Caine doesnʼt believe Belt needs to broaden its regional voice, and he adopts a similar ethos with his bookstore, called Raven, in Lawrence, Kansas. The two companies exist to illuminate the stories of the Rust Belt which for decades have been severed from the spotlight. The middle American experience is often seen as not glamorous, but these two independently owned businesses are making sure this writing does not go by the wayside.

“There isnʼt another press doing what we are doing. So we have this free play that we can do what we are doing,” Trubek said. “That we do what we do is very important to a lot of people who feel like their experiences and their place are being written about, that hadn’t been so much previously, or even been taken seriously. It has emotional and intellectual importance to a lot of readers.”