Keeping art supplies out of the landfill and in the hands of students and teachers. 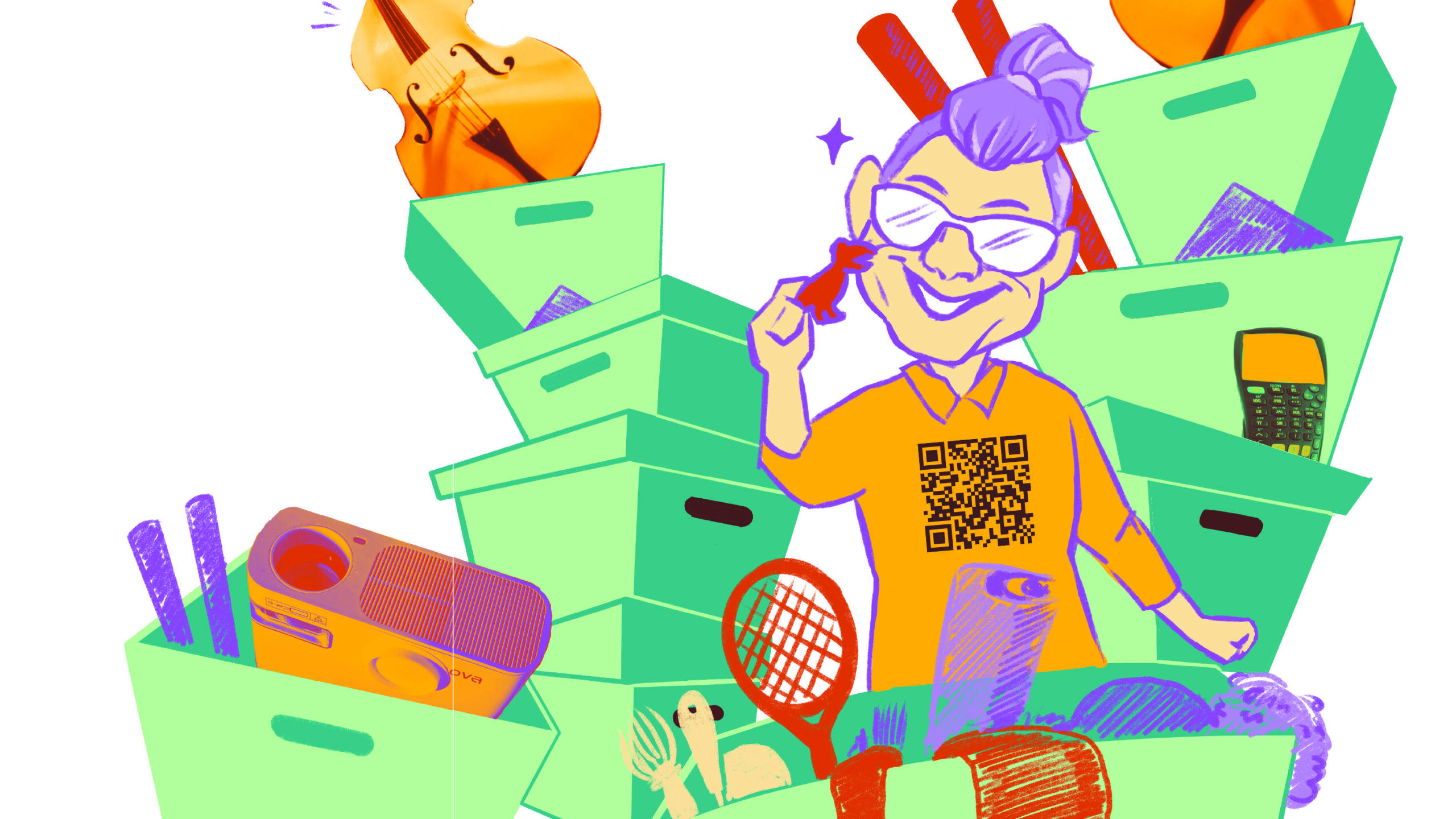 For six weeks in 1987, an oozing barge laden with over six million pounds of garbage floated just beyond the ports of eastern American cities. The now-infamous Mobro 4000 trash barge unsuccessfully sought a landfill to unload its sun-lashed and stinking trash, triggering a turn in the national conversation toward wasteful consumption. Greenpeace pinned a banner to the barge that stated in four-foot letters: Next Time Try Recycling.

The mantra “Reduce, Reuse, Recycle” is meant to be interpreted in order from most to least important. But Karen Weigert, executive vice president of the energy innovation nonprofit Slipstream, and the sustainability contributor to WBEZ’s Reset, thinks something is missing. Weigert wants to add “refuse” to the beginning of the mantra. Refuse to use a new cup everyday, refuse to buy the latest fashionable shirt. Refuse to let a ballpoint slip into the realm of disposable. According to the BBC, more than 1.6 million ballpoint pens are thrown out every year.

On a recent Saturday morning, I opened a file cabinet drawer at the Creative Chicago Reuse Exchange (CCRX) that contained at least a thousand ballpoint pens. In one section of the warehouse, neat cards are printed with labels like Post-Its, Binder Clips, Drafting Supplies, and thirty other categories of office supplies. Other sections of the warehouse are dedicated to papers, hardware, fabric, science equipment, teaching aids, books, and numerous other categories for an office, classroom, or studio.

“Trash is just a failure of imagination” goes the motto of the nonprofit. Throughout the year, CCRX opens its doors to hundreds of public school teachers expected to spend out-of-pocket money to stock their classrooms. With nearly twenty-two thousand public school teachers in Chicago, Barbara Koenen, executive director and founder of CCRX, points out that their current reach is “drop in the bucket.”

As Koenen walked me around the warehouse, she picked up misshelved items and tucked them under her arms. Koenen, motivated to keep good supplies out of landfills, began CCRX in 2017 with a series of pop ups around the city. During a pop-up on the south side in 2019, Koenen repeatedly heard gratitude expressed by teachers for having supplies on this side of the city. She decided this is where she wanted a permanent location.

Located in the Auburn Gresham neighborhood, CCRX shares space with Envision Unlimited, a nonprofit that works with differently-abled adults. Volunteers from Envision Unlimited work alongside the public to sort donations and deconstruct items into scrap metal from Wednesday to Saturday, while teachers arrive by appointment to procure supplies. Every couple of months, CCRX holds public community programming including creativity workshops and repair days with groups like Community Glue and the Chicago Tool Library.

As a volunteer, I was responsible for ferrying boxes of donations to their specific home. I shelved clipboards, test tubes, camera equipment, and postcards while staunchly avoiding a bin of donations labeled “Art Supplies.” A quick glimpse flagged the contents as a nightmare of miscellanea, an assortment of objects that might accumulate in a junk drawer over years. Eventually, it stood as the only bin remaining, so I hauled it out. Koenen, in a lime green smock that complimented her mismatched earrings and grey, spunky undercut, cheerily gave me leeway to reorganize the art supplies shelf as necessary. I was stumped by the utility of donations like pop bottle caps, while I marveled at the quality of others: Prismacolor colored pencils, Golden paints, and all the paper I could want in a lifetime of comics creation. Tracey, a longtime volunteer, assured me that she sees a lot of turnover in materials from month to month.

The front desk consisted of a clique of mismatched tables encircling an anatomical skeleton, a computer, and Luan Joy Sherman, the staff on duty that morning. Sherman graduated from SAIC with MFA in sculpture in 2020. Given the volume and variety of objects in the warehouse, this job renewed his appreciation for letting go of control. Sherman demonstrates the delight artists feel while roaming about CCRX in search of raw materials.

After a shift, volunteers are invited to fill a box to take with them. When I asked Sherman about any spare paper guillotines, he brought me to the “imagination journals” craft area. He pulled out a sturdy paper guillotine for me to take home as my reward for interrupting the pipeline of waste.

Plastics recycling was a sham from the start. The green movement of the 1970s established glass, metal, and paper recycling throughout American municipalities. After the Mobro 4000 incident, plastics came under increasing public scrutiny. To redirect unflattering attention paid to plastic-clogged landfills, the Plastics Industry Association lobbyist group (PLASTICS) put together a persuasive ad campaign that we recognize today as the stamp found on most plastic items: the international recycling symbol and a number.

As early as 1974, PLASTICS circulated confidential internal documents that stated things like, “Recycling plastic is nearly impossible…There is no recovery from obsolete products…” and “Plastic degrades every time you try to reuse it.” Laura Sullivan of NPR in combination with PBS Frontline reported on this canonical example of misinformation foisted onto policy-makers by lobbyist groups. This early instance of Greenwashing has left the public with the promise of recycling even as oceans and arable land are asphyxiated by plastics.

PLASTICS, in defense of plastics, point out that “plastics have made the modern economy possible.” On its website, PLASTICS has a tab dedicated to environmental considerations. They state that “We understand what’s important to our members’ businesses and advocate on their behalf to… create sustainable business growth for the industry.” The sustainability PLASTICS seeks is that of business. Never mind that plastics threaten to collapse food chains, emit greenhouse gases, and produce adverse health effects for residents of production towns.

The dystopia we inhabit propels us along as unthinking consumers. Awash in cognitive dissonance, we fail to simultaneously understand the connection between economic advantage and environmental damage produced by our consumptive lifestyles. In addition to Refuse, tack Rethink onto the mantra. “Rethink and Refuse” the materials that the earth cannot digest, lest, broken by this plastic burden, Earth loses its life.