Employees at the Art Institute are asking senior leadership to cease their anti-union tactics. 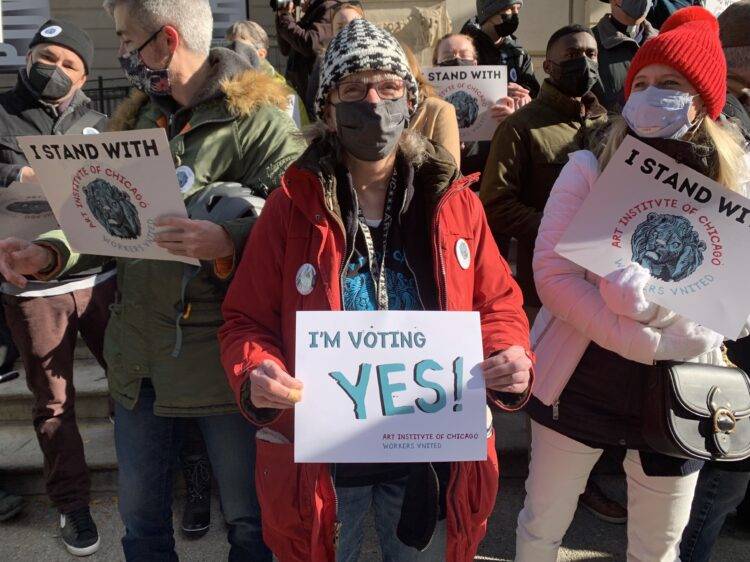 Cheryl Arvio works in the library at the Art Institute of Chicago. Photo by Parker Yamasaki.

On Monday, US Representatives Jan Schakowsky and Sean Casten, Cook County Board President Toni Preckwinkle, and dozens of local officials and community leaders gathered on the steps of the Art Institute of Chicago to call for a fair union election.

On November 2, the Art Institute of Chicago Workers United (AICWU) filed a representation petition with the National Labor Relations Board in Chicago, moving their unionization efforts into the election stage. Despite demonstrable majority support for the union, neither the Art Institute nor the School for the Art Institute chose to voluntarily recognize the union. Employees at both institutes say that management has repeatedly interfered with their efforts to unionize. At Monday’s gathering the group urged management to cease their anti-union tactics and adopt “true neutrality.”

The conference commenced with remarks by SAIC alumni: Catie Rutledge, philanthropy coordinator at AIC, and Eala O’Se, material source manager at SAIC. They reiterated the union’s demands, leaning into protection against layoffs, and noting the high turnover rate at the school, especially among workers of color. They called out management for “creating doubt through emails and ‘informational meetings,’” citing claims made by management about who would or would not be eligible for the union. 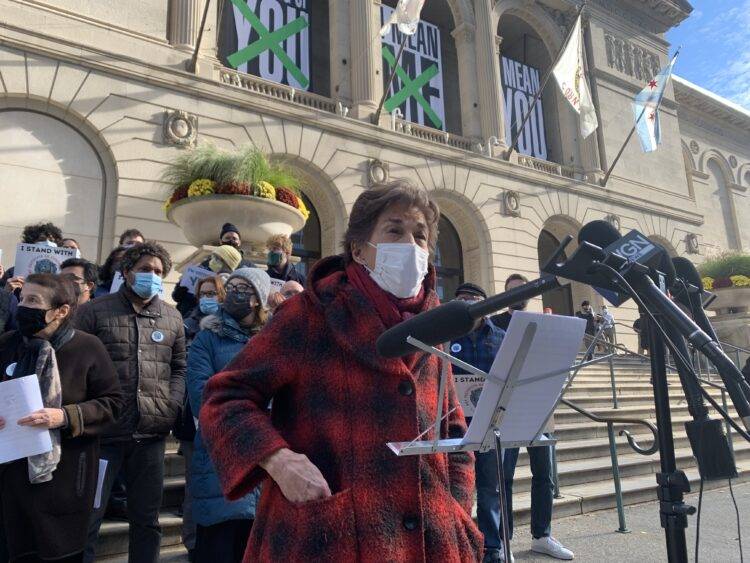 Congresswoman Jan Schakowsky: “We ask that the workers get their demands, and that the management decide that they are going to work together to have decent working conditions and wages.” Photo by Parker Yamasaki.

US Representative Jan Schakowsky introduced herself next “as a member of Congress [and] as a proud labor union member [herself].” Her speech was interrupted by a man walking down Michigan Avenue, shouting “Let’s Go, Brandon!” and taking advantage of the captive audience he’d found to yell, “TRUMP! TRUMP! TRUMP! TRUMP! TRUMP!” in Congresswoman Schakowsky’s face.

“Who are you?” Tracy Abman, executive director of AFSCME Council 31, shouted from the sideline. “AIC-WU,” the crowd shouted back. The call-and-response continued to drown out the man’s yells until he became disinterested and left the scene.

U.S. Representative Sean Casten seized the opportunity to talk about the divisions that the country is facing right now, working the shouting man’s display into his own message of the need for solidarity.

“What we just saw … so many people in our country are saying that the path forward is to divide us, to focus on all the things that keep us separate,” Rep. Casten said, “and we know that’s not the way through, right? We know that everything we are proud about in our country is because people got together and they organized to be part of something larger.”

Casten went on to quote French historian Alexis de Tocqueville’s observations on democracy in America. “All citizens are independent and weak, they can achieve almost nothing by themselves, and none of them can force his fellows to help him. Therefore they sink into a state of impotence if they cannot learn to help each other voluntarily,” Casten recited. “What we just saw walking down this street was that state of impotence. Show that guy some love, show him some empathy, he feels powerless.” 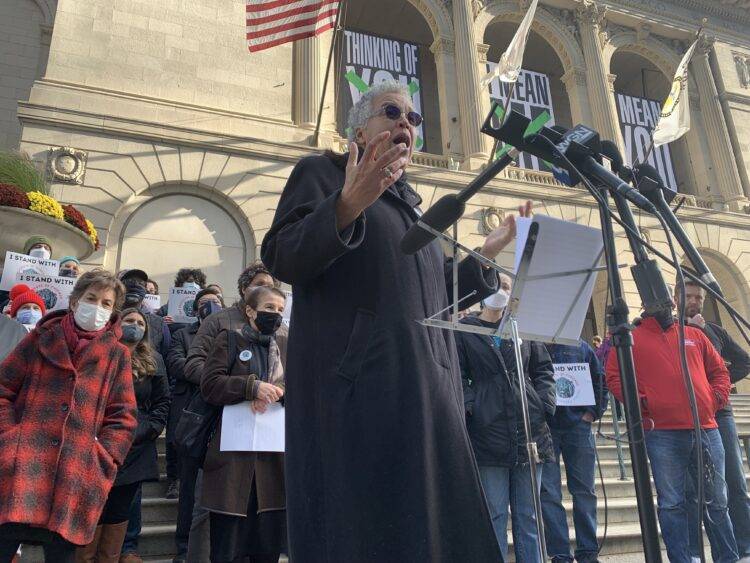 Cook County Board President Toni Preckwinkle thanks labor unions for the benefits that modern workers enjoy. Photo by Parker Yamasaki.

The conference continued with speeches from Cook County Board President Toni Preckwinkle who celebrated the 8-hour workday and 40-hour workweek as union achievements, and AFSCME Council 31 executive director Roberta Lynch who spoke to the crowd about the “tired, old, familiar, union-busting tactic” of making the union into an outside entity.

“They’re trying to make it seem like there’s … some big bad union boss,” Lynch said, “that’d be me.” The crowd laughed as the woman, whose head barely crested the podium’s microphones, pointed at herself. Then Lynch dove into second-person. “YOU are the union,” she said, turning her back to the press and pointing at the crowd behind her, “this is YOUR election.”

“We love this place,” Lynch continued. “We’re not acting out of anger … we don’t necessarily want to fight, but we’ll fight if we have to.” At that cue, someone in the crowd shouted, “When we fight!” To which the crowd shouted back, “We win!” 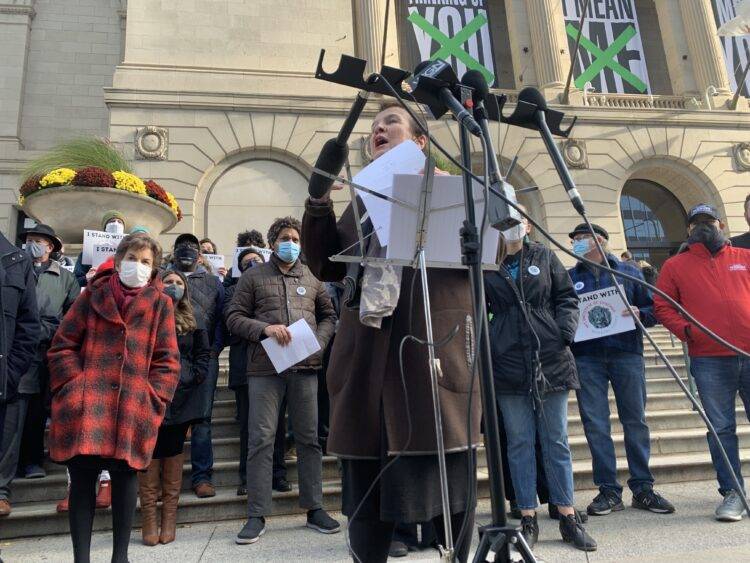 Katie Bourgeois, a mailroom tech and facilities coordinator at SAIC, and Robert Burnier, a specialist in painting and sculpture at AIC, rounded out the speaker lineup by showing their disappointment with the management behavior at their respective institutions. “It’s insulting, it’s upsetting … ” said Bourgeois, “the decision for this election has already been made by the majorities of our coworkers who signed union authorization cards. Management should have simply respected our decision and recognized our union, but they refused to do so.” Burnier followed: “This shouldn’t be a battle, it can be a collaboration.”

Anders Lindall, spokesman for AFSCME Council 31 and MC of the press conference, closed by calling on AIC’s and SAIC’s administration to commit to five principals “for true neutrality and for a free and fair election”: true neutrality; no intimidation; museum and school resources should be spent on the museum and school mission; non-disparagement; and ‘equal access, equal time,’ meaning that if management has meetings on institutional property regarding the union, that union representatives should be granted equal access and time. 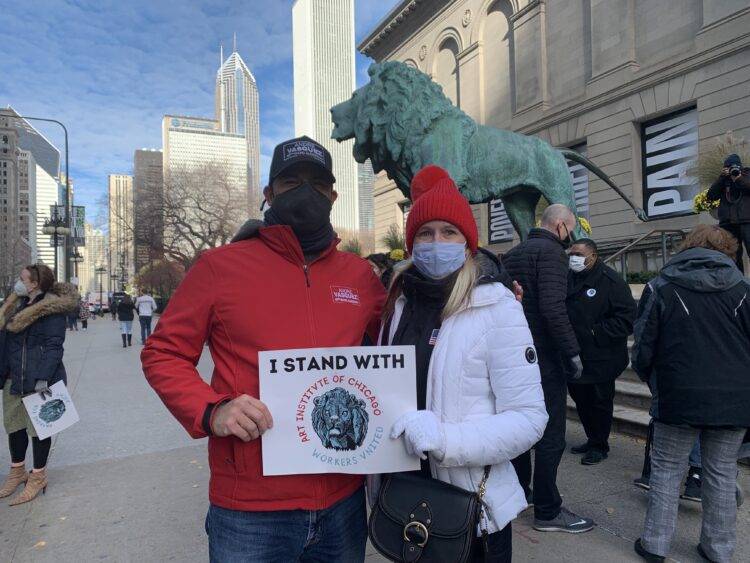 Alderman Andre Vasquez of the 40th ward and Cook County Board Commissioner Bridget Degnen pose together at the end of the press conference. Photo by Parker Yamasaki.

Edit: Headline has been revised.