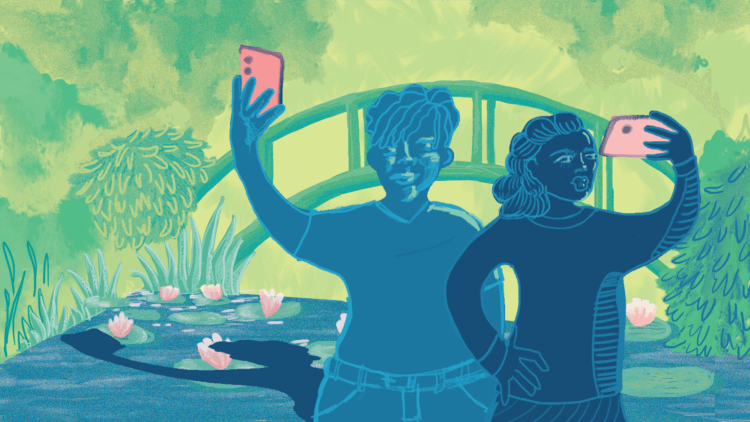 If you missed the Immersive Van Gogh Exhibit Chicago, do not feel regretful, because Impressionist painter Claude Monet is next! “Claude Monet: The Immersive Experience” will take place in Chicago soon (dates to be announced). The Monet show intends to absorb its audience in a poorly-lit room full of immense projections of the artist’s colorful landscape paintings. The producers even placed a well-decorated Japanese bridge in the tour exhibition in Brussels to emphasize the Monet theme.

Despite similar titles, the shows are produced by two different companies who take advantage of the indispensable word “immersive.” For me, everything could be described as “immersive” if one feels attracted by the object and concentrates on it for some time. Mark Wigley, former Dean of Columbia University’s Graduate School of Architecture, Planning and Preservation, discusses art and space in an essay in 2016, “sometimes, in what are bad examples of exhibitions labeled as immersive, immersiveness has become a kind of visual image, representing immersion without being immersive or multi-sensory.” These shows reproducing master’s works are unpleasant to me because they are not only moneygrabs but visual parodies of the originals.

The dim room of black curtains and covert projectors could be an intriguing place for open-minded art lovers, young couples, and families to visit on weekends. Paintings come alive on walls, ceilings, and ground. Audiences can wander around and take pictures freely without the fear of being inappropriate in a traditional museum setting. Yet the more time I spend in front of those projection screens, the more I feel lonely and detached from the artificial scenery. When I stare at an impressionist painting, I am looking into their corner of the world through a stylized “filter” made by the artist. I enjoy the artist’s creativity while understanding that the real world extends beyond the canvas. I do not want to be trapped in a fabricated space that takes that perspective for granted!

Just as Walter Benjamin, the German cultural critic, argued in his analysis of films, ”The audience’s identification with the actor is really an identification with the camera.” The audiences of Monet’s (or Van Gogh’s) show look through a camera view predetermined by the producers who hide behind the stance of letting visitors “better understand impressionism.” With the actual work I can contemplate it while keeping a distance, yet in the immersive show I must focus on the animated scene. It is hard for me to reflect on any individual work because all I can do is chase the moving images during a limited time span and get distracted by animation and montages. The digital environment creates a blast of visual effects, but what is left?

The immersive shows are entertainment businesses rather than educational programs, let alone innovative art creations. Critic Clement Greenberg viewed Kitsch as the works which “predigest art for the spectator and spare him effort, provide him with a short cut to the pleasure of art that detours what is necessarily difficult in genuine art.” Avant-garde presents “cause” while Kitsch only imitates “effect.” The real Monet broke the tradition of art technique and liberated artists from the obsession of reproducing lifelike scenery, while the digital works lure the public to settle in an eternal illusion with the resistance of change. The immersive show digests his work into simplified spectacle.

Why should we enter the immersive show? The show does not provide enough time and space to enjoy the real works compared to a museum. It shows less respect to the original contents than reproductions on the internet. It explains less about the artist’s life and creative practices than a biopic. It includes fewer well-designed facilities than an amusement center. Maybe it will eventually turn into a studio where people could take selfies to fulfill narcissistic needs. The business groups apparently will not stop — the next may be Gustav Klimt, Salvador Dali, or even Piet Mondrian. As individual consumers we can count the cash in our wallet to decide whether to make the deal. Nevertheless, genuine art lies in the liberation of ideas to confront the world, rather than the rigid presentation of style and obsession of escaping from reality.

Yunyao Que (MA 2023) lingers among art, tech, and reality. She constantly visits the white cliffs near Brighton in her dreams.

In Los Angeles, A Museum Union At Work

Thinking of You, I Mean Me, I Mean Barbara...