The labor battles in 19th Century Chicago paved the way for the workplace as we know it. 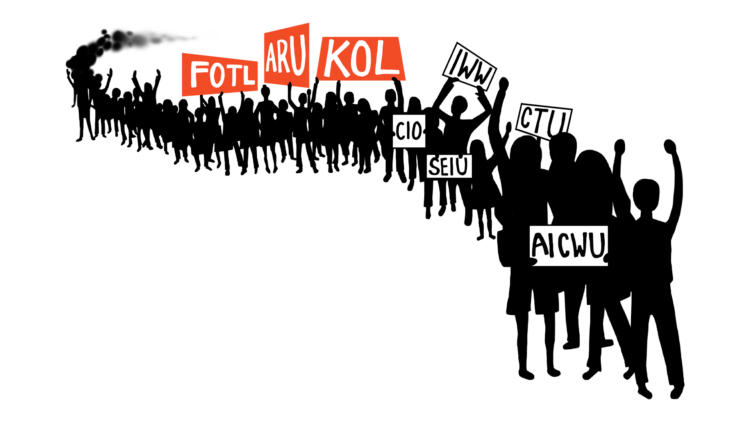 Historically, some of the most consequential labor battles occurred here in Chicago during the 19th century, resulting in May Day, Labor Day, and the eight-hour workday. These advances mark a
rich and complicated labor history haunted by racial and gender inequality, anti-union efforts, and anti-communist rhetoric. Still it is these battles that make the present possible.

On May 1, 1886, the Federation of Organized Trades and Labor Unions (FOTLU) called a national strike to advocate for an eight-hour workday. The effort was centered in Chicago, where an estimated 30,000-40,000 workers staged walkouts throughout the city. The movement culminated on May 4 at Haymarket Square, when a rally turned tragic.

A crowd had gathered in what is today’s Fulton Market District in response to the police attack that killed striking workers the day before. Despite the circumstances, the crowd remained peaceful. When a battalion of 180 policemen arrived and called for immediate dispersal, the speaker of the crowd refused. All of a sudden, a bomb exploded in front of the advancing police. Eight officers died and 60 were wounded; an undetermined number in the crowd suffered from injury or fatality.

Eight men were rounded up and stood trial. All were tried as accessories to murder and found guilty, despite the unknown identity of the bomber to this day. The trial is now considered a gross miscarriage of justice.

In the aftermath of the Haymarket affair, labor unions were largely suppressed. Media blamed the riot on communist and anarchist leaders, and many labor unions disassociated themselves from radical-leftism, instead choosing to embrace liberalism.

International Worker’s Day, celebrated on the first of May, was established by the Second International, a federation of European socialist labor parties, to commemorate the Haymarket Affair. Because the day is associated with traditional spring festivals in Europe, it is also referred to as May Day or Labour Day. May 1 continues to stand as an important date for contemporary workers. Recently, frontline workers and renters used the day to go on strike during the COVID-19 pandemic.

In the United States, it is more common to celebrate Labor Day on Sept. 1. The federal holiday owes its existence to striking workers at the Pullman Palace Car Company in Chicago, where hundreds were laid off during the nation’s economic recession; those remaining had their wages cut. In response, workers walked out of their jobs and boycotted with the help of the American Railway Union (ARU), halting railways in 27 states.

On June 28, 1894, President Grover Cleveland signed the bill making Labor Day a holiday for federal workers. The next day, workers attending a speech by Eugene V. Debs in Blue Island, Illinois, set fire to nearby buildings and derailed a locomotive. The government called for an injunction to break the strike. On July 3, Cleveland ordered troops to squash the movement, inciting more violence and concluding with the deaths of at least 30 workers.

The 20th century had its own set of monumental union moments centered in Chicago. In 1905 the Industrial Workers of the World (IWW) had its founding convention in Chicago. The IWW pioneered “industrial unionism” as opposed to the craft-specific unionism preceding it, and was revolutionary in its attempt to organize all workers regardless of race or gender.

In the 1930s, Chicago became central to the nationwide industrial workers’ movements because of its role as a major manufacturing city. During this time, the Congress of Industrial Organizations (CIO) was formed. They prioritized Black, Mexican, and women workers for mobilization, successfully advancing conditions in the meatpacking, steel, and garment industries. The CIO was instrumental in creating the middle class and created the basis for contemporary unions.

Today, the rise of social movements has led to radicalization and growth within labor activism. Coalitions of Chicago workers continue to lead the fight for workers’ rights, bringing attention not only to wage gaps, layoffs, and unsafe conditions but also the racial and gender dynamics that inform these inequalities.

Alongside Chicago’s Service Employees International Union (SEIU), the Chicago Teachers Union (CTU) has been instrumental in Chicago’s progressive movement, aiding in the election of six socialists to City Council. The CTU continues to threaten resistance, claiming that students and teachers were not provided safe schooling and working conditions amid the pandemic. In a press release from Sept. 1, 2021, the CTU states: “180 schools have no full-time nurse this fall, even as COVID continues to disproportionately hammer Chicago’s Black and brown communities, whose students make up 90% of CPS schoolchildren.”

On Sept. 23, 2021, dozens of workers staged a walkout at the El Milagro tortilla factory for similar reasons; at least 85 El Milagro workers have contracted COVID-19 since the pandemic began.

Now, at our front door, workers of AICWU are calling for better conditions at one of the country’s foremost cultural centers. Their mission is to advocate for transparent, safe, and equitable working conditions by dismantling the institution’s colonialist and racist origins and centering BIPOC experiences. In doing so, AICWU attempts to add its acronym to the long list of Chicago unions fighting for a better workplace.

Oh, The Horror!: Terrifyingly Terrible Musicals That Couldn’t (And...