Emilly Silveira Andrade looks into Justin Bieber’s perplexing Artist of the Year win at the 2021 VMAs. 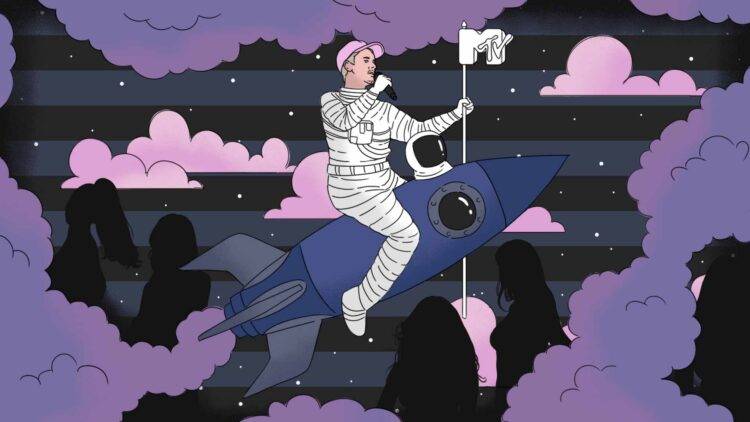 The MTV Video Music Awards have always been an iconic night of celebrating artists. Many moments from the show’s run in the 2000s are still talked about nowadays —  Beyoncé’s pregnancy reveal in 2011 after her performance of “Love On Top,” Britney Spears’  2001 performance of “I’m a Slave 4 You” with a python, and how could we ever forget Kanye West interrupting Taylor Swift in 2009 as she was accepting the award for Best Female Video for “You Belong With Me”?

This year’s VMAs had a few understandable wins, and some questionable ones. Many talented artists were present, and the awards show hosted by Doja Cat definitely had some highlights that are worth mentioning — that random fight between Conor McGregor and Machine Gun Kelly, and Doja Cat herself wearing a blue-and-yellow worm outfit that covered her from head to toe.

The most talked-about moment of the show, however, was Justin Bieber winning Artist of the Year, in which he was up against Doja Cat, Megan Thee Stallion, Ariana Grande, Olivia Rodrigo, and Taylor Swift. Five artists that all released amazing music throughout the past year, yet somehow the “Peaches” singer was the one that won. How did this happen?

Don’t get me wrong. Bieber is an amazing artist, and I am not diminishing his success and accomplishments. But let’s be honest, all the other artists nominated in this category deserved more than him this year.

Let’s recap this past year, starting with the winner for Best New Artist and Song of the Year,  Olivia Rodrigo. Her debut album “Sour” opened at number-one when released, with almost every track charting on the top ten of Spotify’s “Top 50 – USA” playlist for a week. She went from being a Disney Channel star to a pop songstress welcoming new fans of all ages in a short period of time. Rodrigo’s “Good 4 U” is too catchy to forget as well — like a damn sociopath. No wonder she had the second biggest album sales of 2021, coming after Taylor Swift’s “Evermore.”

Speaking of Swift, her eight and ninth albums, “Folklore” and “Evermore,” reached the top of the chart on the Billboard 200 chart twice in 2020. The latter, which was released in December of 2020, has since reached the top of the chart again in June 2021. Needless to say, she dominated the music scene both this year and last year — how is that not enough to win Artist of the Year?. She also has one of the biggest fan bases out of the artists nominated in this category, therefore if this really was based on fan votes, Swift should have won.

Ariana Grande won Artist of the Year back in 2019 during her “thank u, next” era. Although it was a big year for Grande — her sixth studio album “Positions” debuted at number-one on the US Billboard 200 chart — her 2020 album might not have been enough to win this year.

Megan Thee Stallion is probably the artist who grew the most this year. From “WAP” to Ariana Grande’s “34+35” remix, she has had the biggest collaborations and one of the best records of 2020 with her debut album “Good News.” She still has far to go, however, and maybe this year wasn’t quite her year to win this award… because someone outshone her.

Doja Cat, the host of the evening, was the favorite for this award — she was nominated for five awards, was the host, and performed that night. However, she only took home two awards — Best Collaboration for “Kiss Me More” (ft. SZA) and Best Art Direction for “Best Friend,” a music video by Saweetie which featured Doja Cat. She has an enormous amount of online clout, and had her name in the spotlight for the whole year, including on Twitter. She was even “cancelled” after videos of the singer chatting with incels on Tinychat emerged, accusing her of encouraging their misogynist views, laughing at racist remarks, and wishing she was not Black (her father is a South African producer and actor and her mother is a Jewish-American painter). The statement released afterwards — which has since been removed from her Instagram — was not much of an apology; it was mostly excuses as to why she uses chat rooms and at most acknowledging that she should have avoided some crowds. Some of her fans accepted it, and the industry chose to turn a blind eye to this situation — a proof of how her clout worked to her advantage. If the award was really a fan favorite contest, she clearly could’ve won as well.

Justin Bieber, the only male nominee, also had a big year like the other artists in this category. His album “Justice” definitely showed off his now-defined vocals, demonstrating how much he’s grown since his debut, and earning him seven award nominations. Two of his singles made into the Billboard Hot 100 —  “Peaches” (ft. Daniel Caesar and Giveon) reached the top spot, and “Stay” (ft. The Kid LAROI) reached Number One four weeks after its release. But the other artists all had albums and songs that topped the charts for longer than Bieber’s.

If you try to Google how the VMAs winners are chosen you do not get a concrete answer. This year’s voting rules mostly focused on how we, as participants, can “submit our Nominee preferences for all categories during the General Voting Period” on their website. And that was it. Nothing else about voting was mentioned. I re-read the rules three or four times, Googled some more, and found nothing about how this year’s voting occurred.

It clearly follows that MTV would ultimately choose the artist who gives them the most views and money for Artist of the Year. And yet, for some reason, Justin Bieber was the chosen one.

He has not been on their stage since his 2016 meltdown after performing (and getting booed). Was it a deserved win, or was he picked out of favoritism? He has a large fanbase that could have spent hours of their days voting for him, but so did the other artists’ fans.

Having a ‘catchy’ song should not guarantee the title ‘Artist of the Year.’ You almost ask yourself what constitutes a candidate to win such an award. Somebody with a comeback story, or who has favorably been topping the charts this year? It feels like a throwaway giving it to Bieber, who has dropped good singles every now and then instead of a good album consistently like the other nominees this year. Did MTV believe this was a great opportunity for Bieber’s ‘comeback’, or am I simply upset because I truly believe that the other nominees deserved to win more than him this year? I honestly do not have a straight answer. But then again, neither does MTV, when it comes to how they give out their awards. And when the rules are unclear, anyone can get away with anything.

Auteur Theory: Paul Schrader and The End of the...