Reading “If They Come For Us”

The debut poetry collection by Fatimah Asghar uses varied forms to guide readers through a historically important, and traumatic, moment. 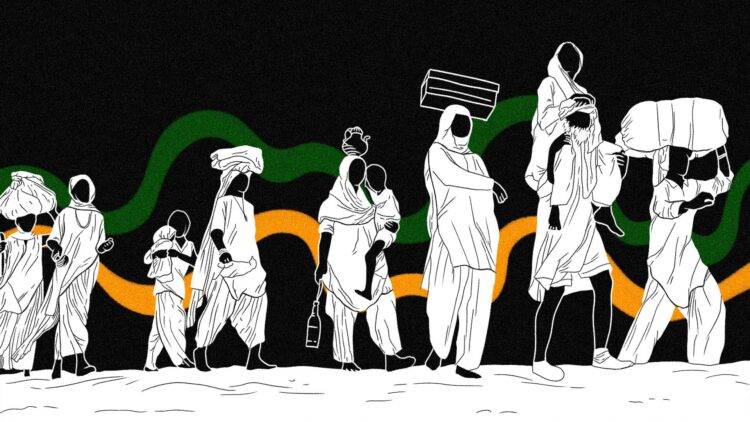 Fatimah Asghar is known for her work as a screenwriter and co-creator of the Emmy-nominated series “Brown Girls,” but Asghar’s writing dexterity expands beyond narrative into poetry and performance. Asghar has performed spoken word at numerous venues, has published with respected literary publications, and received the Kundiman Fellowship and the Ruth Lilly and Dorothy Sargent Rosenbery Poetry Fellowship. Asghar published her debut poetry collection, “If They Come For Us,” in 2018.

The poetry collection follows the personal experience and emotional wanderings of Asghar, while foregrounding the history of the 1947 Partition of India and Pakistan. Asghar illustrates her narrative as a young orphan undergoing psychological and moral growth without the guidance from parents through themes of race, religion, sex, and identity. Asghar’s lyrical verse and experimental forms delve into generational trauma and weave history through the connection of pain. You become engrossed by the dichotomy of the historical and contemporary, serving as an ode to life and death and love and fear.

Asghar’s collection begins with a preface that details the repercussions of the Partition as one of the “largest forced migrations in human history” to this day. (If you are not familiar, you can learn more about the Partition here.) The poetry requires time and intention while reading, and the quality of the writing and the significance of the history is worth the effort. The variation of forms engage the reader as Asghar presents a combination of familiar, closed, and playful structures that simultaneously challenges the reader. The forms themselves range from couplets and tercets to floor plans and bingo boards. The poem “Map Home” is composed through an unanswered crossword puzzle, where the rectangular grid visually parallels a map and the clues connect through a second-person narrative that centers around belonging and being lost. The poem “Partition August 15th, 1947” is detailed through a phrasal template word game where the reader is occasioned to fill in the blanks prompted with words like “country” and “religion,” which both confronts the reader directly and develops a complicated and experimental approach to examining marginalization.

While reading this collection, I was drawn to the intertwining of the individual exposition with the history. I was struck by the poem “The Last Summer of Innocence,” which is an intimate snapshot of days with young sisters navigating quickly growing up. The vivid language of the wounds on their bodies parallel the internal pains of finding identity through emotional rawness “my skin full of sores / pussing & oozing as the blood fled my body / trying to find anything else to call home.” The poem offers such intricacies that I can’t stop returning to it.

I was equally attracted to the poem “A Starless Sky is a Joy Too,” which paints a narrative of family in dream-like memory with powerful language that sticks with you. “The dream they came for breaks like family. But here is the dream no one expected.” Within this piece, there is an integration of poetry from Nikki Giovanni. The final line of Asghar’s poem reads “& no one understands all the while you were quite happy,” referencing the final line from the poem “Nikki-Rosa” which reads “and never understand that all the while I was quite happy.” Giovanni is also a poet who focuses on heritage, identity and formality through emotion and memory. The poem “Nikki-Rosa” specifically is from Giovanni’s collection “Black Feeling, Black Talk, Black Judgment” published in 1968, a revered collection that deals with generational trauma through lyrical intimate form and brings to light political topography.

Asghar presents history through streams of sensation, offered in the collection as the several poems titled “Partition,” which confront directly the violent history and marginalization of Muslims and South Asian culture. The Indian Independence Act of 1947 divided colonial India into India and Pakistan. Britain’s abrupt withdrawal from its former colony left the country in chaos, which devolved into a destructive mass migration in which hundreds of thousands of people were killed and 10-20 million displaced. Asghar speaks to this with a presentation of the British destruction and abandonment through, “freedom spat between every paan-stained mouth as the colonizers leave / & the date trees dance in Ramzan’s winds.” The same colonizers that stole the land eventually treated the culture as peripheral, which is a theme within the primary “Partition” poem: “you’re indian until they draw a border through punjab. Until the british captains spit… as they sip your chair, ass so much foam you can’t taste home.” Asghar brings the foundations of the Partition into the contemporary oppression of history and religious discrimination through a statement about how much is left masked: “& we knew nothing of history. Just the shit we read in class about gods not ours.”

The bounds of the history that Asghar illustrates develop through round and vibrant vignettes. Through the portraiture of figures, Asghar envelops the complexities of language to embellish the composition of the beautiful, heart-wrenching, political and vulnerable. The final piece and title poem, “If They Come for Us,” continues to foster the sense of belonging through a forward projection towards the final line, “I see you map / my sky the light your lantern long / ahead & I follow I follow.” If you enjoy reading poetry collections that play with form and arresting diction, are interested in viewing history and identity through a personal lens, and can handle a powerful emotional rollercoaster, I would recommend this collection to you.

Literature Reading “If They Come For Us”
« Previous Story

#BookTok: the Platform Inspiring a New Generation of Bookworms

Has the Death Knell of the Novel Finally Been...