A look at creators on TikTok making a difference for mental health around the world. 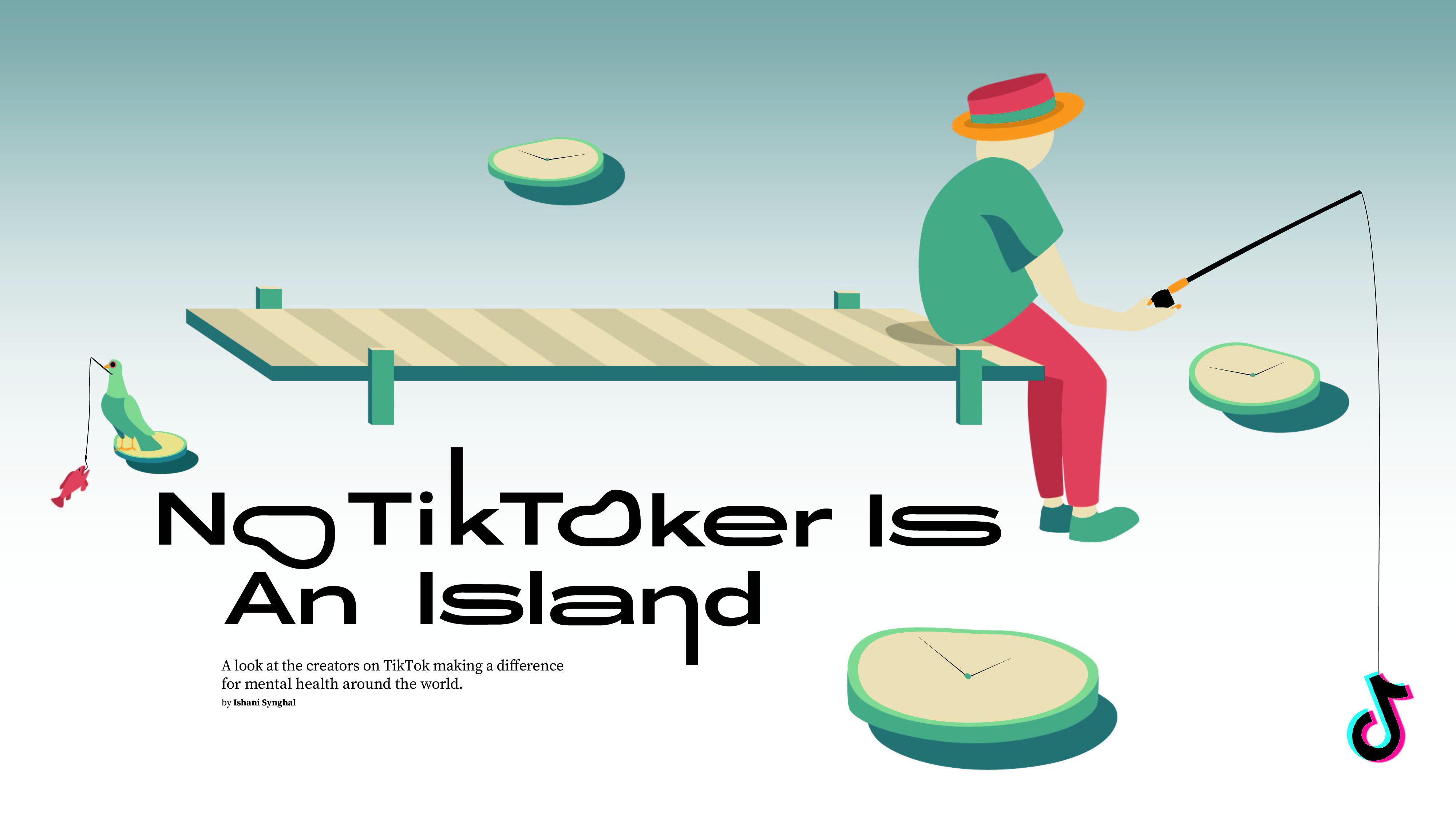 “Iʼm ready if you are!” my new therapist enthusiastically greets me. Four years and four months ago: That was the day I was diagnosed with Major Depressive Disorder (MDD) and Post Traumatic Stress Disorder (PTSD). I was a sophomore at NYU.

Coming from a family with two immigrant parents from India, balancing living a hyphenated identity (Indian-American), and always having been praised for being “the mature one,” in hindsight this was not a surprise.

I can firmly say now that those diagnoses changed my life. I started going to therapy weekly, took my antidepressants daily (tasks that are still challenging), and worked on unlearning the stigma around mental health that had been drilled into me by my culture and the hush-hush nature of the topic among my peers. “Find your communities,” my therapist had said.

“Find your communities.” Fast-forward four years. Itʼs 2021, and while mental health awareness has increased, the stigma still remains, especially on college campuses. bell hooks writes of building a “love ethic,” in which love is defi ned as “the will to extend oneʼs self for the purpose of nurturing oneʼs own or anotherʼs spiritual growth.” With the pandemic still ongoing, itʼs easy to wonder: Is anyone practicing this anymore?

After talking one night with a friend, she convinced me to give TikTok a chance.

I was skeptical, but I downloaded TikTok anyway — and delightfully discovered I had been wrong. I found many accounts that advocated for self-love, mental wellbeing, and connection. I reached out to three of these TikTokers to share their thoughts
on what itʼs like to create a space for open, educational conversation.

Sweeney heard about TikTok through her 13-year-old daughter and uploaded her first video in July 2020, about how the brain only has 3 hours and 53 minutes of focus in a day.

“As a productivity coach — people go to TikTok to procrastinate. I wanted to support people in their productivity journey, and it was such a fun and easy mechanism.”

Now, with over 492,000 followers, Sweeney explains, “I was literally knocked into productivity.” Seven years ago, Sweeney was struck by a car walking across the street that left her with a traumatic brain injury. “Seven years and a whole lot of healing, therapy, research, education, and practice — I now teach others to be so in control of their brains that they get everything they want, starting with mastering their time and energy by combining neuroscience, therapeutic techniques, biology, psychology, and physiology when talking about productivity.”

Sweeneyʼs most noteworthy videos are “The Ideal Day Series,” in which she focuses on the neuroscience of the rhythms and currents of the brain through episodes featuring different aspects of “the ideal day.” These episodes also respond to specific questions in her comments or in her DMs.

“My favorite part of this work is witnessing or hearing someoneʼs breakthrough. A simple tool or deep neurolinguistic programming work — seeing how it has created a course correction in someoneʼs path is fuel to my fire.”

An incoming Psychiatry Resident Physician, Jake Goodman is using his platform to upload content that centers the importance of mental health. With 912,000 followers and growing, Goodmanʼs TikTok originally tracked his journey to medical school, provided tips for pre-med students, and made content about depression, anxiety, and how to seek help.

He had always wanted to be a doctor, and when one of his fraternity brothers passed away from suicide in college, he became more determined to pursue medicine in mental health.

“I really saw the damage untreated mental health can have.”

The first time around, Goodman was rejected from every medical school he applied to. In the midst of reapplying, he worked many jobs, including driving for Uber, and began volunteering at the University of Georgia to offer advice to pre-med students. The sessions started increasing in student turnout and need, so he started traveling around to other colleges. Goodman also used Instagram to share educational posts, but found TikTok right before the pandemic began.

Goodman went viral pretty quickly. The video was titled “What getting into medical school actually looks like.”

After gaining followers overnight, Goodman chose to start making videos advocating for mental wellbeing. He is most popularly known for creating a virtual FaceTime video.

“The purpose of these FaceTime calls is to simulate a real call in order to help people feel more comfortable and safe in uncomfortable situations such as a bad first date, or walking home alone at night,” he told me. “These videos have been viewed over 100 millions times in the last few months.”

Moving forward, Goodman wants to move into policy and advocate for mental health education, especially with college students. “What I want to do with this platform is I want to be at the table when mental health policies get enacted and bills get proposed. … I am motivated by the people that I reach and help. I get DMs everyday and emails everyday from people, that theyʼve been having suicidal thoughts, or are in a depressive state, but when theyʼre on my account they feel less alone, more empowered … that sense of community and empowerment is what motivates me.”

Now with 1.5 million followers and growing, Dereniowski uses his story to talk about mental health, common misconceptions about the way depression and anxiety are experienced, and why itʼs important to get help. His most famous videos feature him running through the city with red block text at the top of the screen, exploring some aspect of mental health, like “6 signs youʼre beginning to heal.” With music and voiceover, Dereniowski addresses the things that are silenced when it comes to mental health, like “Toxic is Toxic: Do YOU Agree?” which addresses unhealthy family dynamics.

Originally from Canada, he failed out of college at 18. “I was really at an all-time low in my own personal life, on top of my academic life,” he told me. Over the next seven years Dereniowski did everything he could academically to become a competitive applicant for medical schools, and realized he had a story he wanted to share. He started an Instagram account and posted his story “in hopes that maybe Iʼd reach that one person” who needed it. And there was that one person — this person opened up and shared his struggles with Dereniowski, thanking him for speaking up. “He was really real,” Dereniowski told me.

After that, Dereniowski held an Instagram Live every night for three months with medical students, residents, and doctors around the world. The mentee/mentor relationship was something that inspired Dereniowski to encourage those who were experienced, to share their struggles and how where theyʼd gotten to wasnʼt a linear path. Through this work he created this formula: vulnerability = relatability = empowerment. This was so powerful, he got invited to speak across North America to medical students and share his story.

In January 2020 he moved to Sydney, Australia to attend medical school, and the pandemic hit. He had ACL knee surgery, went through a breakup, still had medical school — and the weight of all that plus not being able to go home really hit him.

“I remember days I would go on runs in the city and cry because there were all these random strangers around me and no one would know me.”

Dereniowski sought support and ultimately found himself on TikTok after Jake Goodman, a good friend, encouraged him to join the platform. “The formula wasnʼt just about academics, but also how I speak from a mental health perspective.”

Even though Goodman and Dereniowski have never met in person, they founded “Mental Health Movement” in October of 2020 as a clothing company on a mission to normalize conversations around mental health and break mental health stigma. Since launching, they have raised over $2,000 for the American Foundation for Suicide Prevention through a portion of clothing sales and philanthropic events. They have also started three $1,000 scholarships in partnership with bold.org available to students in
the U.S. who have battled mental illness.

Dereniowski believes vulnerability is about coming to terms with your true self, and how you never know who will become empowered by relating to your story.

TikTok communities like these three are changing the way we approach mental health conversations. All possess a determined awareness of the work that must continually be done to build communities that hold all the intimacies of grief and joy: two emotions on the same island, just on opposite sides. All are doing it out of a place of love — the kind of love that is embedded in the arteries of community, the kind of love that breathes life, the kind of love that proves the “love ethic” exists. Perhaps then itʼs not crazy to think that TikTok has the power to become a radical empathy machine. Regardless, belonging is hard, and it is hard for everyone, but these three content creators are making it just a little easier.

Entertainment, Featured No TikToker is An Island
« Previous Story

The Supermodel: Muse, Divine Other, Alienated