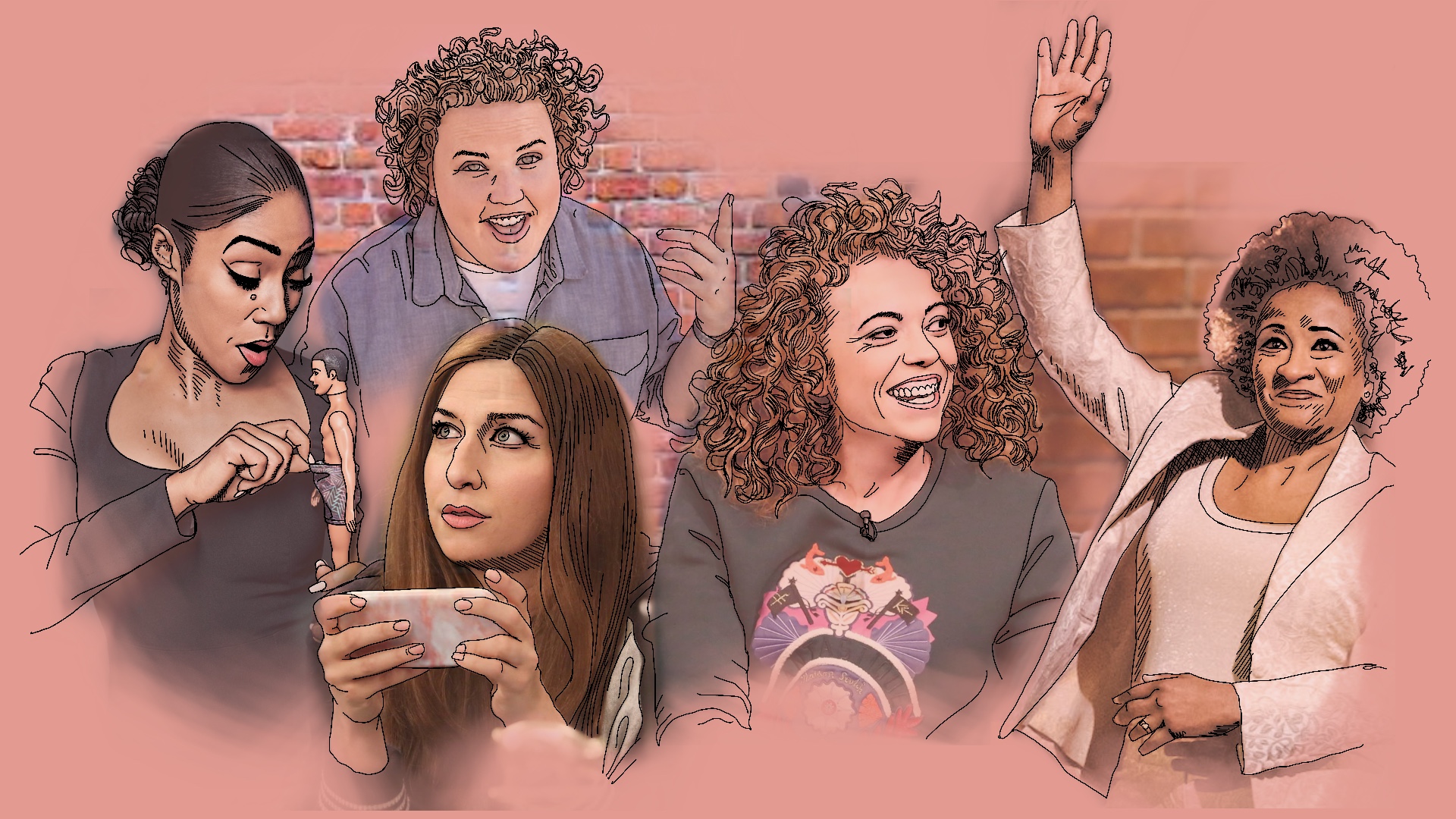 By now, the majority of the population is sick of hearing old white men talk. Luckily, your entertainment doesn’t have to depend on it.

Netflix offers a variety of diverse stand-up comedians — whether you’re looking for escapism, cultural critique, or Michelle Wolf bringing her incredibly shrill voice to a bit about otter sex, these comedians have you covered, and you don’t even have to leave the comfort of your home.

Fortune Feimster, Tiffany Haddish, Chelsea Perretti, Wanda Sykes, and Michelle Wolf all bring energy and joy to their comedy and, in turn, to the viewer. These women creatively navigate their own unique experiences in entertainment and in the world, expertly crafting those experiences into specials that are worth celebrating.

Fortune Feimster is an absolute delight. In “Sweet & Salty,” her energy is relentlessly bright and continuous, delivering a confident joy to November 2020.

This special is filmed in North Carolina, and throughout the hour, Feimster leans into her Southern upbringing. This is a perfect watch if you want to laugh about middle school but can’t quite handle the secondhand embarrassment that accompanies a show like “PEN15.” “Sweet & Salty” tempers the awkward adolescent experience with the wisdom she has gained since then. Feimster spends a lot of her time on stage joking about her childhood in a way that is warm, sweet, and confident in ways that aren’t really nostalgic. Her experience as a fat queer child is a perspective we don’t often get in popular culture and it is a very welcome breath of fresh air.

Feimster navigates her journey with honesty and radiant authenticity. Not even five minutes into her special she states, “Some people, if they were a fat kid, they will look back on it and be very bitter about it. Not me! I loved being a fat kid!” The topics Feimster covers range from the girl scouts to swim team, from debutantes to self-discovery, and even when the concepts get difficult or sad, as jokes are wont to do, they are delivered with such radical self-acceptance that is so unique to the ways women are taught to be in today’s world.

Tiffany Haddish: She Ready! From the Hood to Hollywood!

Tiffany Haddish’s 2017 special is perfect for times like these when reminders of strength are precious and inspiring.

Haddish makes brilliant use of the stage and utilizes a variety of expressions — funny faces, a changing tonality of her voice, and manipulation of her body language. Throughout the hour, Haddish reflects on the more difficult parts of her life and what got her through them. Instead of being held down by the weight of the tough topics she tackles, among which are foster homes, abusive relationships, homelessness, and racism, she uses the experiences as fuel for her fire and learning experiences. Nearly 40 minutes into the special, Haddish brings the viewer into her life and tells a story about going to a party at the same nice house where she used to park her car in front of while she was homeless — it’s a delightful full circle.

The viewer is lifted up and inspired by the infectiousness of Haddish’s good energy and brought to a place where they can laugh with her and cheer her on. It is surprising, considering the difficulty and weight at the root of her material, that this is a feel-good watch, but it is. Haddish masterfully uses hard experiences to craft a heartwarming hour of comedy that leaves the audience proud of her for bringing forth this honest, down-to-earth, diamond of a show.

Chelsea Peretti: One of the Greats

Chelsea Peretti, best known for Gina in “Brooklyn 99,” brings the theatrics with her 2014 special “One of the Greats.” Peretti introduces the show with, “So many trials and tribulations brought me to this point. All the crazy years of my life stacked on top of one another in a pile of mistaken identities. I did countless hour specials where I looked like a damn fool, trying to be something I wasn’t.” Then, an opening shot is of Peretti on a motorcycle driving to rock instrumentals that kicks off a montage of pre-show preparation that includes voice over by Peretti, flashbacks to her previous stand up performances, and the positioning of herself as “One of the Greats.” The last line of the intro is: “I guess you could say I’m a direct vessel of God.”

This theatricality is maintained throughout the entire hour-and-fifteen minute run time. While Peretti does venture into some more difficult topics, for the most part, her jokes remain pretty light. Throughout the special, Peretti utilizes her voice for a variety of impressions and dialects, and all the while maintains a very strong silliness. She sustains that silliness through big gestures and movement with nonsensical cuts to someone in the audience who is having a cup of tea or eating an egg or is just a dog. Her topics range from unwarranted male confidence, small talk, and conversation starters, to comment culture and dick pics. I highly recommend watching this if you want to spend an hour and fifteen minutes back in 2014, before America ever experienced COVID-19 or had an orange president.

Wanda Sykes is not who you want to listen to if you are looking for escapism, but she is absolutely who you should look to for relevant cultural critique. She has been doing comedy for a long time, and as a Black woman married to a woman, if you are going to listen to anyone make jabs at the current political climate, it should be Sykes. Sykes’s comedy brings some much needed levity into a very stressful time, as this special was filmed in 2019, so all the material she presents is pre-2020.

In the beginning of the special, one of Sykes’s biggest talking points was when Trump boarded Air Force One with a piece of toilet paper stuck to his shoe. Remember when that happened? Of course not — we have a lot bigger things to worry about now. Throughout her special, Sykes moves from the president, to the #MeToo movement, to the racist difference between the opioid crisis and crack epidemic. “That’s for white people, opioid crisis. Because of racism, Black people, we don’t even get our hands on opioids,” Sykes states before talking about how she didn’t get them for her double mastectomy but doctors give them to white people like candy.

Heavy topics, though, are delivered with biting wit and clarity. The second half-hour of her special is a little lighter; it deals with her life as a Black woman with a white family (and their lice problem) and is rounded out by a ten-minute bit on the topic of aging featuring the character of “Esther,” her fat roll around her stomach. Sykes tackles aging honestly and it is resonant because women are expected to have a shelf life of 35 years. Sykes’ entire career is impressive and “Not Normal” is no exception.

Michelle Wolf is your woman if you’re in the market for something a little more vulgar. Actually — a lot more vulgar. She begins her special with a bit prompted by an Instagram comment that claimed otters have sex with baby seals that segues into the conception of labradoodles. Wolf doesn’t use her body as a prop or use the stage space in the way many of the comedians in this list have. Instead, her shrill and raspy voice combined with her high energy keeps the show interesting. Many of the material Wolf utilizes enters territory that is generally avoided or considered taboo. Which is to say — this is definitely not something you want to watch with your parents around. She does not shy away from topics she deems gross; she spends a very long time talking about tampons and giving birth. When Wolf is talking about whether or not she wants a baby, she states she wants to breastfeed “but only because I want to use breast milk the way a clown uses a flower with water in it.” Her voice accentuates and complements every joke she makes.  Most female comedians stay away from periods and penises, but Wolf goes there and stays there with conviction. Wolf uses her special to talk about things most people love to hate: Cancel culture, white feminism, white men, and abortion. She’s bold, raunchy, and very funny. Michelle Wolf’s special is shocking and a little offensive at times, but she is entertaining, and she delivers.

This is just a small sample and by no means an exhaustive list of the funny ladies you can watch on Netflix. Now that you have a little something to go off of maybe we can retire Chris D’elia and Louis C.K. You have other options! Women are so funny, and I hope this list encourages you to expand your horizons and offers some much needed respite from the stress of these unprecedented times.

The Incredibly True Adventure of Me Needing a Happy...