Remembering the life of artist and musician Noah Wilson. 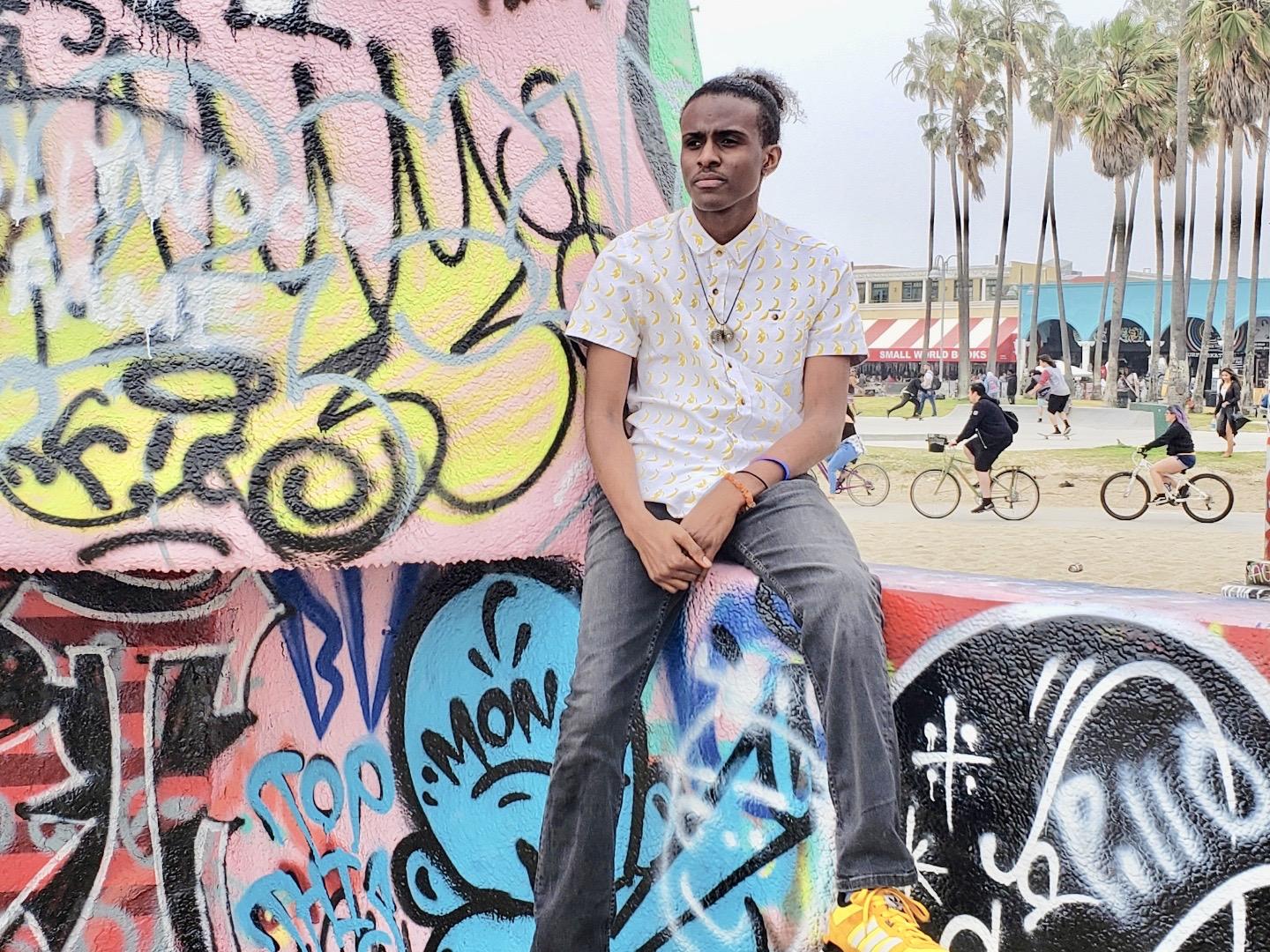 This August, BFA student Noah Wilson passed away. A painter, musician, comics artist, and sound artist, Noah would have been a sophomore this fall at the School of the Art Institute of Chicago (SAIC).

Noah grew up in Chicago, on the South Side, attending elementary school on the Donoghue campus of the UChicago Charter Schools. Raised in a tight-knit family, he was artistic as soon as he could hold a pencil. “Noah’s passion for drawing began when he was three years old. He was always drawing and had a pen and pad in his hand,” his mother Desirie McKay wrote.

He went to middle school on the Woodson Campus of the University of Chicago Chicago Charter School, where he met Justin O’Hara, who became one of his closest friends. They took many art classes together, from middle school through high school. “He always challenged himself to try and get his pieces just the way he wanted them, and he took pride in them after,” Justin wrote to F News. “He just enjoyed the process of making art. Sometimes he made it to make a statement, and other times it was just for the joy of making art.”

As a child, Noah sang in choir at the Donoghue campus. Later in high school, Noah developed a passion for making his own music. “His music is where he released a lot of his emotions, and where he took a lot of pride in perfecting it,” wrote Justin. Music was “nothing short of his calling, in my opinion.”

The music Noah listened to and took inspiration from was generally “out of the ordinary,” said Justin. “He tried to look for artists that were still on their way up and getting discovered.”

Tyler the Creator was one of his favorite artists. He was also “super into MadLib, Earl Sweatshirt, J Dilla, etc. That style of music production and rapping came incredibly natural to him,” wrote James Wetzel, SAIC lecturer in the Sound Department, in an email to F. “He could’ve easily been a famous rapper… He had just as much talent and vision as some of the big name Chicago rappers who everyone knows.”

Wetzel first met Noah while doing outreach for the College Arts Access Program (CAAP), when Noah was 14, a freshman at Kenwood. Noah’s art teacher, Todd Osborne (MA Arts Education 2020) introduced them. “He blew me away with his work and his energy — I couldn’t believe that as only a 13- or 14-year-old kid, he spoke with such maturity and understanding,” wrote James.

“I’ve seen thousands of senior portfolios in my years working with admissions, and his work as just a freshman was a cut above the rest.”

Along with Justin, Noah was a member of the Kenwood Brotherhood, a mentorship organization at their high school, whose mission is to “train adolescent males of Kenwood Academy to become leaders for themselves, their families, their communities, and school.” Noah also designed many of their logos and promotional materials. He was also active in Maggie Daley’s After School Matters, an after school arts program.

Wetzel continued: “I stayed in touch with him and his family throughout his high school career, encouraged him to take Early College Program classes at SAIC. He earned a scholarship to participate in the SAIC DuSable Teen Mural project that I facilitated.” Noah and Justin, along with other students from the South Side and the West Side of Chicago, designed and painted a series of murals. The murals are now on permanent display outside the DuSable Museum.

“Noah helped me a lot with my own problems,” Justin wrote. During their high school years, they would spend time together by Lake Michigan, talking through their problems and venting frustrations. “He just wanted people to care about each other. … Even in his darkest times, he tried to smile and be there for people.”

As a friend, Noah’s “best characteristic was how caring and non-judgmental he was,” Justin said, speaking at a memorial service in late September. “Noah understood how we are all people.”

He often said: “Don’t conform, and go against the norm.” “Everybody lives a different life than what we’ve had,” said Justin. “But to take those differences and not look at them in a negative light, and look at the positivity that it creates in the world.”

In his senior year at Kenwood, Noah applied to SAIC, where he was accepted with a Walter and Shirley Massey Chicago Scholarship. He was an honors student at Kenwood Academy, and graduated in the top 10 of his class in spring 2019. He began his BFA that fall.

Bear Ben-Dov (BFA Sculpture 2023) was one of his classmates in Research Studio I. Noah was one of Ben-Dov’s first friends at SAIC. “We had completely different interests, and types of art we made, but he always was just so awesome and excited to hear what I was doing, and excited to share what he was planning. … He was just such a good guy. Always sweet, and someone I feel like I could trust.”

His midterm project was a detailed illustration, touching on issues of life as a Black man in America, as well as mental illness. “I think he mentioned either floating or falling — depending how you look at it. I really loved that one,” Ben-Dov recalled.

​At SAIC, Noah worked in the admissions office as a student ambassador, where his coworkers said he provided a “sweet and positive light” to the office. Wrote Clayton Philips (BFA FMS & Sculpture 2021): “Every interaction I would have with him at work, he would go out of his way to get to know me and be kind.”

In his second semester at SAIC, Noah took a first-year seminar under James McManus. McManus wrote: “Noah was a sweet, strong, hard-working young man. We were both Sox and Obama fans, which is what we sometimes talked about in the hallway outside Maclean 501. Noah was a mature young adult, a slender dude at a tender age, with a dry, understated wit.”

In the same semester, Noah also took James Wetzel’s Intro to Sound course. “Noah was always interested in the convergence of his 2D work with his music,” wrote James. “He was the best kind of student to have — intuitive, sensitive, receptive, always asking questions, and just super curious about everything presented to him. He was really productive, but wasn’t afraid to just let experiments be experiments for their own sake.”

After sound class, Noah would often stay late in the lab, playing his music on the stereo. Classmates would hang back and listen.

His sound was “refined and clear,” said Wetzel. “His energy was what separated him from other people.” He was scheduled to take Wetzel’s next course, Noise, in fall 2020, along with some students from that class.

Noah began work on his first album, “MUCUS,” at the beginning of his senior year of high school, and completed it almost two years later. Wrote Justin, “I watched him put so much time and effort day after day into that.” Noah would write the lyrics on his phone. When it came time to record, he worked with the House on Knox studio on the Southwest side. “MUCUS” was released on May 27, 2020.

“MUCUS is my first musical project under my rap persona S.H.Y.,” wrote Noah in the jacket notes on Bandcamp. “MUCUS can be generally categorized as a hip-hop rap album, but more specifically under the category of grief rap. The subject matter of the 10 track project deals with my perception of the high school experience and my experience with substance abuse that was so closely related to it.”

“Most of the beats rely on funky edited and enhanced soul samples on a constant loop, smothered with bar after bar about my personal high school experience. The tracks are organized and split with jarring tv static to almost create episodes that allow the listener to experience the wide range of emotional turmoil I experienced.”

Lyrically, the album explored issues of depression, anxiety, and self-esteem. “MUCUS also served as a form of therapy for me in dealing with the trials and tribulations of my high school experience. … MUCUS attempts to organize the chaos of my emotions during this time and make it palatable enough to understand and relate to upon listening.”

Noah painting murals at the Pilsen Public Library this summer.

In the summer, he continued recording at the same studio, while also working on murals at the Pilsen Library and making shirts to raise money for Black Lives Matter fundraising efforts. When he heard about the summer layoffs at SAIC, he got in touch with Wetzel, who had lost his staff position, along with many others in the admissions office where Noah worked.

He had been battling depression for a few years, his mother told F News. In late August, she said, Noah’s depression took his life, “and destroyed his livelihood.”

“Noah is now in heaven, painting murals and mansions.”

“MUCUS attempts to organize the chaos of my emotions during this time and make it palatable enough to understand and relate to upon listening,” Noah wrote in the jacket notes for his album. “Through the use of this subject matter, I am attempting to provide solace for those who can relate and identify with my experiences.”

Wrote McManus in September: “I really wish we’d had a chance to get to know each other better. My thoughts will be with him and his family. SAIC has lost one of our most promising students and humans.”

“He was an incredibly sensitive and thoughtful person. It’s a huge loss for Chicago and for the world,” wrote James Wetzel. “I can’t believe he’s not going to be in the class this fall, but I’m determined that he’ll be with us in spirit, and the students will make extra noise for him.”

Many of Noah’s friends shared remembrances of him on social media, recalling what an attentive and generous friend he was, and his talent and commitment to his art.

“‘Don’t conform, and go against the norm,’” Justin said, quoting Noah in his speech. “At the end of the day, I say that to remind us all that none of our norms are the norm. And everybody lives a different life than what we’ve had. I say this just to show how much I wouldn’t be me if I had never met Noah. And I’ll always be grateful for the conversations we had, and what I’ve learned from him, as a person.”

“I can say without any doubt that I would never get anywhere close to the Justin O’Hara that I am today standing in front of you, if I had never met Noah Wilson. And I am forever grateful for it.”

After the speeches, members of the crowd released their balloons, which floated overhead and away into the cloudy sky.

After “MUCUS,” Noah recorded more tracks at the House on Knox studio. Noah’s mother and Wetzel are working on collecting his remaining unreleased tracks onto an album and releasing it, possibly to fundraise for mental health.

A fundraiser has been set up on behalf of Noah’s family, which you can donate to here. Stream Noah’s album MUCUS on Bandcamp.