How the world’s biggest boy band encourages kindness to ourselves and others. 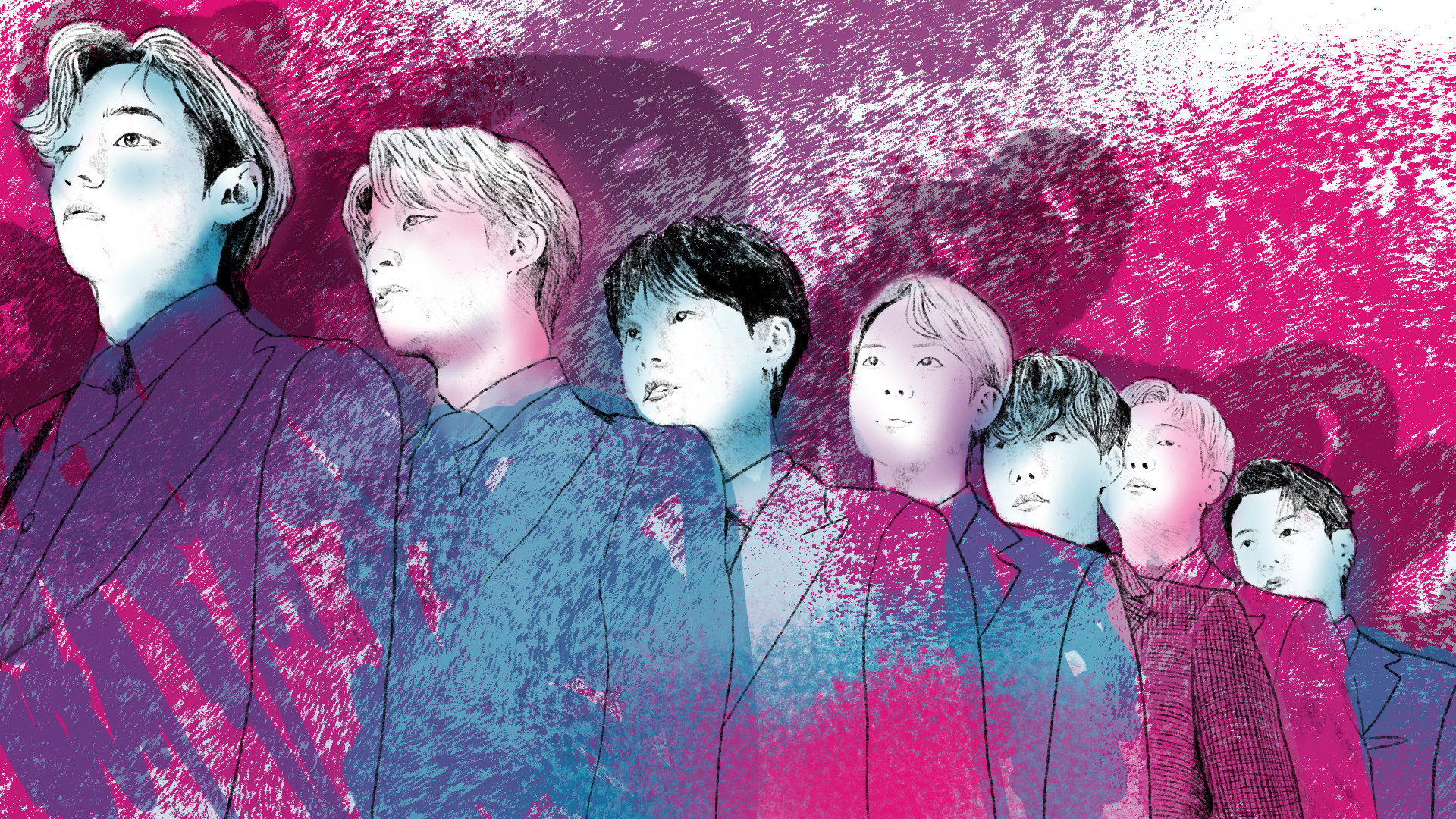 I held a lecture in January earlier this year entitled “Pop Is Becoming” in Bloomington, Illinois for a Humanities Festival. This lecture was based on Deleuze and Guattari’s idea that Pop — writing, music, etc. — is just a system of multiplicity, and that as ideas form and plateau, others inevitably rise to the surface, compounding on the original idea. I then pointed out how pop music is often based on utopian melodies, upbeat promises, and a life well-lived. I studied how this phenomenon in pop music contradicts prose as it is read on the page; lyrics switching emotions between stanzas, moderating a personality as the meter progresses.

In short, I talked about boy bands.

Coincidentally, at the climax of my poetic and music research, I had just heard BTS’s song “FAKE LOVE” off their 2018 “Love Yourself: Answer” compilation album. It was like hearing all these ideas at once, fast and bubbling. Thus began my desire to explore BTS and their facets.

This phenomenon with boy bands, consumerism, and fleeting emotion struck me as increasingly urgent, and still does. I wanted to explore the dissonance between a group of boys singing about desire, insecurity, and pop culture, and the immediate gratification of a fanbase willing to, and often succeeding, at making these topics quickly available to them.

Even if you aren’t sure who BTS is, you’ve heard of them. You’ve seen their faces on coffee cans, mall T-shirts, as the trending hashtag on Twitter … When “Dynamite,” BTS’ single of summer 2020 went live, the song broke YouTube most-viewed records within hours of its release. BTS is many things, but perhaps most importantly, it is a cross-genre Korean performance group with the transparency to be themselves. RM, Jin, Suga, J-Hope, Jimin, V, and JungKook. Together, they are a South Korean pop band singing about individualism, mental health, and literature. “Answer: Love Myself,” in particular, is a favorite of mine, attends to the idea of self-preservation and respect:

Maybe this isn’t the answer either

It’s just that loving myself

I’m looking for myself again,

But I don’t wanna die anymore.

Me, who used to be hurt,

But with BTS in particular, it’s vital to see their other angles, including their global fanbase known as the “BTS ARMY.” BTS, although talented on their own, would have no commercial success were it not for their widespread admirers — many of whom are members of the LGBTQ community, advocates for trans rights, and young girls who live unabashedly unafraid of their passions.

There is a long legacy of young girls being the foundation of a pop phenomenon’s success. When young women decide to support something, it’s so unabashed that it’s forceful, influential. Teenage girls start arena tours — sold out ones at that. They fund salaries. They create a safe space for other communities. And in the reciprocal relationship of their fans, BTS has become increasingly aware of how to use their influence to encourage social change, publicly supporting mental health and LGBTQ rights at concerts, online, and in front of the UN. In 2020 alone, the BTS ARMY entered national news for their record-breaking ability to “get shit done.”

In March of this year, a couple of months after my lecture in Bloomington, I walked into a café in Wicker Park on my work break. I walked in to see groups of teenage girls sharing coffee together, passing around artwork and fan-made posters of BTS. A receipt of your coffee got you a ticket to the birthday party of Suga, one of the BTS members. The event was curated by Chicago with BTS, a Twitter personality who helps organize fan events for BTS in the Chicago neighborhoods. They were showcasing art by My Suga Faith. All proceeds from the event went to Music Unites, a nonprofit working to transform music in inner-city education. Chicago with BTS has been active on social media promoting virtual events and fan-made art all throughout the COVID-19 pandemic.

In the midst of the Black Lives Matter movement in the United States this summer, sparking from the unjust death of George Floyd in Minneapolis, the Bangtan Boys ARMY gathered to raise over $1 million in funds for the Black liberation movement, mostly in one single day.

This fundraiser sparked one ARMY member to create an ongoing charity project on Twitter titled One in an ARMY. They raised monthly goals for rotating donation listings through a sleuth of BTS fan volunteers. Aditi Bhandari, a writer for Reuters Graphics, compiled a list of data spreading across social media platforms mapping the mass effect of the BTS ARMY lending their money, time, and support for the band and various social activism.

When I want to feel accompanied, when I want to have the best day of my life, BTS is the soundtrack to that side of me. BTS represents this constant community across borders – whether that be internally, across the street, or online. When we talk about pop music in the 2020s, we are attributing to contexts that pop music is no longer self-aware lyrics and the stereotyped upbeat rhythms. Completely modernist and evocative, BTS is about the ARMY that has embraced them.

Entertainment, Featured BTS Brings Out the Best In Us
« Previous Story