Paige Lewis’ debut book of poetry, Space Struck is alive and breathing in a world where the divine and every day meet and carry on the business of life. 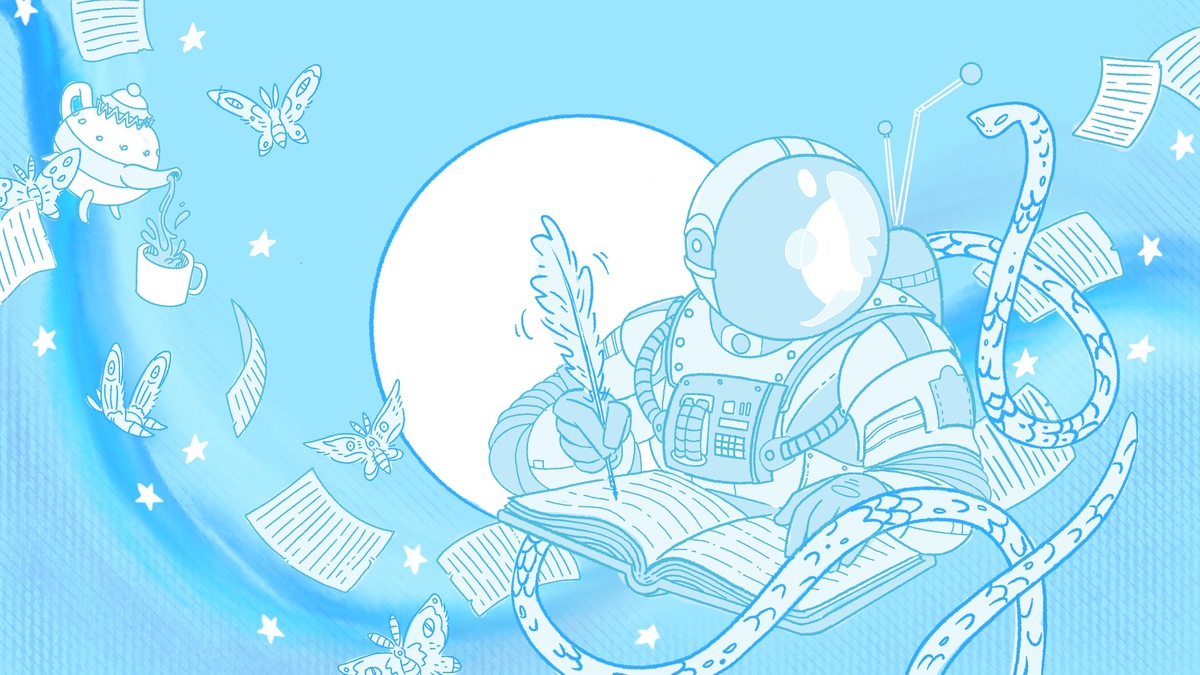 Meaning flashes through extinction and glistens in superlunary verse in Paige Lewis’ debut book of poetry, “Space Struck.” Published by Sarabande, a nonprofit literary press, “Space Struck” looks tiny and unassuming until you read the first poem. If you were lucky (like I was) you got to see Paige read their poems. The tiny voice asking questions and speaking from the depths of exploration, one so dark, so busy, it turns into a nightlight — shimmering and steadfast.

I have been trying so hard for half a month to write about Paige’s book. How do you write wonder and breath and the inside of the palm of your hand? Curious and unafraid to be weird, “Space Struck” is a collection that goes all over the world, the galaxy, to meteorites and asteroids – saints and sinners and St. Francis sighing in the corner of a studio. Wise and pretty. Childish delight wrapped in unabashed wonder wrapped with religion creeping in somewhere, a mishmash of the world we live in. Not sieved through a filter of the cool, the unattached. So present. In one poem Paige wonders, “How many feet millipedes can live without?”

The book funnels through animals and birds, nature, science, religion, and brings them straight to capitalism. This human need to capture, this human fear of longing, this human thing we do, where we try to control the world around us — and the creeping knowledge that we won’t be able to. Anxiety turns into a ghost and is always present; in one poem it turns into, “I feel / as if I’m on the moon listening to the air hiss / out of my spacesuit, and I can’t find the hole. I’m the vice president of panic, and the president is / missing.” In another, a ghost drops by so often the poet “no longer feel obligated to offer / it our good coffee.”

I keep thinking about how wondrous Paige’s world is. Space plays multiple roles in the collection. Where ghosts and saints drop in announced, hold space for conversations, questions, even depression. In an interview with the Poetry Foundation, they said, “Sometimes when I learn something new about the world, I won’t tell anyone because I know I’ll have more fun telling them in a poem.” These poems hold space for all kinds of creatures, like and unlike you and me, space for tender pain and shallow breath and shadow games. The kind of hope you don’t allow yourself to feel, lest the world break your heart. Paige lives in that space; they allow themselves to exist in there. They navigate through the world outside, alive and breathing, and the world inside without a door and window, like they were both the same. “Lately, I’ve been feeling betrayed by names : the king cobra isn’t a cobra, the electric / eel isn’t an eel, and it turns out my anger / was fear all along.”

Flush with oddities and curiosities, I count all the things I learned within the span of these 33 poems where the divine and the everyday meet. The world is collapsing, most birds are dying, star actors are ivory-billed woodpeckers and pelicans, trains whoosh in and out, balloons carry wishes to God while the poet holds a binocular with a camera feature, laughing at themselves, recording. At the book launch, I remember them saying, “Humor is my way of trying to pay the reader back for all their heavy lifting.”

These emotions are devastating if you allow yourself to word them out. Grounded in self-awareness, they look like art framed in a glass that also holds one’s reflection. “If this world is a plucked violin string, am I a part of its sound or its stillness?”

I cannot stop thinking of the freshly fallen snow on Halloween in Chicago. It was still fall; the trees hadn’t shed their reds and yellows. The morning after the snow, leaves and tree trunks had shed most of the snow, but there remained this one outline, a skeletal white line on the trees. I stopped and clicked multiple pictures, wondering if I was the only one who saw that the trees felt otherworldly — ornamental skeletons. It was magical and tender and harsh — so easy to walk past, yet if you pause, you see life happen in front of your eyes. So much like this book, which I now cannot go without. Paige’s book lives and breathes in a world that is not entirely mine but one I once knew. One I know I used to live in. Somehow their book gives me permission to find doorways again. “Space Struck” is a reminder that the tender and the painful, haunting are not too separate, not far away from each other. They co-exist and if you allow yourself to see that, it is so absurd, it is funny.