Practice Beyond the Studio: Reflecting on SAIC’s Day of Service 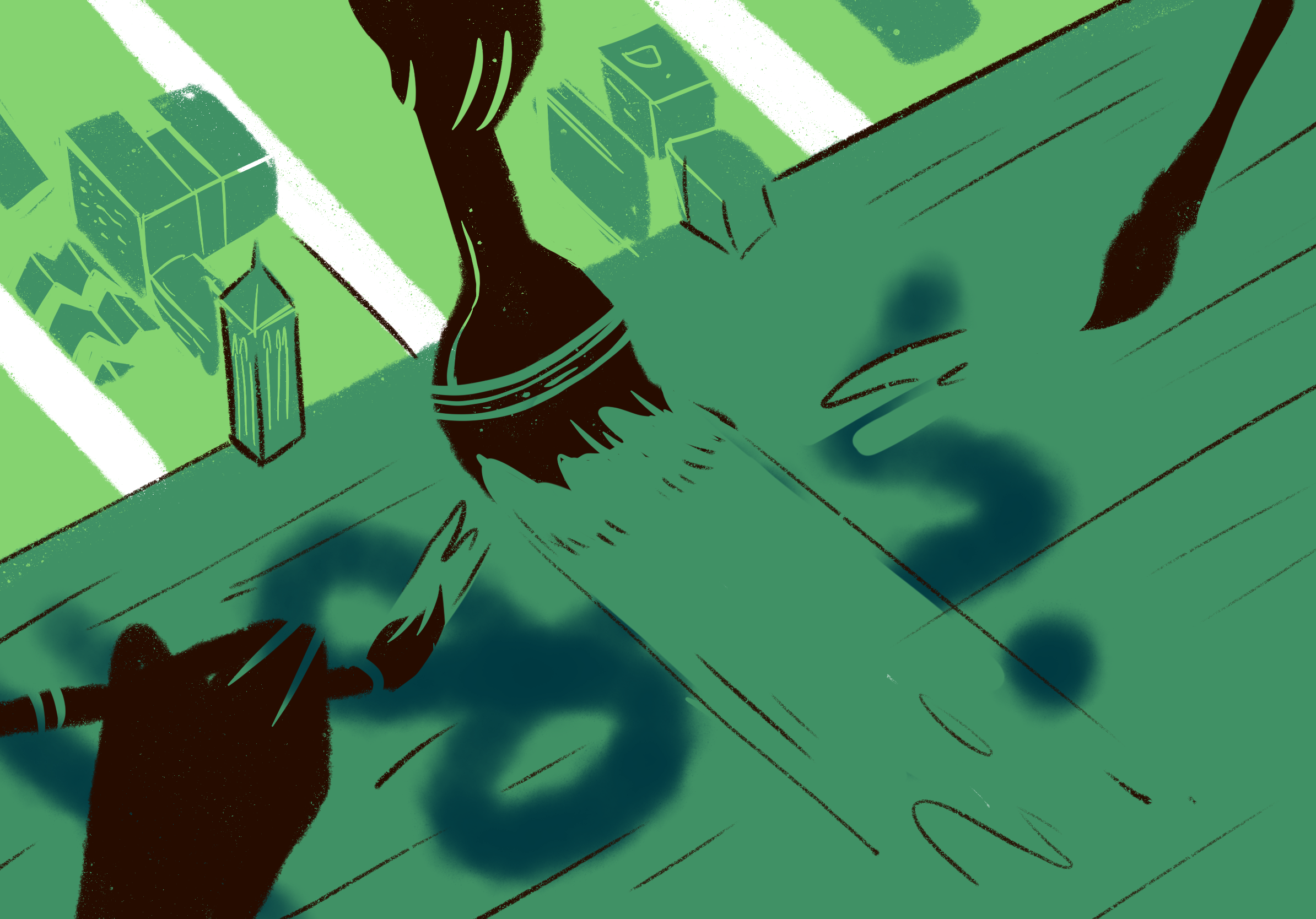 The School of the Art Institute of Chicago’s (SAIC) Day of Service is an annual mid-spring event which gathers students at the Nichols Tower in Homan Square to offer volunteer services to North Lawndale community outreach organizations. This year, some of the sites SAIC students worked in were CCA Academy, bLumen, and Unity Park via Neighbor Space. This was my first year participating. I worked as a site leader for the Unity Park site, the work for which stretched well beyond the Friday, March 29 event date.

I had the opportunity to observe and be involved in the process behind the scenes. The work is organized and guided by Jaclyn Jacunski, the Director of Civic Engagement at SAIC at Homan Square, who has dedicated herself to not only running SAIC’s programs on site but also to creating genuine connections with everyone she has worked with at the Nichols Tower and beyond. Taykhoom Biviji, research associate for the “Oaks of North Lawndale” project, works as her right-hand-man. They spent every minute together preparing for the Day of Service. This year, that meant a 10 p.m. run to Menards to pick up acrylic paints, wheeling potted plants from Jaclyn’s black pickup truck to the tower’s twelfth-floor classroom, and coordinating local catering options with participants’ dietary restrictions, which Biviji said was one of the most challenging aspects of planning.

I volunteered for the Day of Service upon receiving an email from SAIC. In a follow-up note, the organizers of the event asked for site leaders, which was something I was more than happy to try out for. After a few insistent emails on why I wanted to be a site leader and how much it would mean to me to go beyond simply volunteering, Biviji contacted me confirmed that I had the role.

An important piece of the preemptive work was physically visiting the space with which I’d be collaborating. Unity Park is a plot of land between a senior housing center and an elementary school. In 2002, Neighbor Space, a local nonprofit, obtained it from the city and turned into a public park. Subsequent restoration efforts have been led by community leaders Gladys Woodson and Marion Perkins, who have both lived near the park for more than 20 years. Their goal was to make the park into a space where kids could play, the elderly could garden, and all could rely on safety. It was extremely valuable for me to be able to visit the site and speak to the members instrumental to the cause. It gave me an intimate look into what they needed and wanted.

Despite being highly publicized on posters, email blasts, and in-class announcements, this year’s Day of Service had a surprisingly low attendance rate, with an estimated 75 students signing up to volunteer and even less actually attending. But for those who did attend, the Day of Service meant a lot of familiar faces, as many volunteers had taken classes in the Nichols Tower SAIC classrooms. We ate breakfast and lunch together, then split off into our separate groups. As a site leader, I led my group in painting a new wooden sign for Unity Park as part of the park restoration. The previous sign had grown moldy and was covered in tags, some belonging to local gangs.

Coincidentally, all of our group members spoke Spanish and almost all of us were international students. These similarities — in addition to our playlist of bachatas and vallenatos — brought us together as a group. Gladys even got to come have lunch with us and see the signs for herself, which she appreciated. By the end of the day, the signs were done and primed, and we were proud of the finished product.

Although SAIC’s presence in the North Lawndale area previously sparked controversy when F Newsmagazine contributor Samuel Schwindt suspected the school of furthering gentrification, I believe events like the Day of Service help artists and students make work that is not only cathartic but also beneficial for circles beyond those that we inhabit in our three-block radius downtown. It’s easy to get lost in our own practices and forget that the world doesn’t just revolve around art galleries and career moves.

Outside these events, SAIC at Homan Square has also created a safe space for POC students. A student who preferred not to be named and takes courses on the Homan Square campus reflected on how the environment differed from that of the Loop, where the demographic is primarily white. “Generated mainly from the white students and white complex, it’s unnerving to be a person of color in that space [the Loop],” she said. In fact, her first POC professor at SAIC was Leah Gipson who teaches the art therapy course, “Art and Change on the West Side,” at the Nichols Tower.

In preparation for this article and envisioning a future Day of Service, Jacunski talked about how it’s easy to forget that “the word art is way bigger than a museum or a gallery,” expressing her desire to have art students volunteer as an extension of their own practices. Biviji seconded this statement in his own comments on student participation, hoping that “projects start developing on their own around Day of Service.”