“Dialogues in Transit” is a series of conversations live-broadcast from a car waiting in line at the San Ysidro Port of Entry. Photograph courtesy of the artists (Cog•nate Collective).

The work of Cog•nate Collective seems to take place everywhere but the gallery. The collective, which is made up of artist duo Amy Sanchez and Misael Diaz, have staged projects everywhere from a line of waiting cars by the San Ysidro Port of Entry to the Santa Fe Springs Swap Meet. Many of their initiatives take place out of an updated 1980s camper van under the name of M.I.C.A. (Mobile Institute for Citizenship + Art), as part of a series of projects, which were included in “Talking to Action: Art, Pedagogy, and Action,” at the School of the Art Institute of Chicago’s (SAIC) Sullivan Galleries this past fall. We caught up by phone about their approach to social practice, what they’ve been reading, and how their work engages with the different communities of the U.S.-Mexico border region.

Leah Gallant: What was your work like before you started collaborating together?

Amy Sanchez Arteaga: We met in 2006, when we were both undergraduates at the University of California Los Angeles (UCLA). We both worked as co-editors on La Gente de Aztlán, a Latino and Chicano news magazine there. We did that for three years and then we realized it would be cool to collaborate in some other capacity, and so we did a project in Tijuana together. And then in 2010 we decided Misael would do his MFA at the University of California San Diego and we would spend more time at the border, and that’s when Cog•nate formalized. Working together has been the thing that has always been a constant.

Misael Diaz: We gravitated towards one another because we had a common experience of both having grown up along the border and crossed it back and forth as kids. The way that the border was discussed and theorized was very foreign to us. The dynamics that it has on a more day-to-day basis do not figure as prominently in wider conceptions of and theorizing about the border.

LG: Has your relationship to the border region changed since you started making work about it?

ASA: When we first started working on the border, we conceptualized it as a smaller zone, as one community that is split by an arbitrary geopolitical line: Like San Diego-Tijuana, or Mexicali-Calexico, which is where my family is from. But as we’ve moved further from it, even angling to Chicago, we’ve realized that there is a specter of the border that people carry in their bodies, particularly people who have crossed that border and aren’t able to cross it again for whatever reason. We sometimes speak about our work as holding a mirror up to what’s actually there, as opposed to echoing the metanarratives we hear from politicians or popular culture. What it reveals is that it’s actually a nuanced and expansive territory and concept, which our works seeks to undo in different ways.

MD: For many communities that are living in the region, there’s a lot of crossing that happens. Many people commute on a daily basis from Tijuana to San Diego; the economy of San Diego is very dependent on people from Tijuana working there. Many students wake up at 4 a.m. every morning to wait in line and cross the border and come back. There’s a fluidity that we were interested in exploring, because that was our own experience of the border, not as a space of extreme violence or trauma but as a space of dullness and waiting.

We began working at the San Ysidro Port of Entry, where the cars line up to cross from Tijuana to San Diego, and we worked there for several years, and then slowly we also began to approach working with communities that have a very different experience of crossing. So we started working specifically within migrant shelters in Tijuana and Mexicali. The shelters provide aid to migrants who are coming from Mexico and seeking to cross into the United States through an unsanctioned point of entry. But at the time that we started working there, in 2012 or 2011, they were servicing a lot of migrants that had been deported from the U.S. There was no structure in place to accommodate the high numbers of hundreds of thousands of people that had little connection to Mexico anymore. Many of them had no connection to begin with, because they were coming from Central America. We started developing projects with the shelters to support their efforts, including the tangible material needs that they were facing.

M.I.C.A. (Mobile Institute for Citizenship + Art), is an ‘80s camper van converted into a portable project space for workshops that are part of the Mobile Agora Project (M.A.P.). Photograph courtesy of the artists (Cog•nate Collective).

LG: What were some of the projects you did to bridge these two very different experiences of border-crossing?

MD: In “Something to do with crossing … ” we used narratives we had collected within the migrant shelters to formulate short scripts that we took to people who were waiting on foot to cross at San Ysidro, and we asked them to read them out loud for us to record. We then broadcast those recordings on the pirate radio from the port of entry. People crossing the border on foot through a designated point of entry were giving voice to those who were crossing through the desert. And we began to think about how to connect these two very different experiences of the border, and what is at the root of those differences, and why it is that there’s such a disparity between those who cross by waiting in line vs. those who risk their lives to cross it.

LG: You work with a really wide network of collaborators, including organizations and university classes. I was curious how having all these collaborators shifts your idea of who the audience is for the work? How does this relate to your approach to social practice?

ASA: One of the issues with social practice work that we had is this parachuting model of artists figuring out a neighborhood or community that needs help and then showing up to be their savior. Artists mine that community’s resources, then leave and take all of the material that was gathered and puts it in a gallery to enrich themselves. We’re very wary of that model of collaboration, and so what that means is you have to create actual relationships and work very slowly with different communities. It’s worked out that we’ve collaborated with students because students are inherently itinerant in a way that we’ve needed to be. We’ve been really proud of the students we’ve worked with in Anthropology or Chicano Studies who end up doing work in the arts. The way we sometimes think about our work is that there’s two of us plus whoever else wants to hang out.

MD: It’s hard to have the final thing that ends up in the gallery be just documentation of something that happened elsewhere for some of our projects. We try to collaborate in a way that allows people greater ownership of the process. It’s been very enriching to open that process to students to provide them with tools for research that they can bring back into their own disciplines, and the tools for production can be useful in other ways, regardless of whether that work ends up in a gallery or not.

LG: You’ve also worked a lot with radio and broadcasting. How or why did you start doing that? Do you have a favorite project?

ASA: When we were working at the San Ysidro Port of Entry, we started thinking about the ways people pass time to fill their waits, and radios are a really big one. We had done projects with pedestrians, and projects between the cars, so we were thinking, “How can we make these public?” It’s also funny when we listen to those early broadcasts. We listened to the really early “Borderblaster” recently, that was 6 or 7 years ago, so they also become a really interesting time capsule.

ASA: It’s a very small market in Tijuana, it’s right between the lanes of northbound traffic before the border crossing.

MD: We were broadcasting originally from inside that market. We adapted the infrastructure that we were using to broadcast so that it would fit inside a car, powered by power packs and batteries, so then we began this project called “Dialogue in Transit.” We invited people to sit inside of our cars and have a conversation that was simultaneously recorded and live broadcast, through pirate radio, as we were waiting to cross the border. We had conversations with musicians, with researchers, with artists about the border and as we cross it and as we wait in line. The duration of the conversations depend on the wait of the line. We adapted a speaker system so that vendors and cars around us can listen to the conversations.

LG: What’s a book or article that you’ve read recently that you enjoyed? Or a text that’s been important to your work?

ASA: I read a really lovely story about two gay penguins and their baby in The New York Times recently. I’m just tired of reading the news, and it was a beautiful story of family. They’re fostering a chick that these other penguins didn’t want to raise. I think they’re called Sphen and Magic, so the baby’s called Sphengic.

An important text that we’ve revisited a lot is “The University and the Undercommons: Seven Theses,” by Fred Moten and Stefano Harney. “These Days of Candy,” by Manuel Paul López.

MD: That’s one that’s been in my bag waiting to be read.
“The Album of Fences,” by Omar Pimienta, a poet from Tijuana, who was a guest we invited on the first version of “Dialogue in Transit.”

LG: If you were given the White House lawn as a space to install a work, what would you do?

MD: I would physically remove the lawn and install it somewhere else, leaving just empty dirt in front of the White House. I would steal the lawn and find a better community to take care of it. 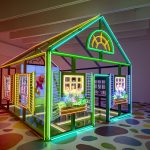