Four (more) people you might have met in the elevator. 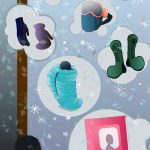 Preparing For The Chicago Tundra