Lee: I like to create things that are mythological but closely attached to reality. I make sculptures, I make installations. Early on here, I was inspired by the Palmer House protests. For me, it sounded very religious, like a ceremony. I was interested in why they did that and what they believe in. It reminded me of ancient ceremonies. People have always been afraid of something, we can’t face it alone. So we need to collaborate. To believe in something. It’s not just the totem, or, you know, the temple in itself. It’s more than that. I’m interested in representing that. I want to make more and turn everything into a performance. It’s my next step. When I was very young in Shanghai, the whole city, the whole life – it’s, it’s … the color, the shape, the shape of the buildings, the things you use, the cars, they have a warm color and shape. It’s colder now. My best memory of my childhood is when I was just standing on the balcony, leaning on the railing; I could spend a whole afternoon there just painting the cars passing by. Back at that time, the cars looked very good. They were more square-like. Now they all look very smooth. I don’t like that. I wish I could go to Cuba. I want all those cars. Vintage — for me that’s called fancy. A real car. A car-car. The funny thing is, I don’t have an arts background. I did something totally different in my undergraduate. I studied international economics because I hadn’t made my mind yet! So, I even thought about being a musician or something. But then I got into this economics school and the last year of undergrad I remembered my best memory of my childhood and that’s why I decided to go back to it. I worked for a sculptor, a curator, a painter, and learned a lot from it. I learned how to make bone structures to help suspend large structures. The anti-gravity component is important in making installations. Before, I didn’t know anything about that. But after a while, after I worked for three or four years, once I knew a little about it, I rented my own studio space. After a year I felt like I going to a real art institute to see what it was like. To be an artist is fine to me. It’s fine. My first dream is to be a sailor. Second, I want to be a sushi chef. Those are important to me, but I also need to see cats every day. These three things are the most important. And art is probably going to be the fourth. 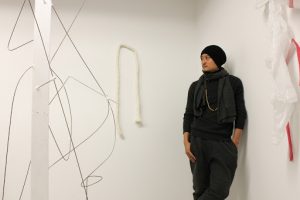