Netflix’s Latest Misses the Mark – Insatiable vs. Sierra Burgess is a Loser

Netflix provides a service much more impactful than delivering or streaming movies: gatekeeping the perceptions of beauty in women and young girls. 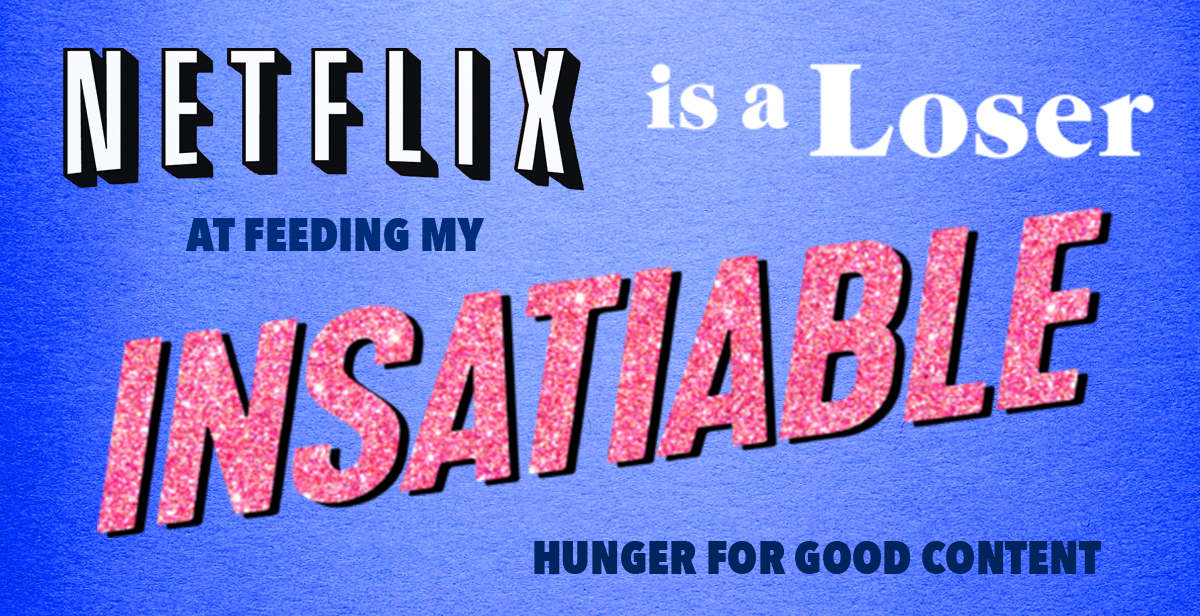 Since its founding in 1997, Netflix has quietly and controversially provided a service much more impactful than delivering or streaming movies: gatekeeping the perceptions of beauty in women and young girls.

Netflix goes about this duty in the same way a newspaper might display the happenings of a particular day, picking and choosing stories they deem worthy of attention and reverence. Many subscribers are painfully aware of this methodology as they watch their favorite movies and shows being replaced by a banner declaring, “NETFLIX ORIGINAL,” most of which are mediocre at best. It constantly tries too hard to keep up with fads and social commentary, regularly releasing documentaries on drug addiction, the porn industry, the LGBTQ+ community, and, most recently, teenage body image as displayed in “Insatiable” and “Sierra Burgess is a Loser,” a show and a movie respectively.

The discovery of “Insatiable” was, for me, like a dam breaking. It began with small cracks in the foundation of my tailored social media life, with drops of water leaking through in the form of Netflix homepage trailers. Then the water began rushing forward with a crazy type of urgency, and suddenly, the hallowed face of Debby Ryan was everywhere I turned and the dam collapsed. The Instagram Explore page? Tarnished with trailers. Snapchat? A storm of thousands of articles on the ethics of Netflix dramedies. The kid who sat in front of me at orientation? Completely absorbed in the pastel hues of feminine destruction.

Thus began my thirst for the satisfaction of conquering “Insatiable.” For those unclear about the show’s premises, the IMDB summary starts simply enough: “A disgraced, dissatisfied civil lawyer-turned-beauty pageant coach takes on a vengeful, bullied teenager as his client.” Let’s dissect. Slowly.

And… pause. The undertones of these three words are blissfully reminiscent of Doc Brown in “Back to The Future” — the disgraced, (briefly) dissatisfied nuclear physicist who’s mysteriously befriended Marty McFly. The hopes were high for Dallas Roberts’s reprieve of Doc.

This was the point I realized I would not be diving into the next “Stranger Things” or even the next “Gossip Girl” — which I can only assume was a cinematic inspiration for the creator of “Insatiable” — let alone a loose “Back to the Future” imitation. This catastrophic hellscape of hyphenated words has the same depth and painful randomness as a Wattpad fiction circa 2012.

“takes on a vengeful, bullied teenager”

Perhaps one of the things that brought “Insatiable” to the drawing board was this tired, over-milked saggy tit of a trope. After all, the Bullied Teenager™ has risen in status because it’s a tried and true method of appealing to the youth and tricking them into learning heavy lessons: “Don’t become vengeful and work with a disgraced lawyer to become an embodiment of perfection to destroy your enemies or you’ll end up like Debby Ryan. Just do you.”

Where did she get this money?

The next day, I began my descent into the inferno of fat suits, body shaming and 25-year-old high schoolers. The show revolves around Patty Bladell, a plus-sized senior in high school who’s the butt of constant fat jokes, bullying and misery until an altercation with a homeless man leads her to have her jaw wired shut so she can’t eat solid food. She loses 70 pounds and, during her trial in regards to said altercation, meets Bob Armstrong, the disgraced lawyer who says she would make a great pageant girl. Patty is flattered and dives in headfirst.

It’s important to mention this all happens within the first 30 minutes of the show, but there are other distasteful and exhausting issues to discuss in the series. The root of too many jokes has ties to pedophilia and sexual assault, tracing back to the first episode when Bob is accused of molesting Dixie, one of the pageant girls he’s coached (a claim made by her mother, Regina, after Dixie didn’t win the competition, claiming mental duress).

Bob laments about how he can’t find a solid job as a pageant coach due to the allegations, and no one but his family, Dixie and Regina, know he’s innocent. But this doesn’t stop Patty from falling in love with the 48-year-old. Even when her best friend Nonnie reminds Patty that Bob’s a potential child molester. Patty responds with a deviously seductive smile, saying, “which means I might have a shot.”  Despite it being one of the most grossly uncomfortable bits of dialogue, creator Lauren Gussis defended the incorporation of pedophilia and assault “humor” saying, “I developed a biting and dark sense of humor as a way to cope with my own insecurity because if I was laughing, I felt safe, and so this was an extension of that, on some level.”

Then because one pedophilic jest wasn’t enough Regina has an affair with Bob’s 17-year-old son, Brick. She’s eventually arrested for statutory rape and is placed in jail even though a trial didn’t take place, which is strange considering her proclamation of innocence and Bob’s work as a lawyer. I suppose though, we should be grateful for the absence of a “Law and Order: SVU” situation, because the series has more grossly oversimplified and ignorant issues to address.

For brevity’s sake each issue cannot be fully divulged, but nonetheless they will all receive some degree of attention. There’s the heavy alcohol abuse by Patty’s mother who constantly drags Patty and Nonnie to her Alcoholics Anonymous meetings and later the drug/alcohol abuse of Magnolia Barnard, a rivaling pageant girl. Then there’s Nonnie’s struggle with being labeled as a lesbian (which everyone treats as being an insult) for her outward appearance, the impersonal and random LGBTQ+ inclusion, the jokes about Chinese malnourishment and — the simultaneously least and most expected topic of them all — abortion. There’s much to unwrap in these 12 episodes, but it’s like having a stroke halfway through opening each box of social commentary. This doesn’t even include the heavily religious, demonic, or vampiric subplots.

There’s a level of impressiveness about the show, however, for its uncanny and perhaps unintended method of somehow insulting nearly every marginalized group I can think of. And of course, Netflix was quick to its defense after “Insatiable” was criticized even before it aired, claiming the series was a type of social satire that took common tropes and pushed boundaries. It’s a shame then that none of that came through, and even more shameful they cannot admit their show is tasteless and messy.

“Insatiable”’s central theme is the most concerning. The focus on feminine body image, particularly in teenage girls, has been something that’s been weighed against the gender since the dawn of time. Only now are advertisements, movies and television shows — such as “Project Runway” with their addition of plus-sized models or NBC’s “This is Us,” which focuses on a plus-sized woman who’s so much more than her weight — attempting to celebrate people’s differences. These strides are great, yes, but are altogether unrelatable for a younger girl who struggles with body image, and “Insatiable” casts a cloud of chaotic energy on the topic.

Sierra Burgess is a Loser

Perhaps, then, a shining light of hope would be found in the Netflix Original “Sierra Burgess is a Loser,” which articles have proclaimed proudly does not have a makeover scene (save for eyebrow plucking and a one-night stand with a hair straightener). Instead of participating in this destructive, done-to-death stereotype, “Sierra” dives into some more complicated problems of its own.

The movie’s beginning seems genuinely sweet, with a naked Sierra looking into the bathroom mirror and telling herself, “you are a magnificent beast.”  Her self-confidence seems to stretch far, as she’s content with fighting her own battles and sticking up for herself. But, apparently, it’s not enough, because when she’s texted by the mysterious Jamey (who believes she’s a popular cheerleader, Veronica), she refuses to tell him the truth and proceeds to catfish him up until the last 20 minutes of the film. Sierra befriends Veronica and they work together to trick Jamey into loving Sierra’s personality, but Veronica’s face. The poor fellow is none the wiser even when Veronica goes on a date with him (with a completely different voice, by the way), tells him to close his eyes, and Sierra sneaks out from under his car and kisses him.

Not only that, but she pretends to be disabled to avoid speaking to Jamey when she sees him in person, and is shocked when Jamey’s deaf younger brother tries to communicate with her in American Sign Language. Sierra may be a straight-A student, but she’s ripe with insensitivity and personal motives that destroy her character. In short, Sierra Burgess is not a loser. She is, at best, a creep and a guilt-tripper.

Similar to “Insatiable”, “Sierra Burgess is a Loser” also uses the LGBTQ+ community as a type of joke when her peers laugh about the prospect of Sierra being gay or transgender, which she isn’t. She endures this primarily because she’s never had a boyfriend and she wears clothing that isn’t well-fitted or chic. There’s no actual representation in the movie either and there’s no mention of any queer characters or even a club at school.

Netflix has done an excellent job of making another cinematic duo for the same audience it always has: bullied, straight white teen girls. By introducing us to Sierra and Patty with loving terms and sympathetic gestures, these teenage viewers are more likely to heavily relate to one or the other and potentially take after them in their harmful mannerisms.

Sierra and Patty were created to be beacons for the underdogs, but these missions have only wreaked more havoc on their targeted demographics with the depiction of backstabbing, upsetting, and cruel actions. The insecurity and hopelessness of teenage girls is a vicious cycle in society — so vicious, not even a twisted Netflix commentary could rectify it. 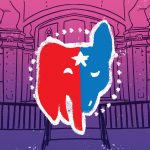 Saturday Night Live in the Age of Trump 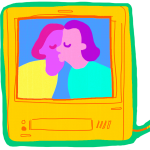