At a time when we need to be reminded that Black Lives Matter, when suicide is the leading cause of death among LGBT youth, when income inequality is at an all-time high, when over 50 percent of inmates in federal prison are incarcerated for drug offenses, and when over 90 percent of homicides are committed by men,  “Moonlight” came to us like a gift. 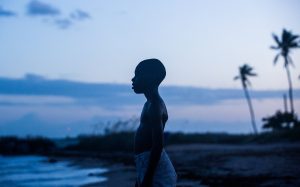 If you like “Moonlight,” then read “Virgil” by Steve Orlando, J.D. Faith, Chris Beckett, and Thomas Mauer.

“Virgil” takes up many of the same questions as “Moonlight,” but runs off in a drastically different direction. Inspired by blaxploitation cinema and Quentin Tarantino films, Orlando imagined “Virgil” as “Django Unchained” “if Tarantino had real balls instead of safe balls.” 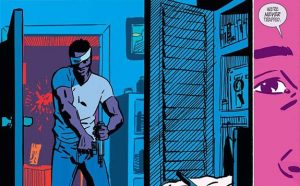 Described as “a queersploitation revenge tale,” “Virgil” tells the story of a closeted Jamaican cop who punches, stabs, and shoots his way through Kingston to unmask the gang that killed his friends and kidnapped his partner. What follows is a gruesome, unflinching examination of queer masculinity in a country where “police, schools, and hospitals discriminate against LGBT people.”

On the first page, we see Virgil in uniform, roughing up a drug dealer with the same confidence and swagger that we see Chiron commanding his ring in act three of “Moonlight.” This is a man whose status hangs precariously from the closet door.

Unlike Chiron, Virgil is out to his friends and has a thriving life in the queer Kingston underground. The stakes, however, are even higher. When a group of masked thugs kick through Virgil’s door, they leave bodies on the floor. Virgil awakens bloodied on the beach – the thematic inversion of “Moonlight’s” seaside romance – and speaks aloud the names of his murdered friends, a moment which poignantly invokes the Black Lives Matter maxim, “Say their names.”

“Virgil’s” violence is off-putting not only for its gore, but for its morality. When Virgil pulls the trigger, are we on his side? How much has a culture of hetero-masculinity and police brutality cultivated Virgil’s violent tendencies? Or is it just that we’re not used to seeing a gay man with a smoking gun? 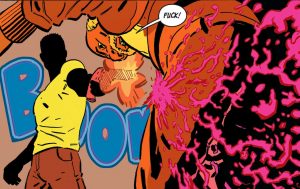 Orlando is a veteran writer who recently penned DC’s only titular gay male superhero, “Midnighter,” and who is currently at work on “Supergirl” and “Midnighter and Apollo.” His knack for snappy dialogue and breakneck pacing combines with a few beautiful moments of true tenderness. When asked about “Virgil’s” elegant sex scenes, Orlando replied, “If this were a straight comic, I wouldn’t be asked that question.”

Paired with Chris Beckett’s explosive neon colors, Faith’s heavy line work and neo-noir compositions are “Virgil’s” pounding engine. Once this book starts, it doesn’t stop. Though “Virgil” is long enough and complex enough to sustain multiple sittings, it’s hard not to read “Virgil” in one.

You can catch “Moonlight” this Wednesday or Thursday at the Logan Theatre.

if you like then read, Indie Comics, jd faith, Moonlight, Steve Orlando, Virgil

Entertainment If You Like Then Read: ‘Moonlight’
« Previous Story