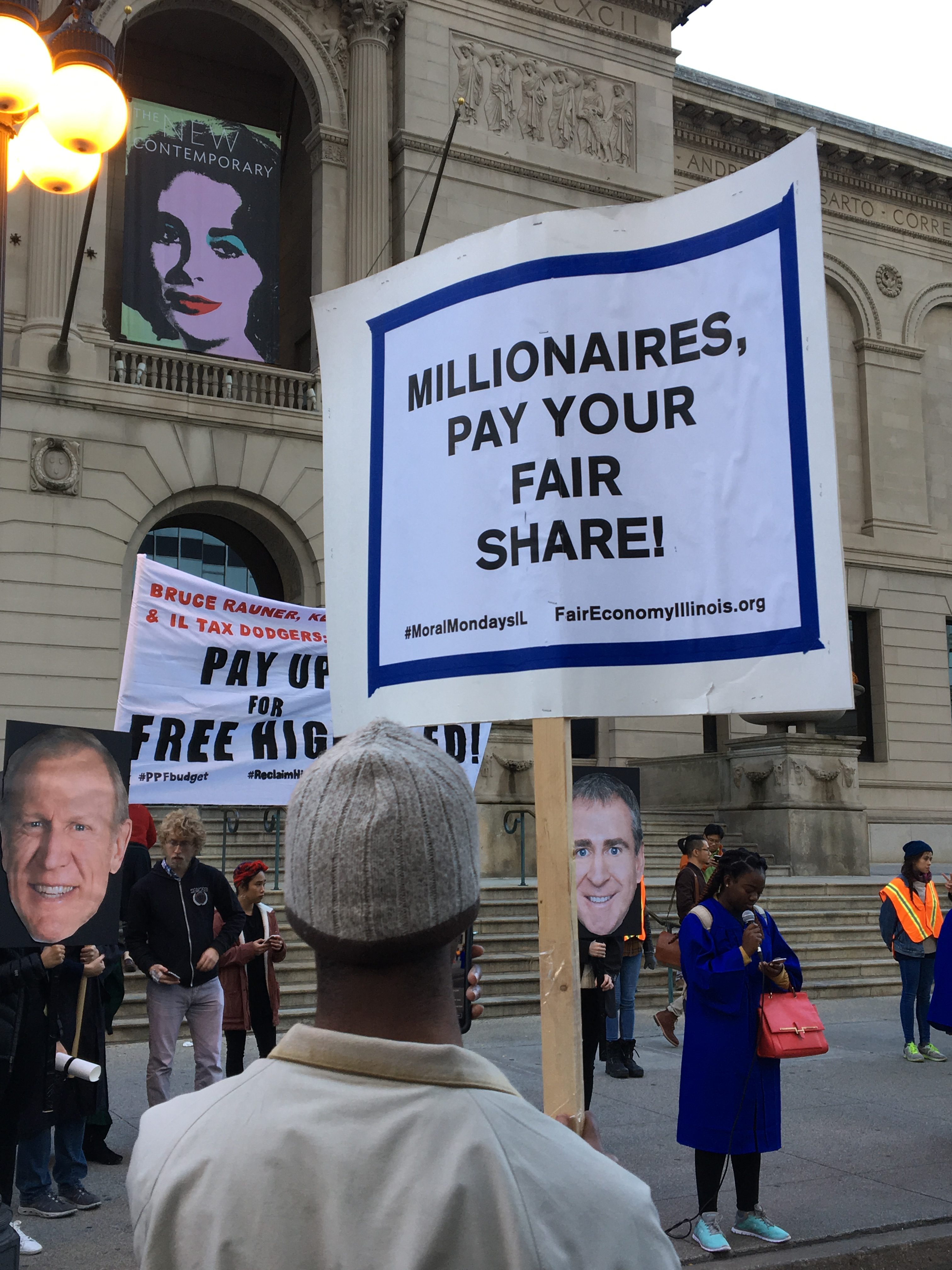 Students from local universities block traffic in front of the Art Institute of Chicago to protest issues around student debt and lack of funding for public universities. Photograph by Samuel Schwindt.

Student protesters marched into the street and blocked traffic in front of the Art Institute of Chicago last Monday. They were there protesting the museum’s wealthy trustee, Ken Griffin, who has been supporting Illinois Governor Bruce Rauner as a budget crisis continues to embroil the state, threatening public universities.

Nathan Stoll, the student body president of Roosevelt University, spoke to F Newsmagazine in an interview at the protest:

Right now, Reclaim Chicago as well as the People’s Lobby USA are working to fight against, or, rather, put some pressure on Ken Griffin, who’s a major donor to Governor Bruce Rauner. I’m here because, as a student who relies on funding of education within the state, I need Bruce Rauner to stop using students, college students specifically, as pawns in some political game.

Some of the protesters, who were in graduation regalia and blocking southbound traffic, were arrested.

“I totally get the Nobel committee. Reading books is hard,” tweeted author Gary Shteyngart on October 13, after Bob Dylan won the Nobel Prize in Literature. The Swedish Academy said Dylan was a literary icon for “having created new poetic expressions within the great American song tradition.”

The singer-songwriter waited several weeks to even acknowledge his receipt of the coveted accolade. He told the Telegraph on Saturday that he would “absolutely” go to the ceremony — if he’s available, that is. He also said it was “hard to believe” he won.

Not everyone is pleased with the musician’s latest award. “I’m happy for Bob Dylan,” tweeted author Jodi Picoult on October 13. “#ButDoesThisMeanICanWinAGrammy?”

While cultivating opium is illegal in Afghanistan, the Afghani government has been known to ignore locals growing poppy plants (used to produce the drug). The United Nations Office on Drugs and Crime (UNODC), however, may be begin coming down harder; they reported a 43 percent increase in the production of opium in the past year.

Opium is the main ingredient in heroin, but is also used medicinally in drugs such as morphine. In Afghanistan, it is more prevalent in the illicit drug market.

The Taliban taxes the production of opium, and it is a major source of income for its governing and military pursuits. it also provides income for poor farming communities. A farmer told BBC correspondent Justin Rowlatt the government has known about his cultivation, but that they know “it is the only way anyone can make decent money.” 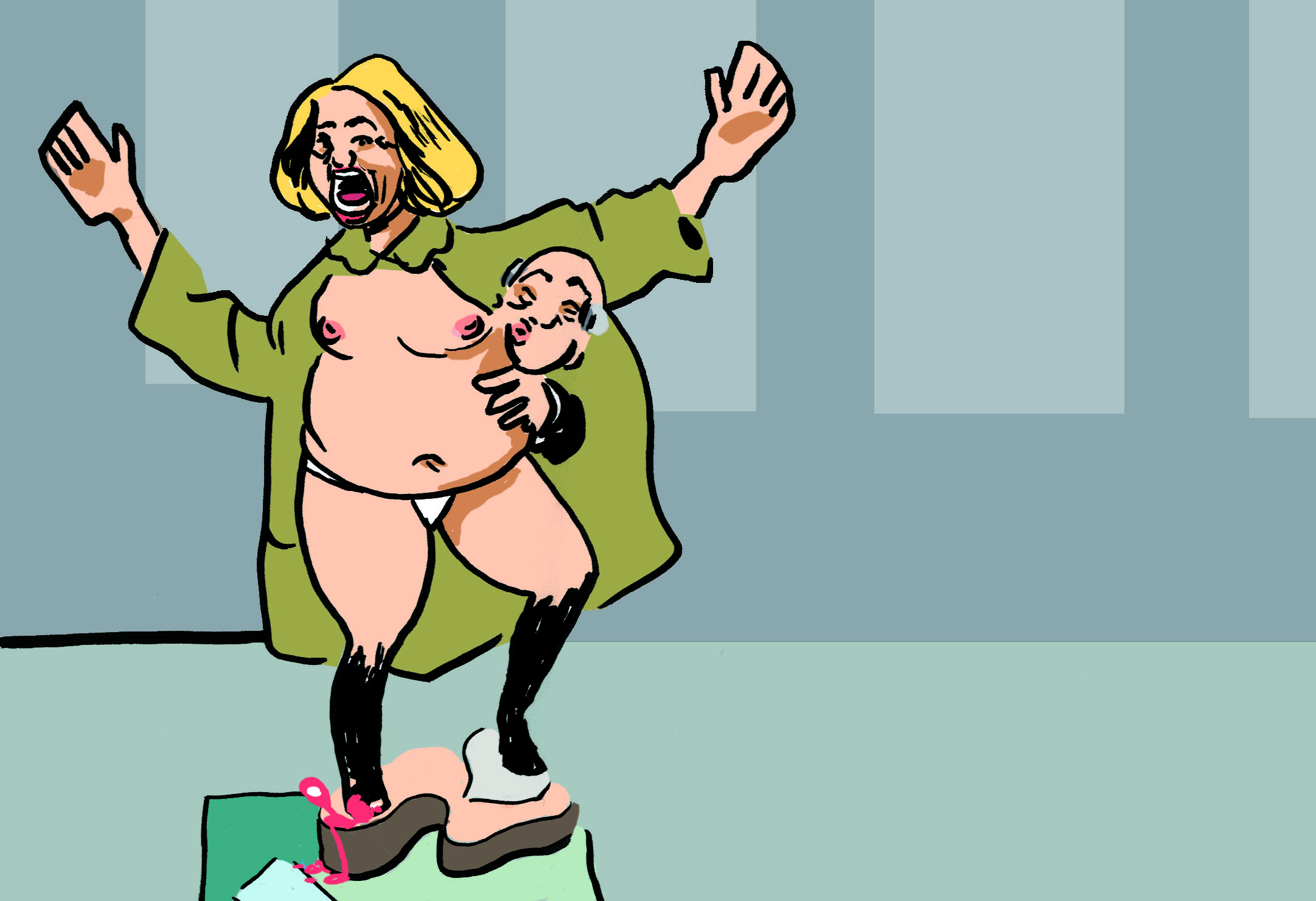 A fight erupted over a half-naked and hoofed rendering of the Democratic nominee for US president. The sculpture appeared last Tuesday in the Bowling Green Neighborhood of New York City.

The judge on the “Bridgegate” case in New Jersey pushed back closing arguments to Friday morning, and the case is now expected to extend into next week. The defendants in the case are Bill Baroni, former deputy executive director of the Port Authority of New York and New Jersey, and Bridget Kelly, Governor Chris Christie’s former deputy chief of staff. They’re accused of deliberately closing lanes on the George Washington Bridge in New Jersey to punish a local mayor who refused to support Christie’s re-election campaign in 2013.

Assistant U.S. Attorney Lee Cortes called the scheme “cruel and callous,” but added that what made it unlawful was the misuse of government resources. Christie has denied involvement in the lane closures, although Baroni and Kelly testified that the governor knew of the closures. The scheme stranded school buses for hours, and prevented first responders from reaching a hospital.

A study published in Current Biology concluded that lifting the global ban on the ivory trade wouldn’t help elephants. Supporters of the controversial idea believe it will slow the poaching of the ivory-tusked African animals, and provide a monetary incentive for preservation. The study found, however, that the global demand for ivory would quickly outrun the growth and reproduction rates of African elephants.

It’s estimated that 100 elephants are killed each day for their ivory. 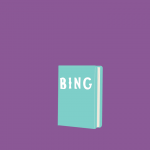 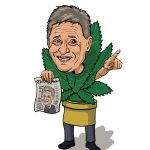