‘I wanted to be on the cover of a sci-fi book’: Juliana Huxtable’s talk at SAIC

Existing at the crossroads of performance, art, and radical identity politics, Juliana Huxtable is an artist for our time. 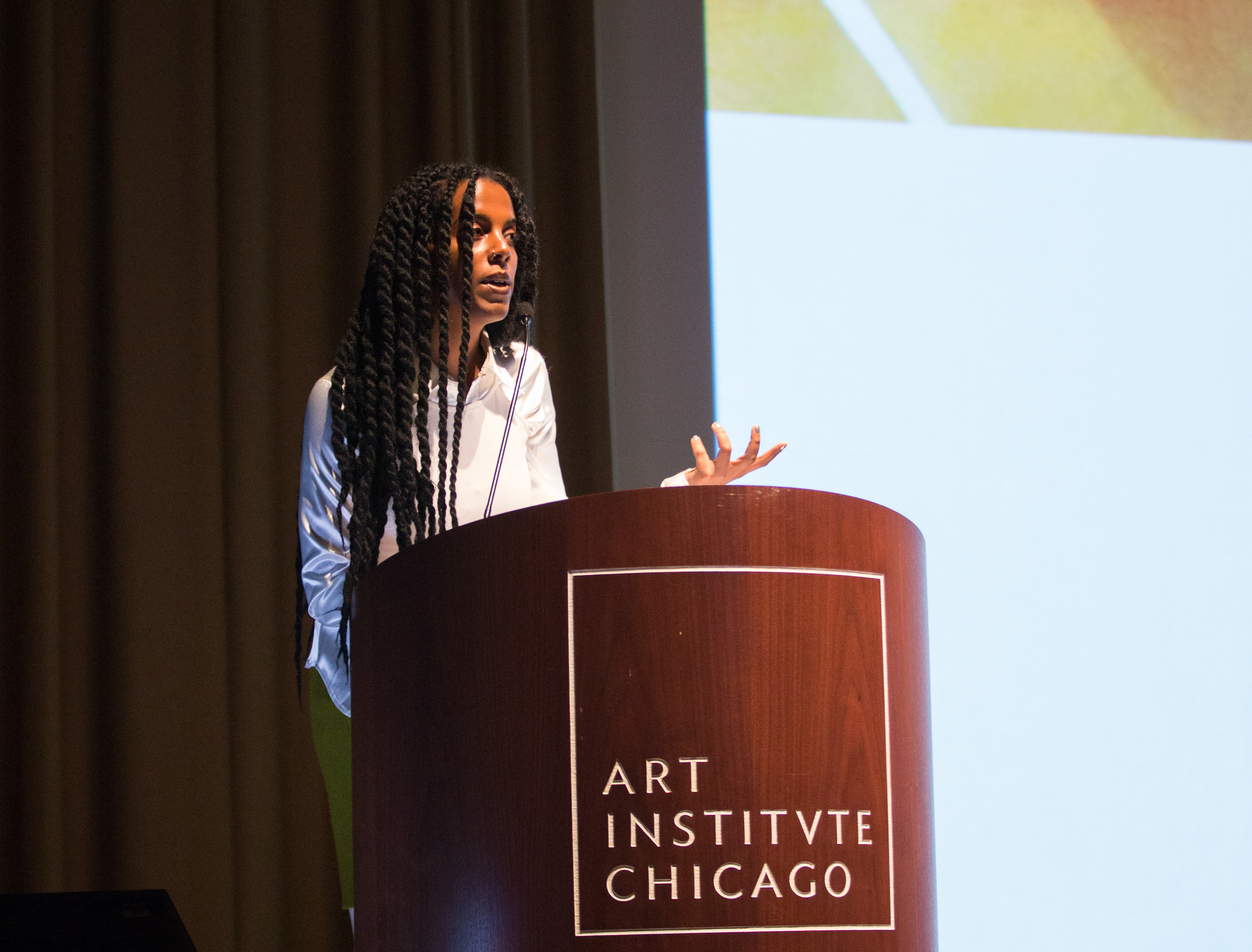 Photograph courtesy of Farah Alhaidar and the School of the Art Institute of Chicago.

Juliana Huxtable is a true phenomenon: She is a representation of what cool ’80s babies have to offer our world. After making appearances as a DJ in New York City’s nightlife scene, Huxtable began sharing paintings, video performances, and diary entries-turned-elaborate-text-centric prints on her Tumblr blog. Social media quickly became the best way for her to present her art.

There is no preferred medium in Huxtable’s creative process; she uses sound, video, text, performance and painting to explore the interchanges of race, gender, sexuality and identity. Her artwork has been shown at MoMA PS1, the Whitney Museum of American Art, Frieze Projects, and the 2015 Triennial: Surround Audience at the New Museum of Contemporary Art.

On October 11, Huxtable spoke with School of the Art Institute of Chicago (SAIC) students in the Rubloff Auditorium. Huxtable, who is black and identifies as queer, was greeted with promising applause as she swung her lengthy braids to the right of her shoulder and prepared for the next hour and a half. She began by describing her influences from childhood: a strong Southern Baptist background, a technologically-advanced household, and social exclusion due to her intersex biology.

“I thought of surgery to make myself a boy. I would get called all these vulgar names in high school,” Huxtable told the audience. Social media was a means of escape; she and a high school friend created goth alter-egos to be uploaded on their social media platforms.

After high school — because the idea of making money from art was absurd to her family — Huxtable told her mother she was going to school at New York City’s Bard College for political science. Instead, she studied gender, human rights, and art. Bard College was not equipped for Huxtable’s talent: “They told me I was trapped in my identity and obsessed with technique,” Huxtable said. “I went to pretend to be a legal assistant.”

Upon discovering a new job in NYC, Huxtable found liberation in the city’s queer nightlife. She told the audience that the act of going out (choosing outfits, applying make-up, taking selfies) was a practice of performance, and her outfits would serve as muses in later performance pieces.

Her response to intentional dressing up was “UNTITLED IN THE RAGE (NIBIRU CATACLYSM)” (2015) and “UNTITLED IN THE RAGE (PSYCHOSOCIAL ‘STUNTIN’)” (2015), a series of pieces inspired by the African American religious cult Nuwaubian Nation. By putting herself in historical pop culture images, Huxtable imagines an afro-futuristic world. “There was power in the big hoop earrings and men’s camouflage gear that I would see black girls wearing. This militant black girl image is what I wanted to play with,” Huxtable told the audience as she clicked to a slide of herself in a purple skin and military boots posed on top of a sci-fi ravine scene.

Science fiction is also a big inspiration for Huxtable. Throughout the talk, author Octavia Butler was named in reference to Huxtable’s creative process. In many of her pieces, she aims to abstract black liberation into a sci-fi setting. “Science fiction,” Huxtable said, “is an alternative to theology.”

She reminded the audience of the album covers and music videos of TLC and Aaliyah that depicted a sort of afro-futurism that also channelled into political inclinations. Her piece, “UNTITLED IN THE RAGE (NIBIRU CATACLYSM),” reflects the subtle black liberation ideologies of common black household art depicting a Jesus that resembles Tupac. “I wanted to be on the cover of a sci-fi book … and it worked,” Huxtable told the audience.

“For a lack of a better word,” Huxtable describes the primary aesthetic of her art as “kitschy.” Analyzing pop culture icons via internet databases lets Huxtable over-identify the black diaspora. Technology is not only used to distort her voice in sound performances, but also to re-discover what was thought to be forgotten. In her research process, she accesses “lost” history through broken web links.  The process of finding old history — the information not found in textbooks — through new databases can be observed in  “THERE ARE CERTAIN FACTS THAT CANNOT BE DISPUTED” (2015), a three-part performance featuring human evolution, global colonization, and a South African healer.

By using new media to “over-identify” herself, Huxtable has widened the art world to accommodate a black artist of queer identification. Artist Frank Benson sculpted a nude, regally positioned Huxtable that was presented at the New Museum Triennial. The sculpture, titled, “Juliana,” seems to be in reference to the ancient “Sleeping Hermaphraditus” which has an androgynous appearance. With her direct body, Huxtable challenges normal ideas of bodies, femininity, and representation, and she coerces the art world to catch up.

Arts & Culture ‘I wanted to be on the cover of a sci-fi book’: Juliana Huxtable’s talk at...
« Previous Story 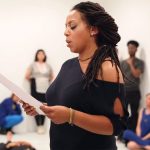 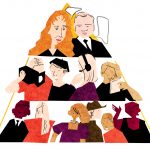