“Dog Night” was an experience of immersive, spooky theater that had everything — including dog masks.

On the walk back to my apartment after “Dog Night” at the historic Gunder Mansion, I sent this one-sentence review to a friend: “Perfect amount of spooky-scary, only made me jump a couple of times.”

For me — a person flying solo for a night of “immersive theatrical haunting” — this was very high praise; but while concise and accurate, my text message review does little to fully describe the experience of “Dog Night.”

The story of “Dog Night,” which was put on by the theater group Rabid Bat Theatricals (RBT), revolves around the mansion itself. RBT’s team, made up of “a playwright, a pair of clown performers, two ritual artists, a storyteller, and a choreographer,” has created a set of experiences for audience members to explore and interact with in a choose-your-own-adventure style. At the beginning of the night, the audience is asked to don dog masks and name tags — a seemingly contradictory combination of anonymity and identification. The “performer-curators” join the audience in establishing the backstory to set up the night to come. Almost immediately, someone gets possessed and the night unfolds however each audience member chooses from there.

Ned Baker, one of the coordinators of the show, said his hope for “Dog Night” was “to allow participants to make their own individual experience, seek out and create the chills or adventure that excites them.” It does just that. The many rooms of the mansion have concurrent, creepy performances of all sorts. “Dog Night” combines the genres of mystery and horror to attain maximum audience participation; in other words, if a certain audience member isn’t a fan of a certain room, they can choose to look for clues around the mansion instead of observing or participating in the horror-oriented performances. In any given room, I was with a different set of audience members, each experiencing the night by their own accord and participating to differing degrees.

Watching other members of the audience as they chose how, when, and whether to participate was almost as captivating as watching the performers themselves. Some maintained the observational etiquette found in a traditional theater between performers and the audience. Others’ participation rivaled that of the performers themselves. Still, some observed no known code of etiquette at all; I witnessed one interaction I am convinced I could never see under any other circumstances between a performer and audience member, nor two people in any type of relationship.

In addition to the mesmerizing performances by audience members, the expected performances in each room created a fictional history of the mansion that was compelling and just the right amount of scary to set the mood for October. Each had a unique take on the theme, and none disappointed. Separately, they were all riveting; together, they created what can only be described as a symphony. At one particular moment of my night, as I watched “Glimpse” (a dance piece choreographed by Liz Conway in collaboration with the dancers, Zach Bird and Early Whitehead), I could hear performances happening down the hall over and under the dancers’ music and movement. The effect was chilling; the dancers continued as if the turmoil of the other rooms didn’t exist except for in the audience’s minds.

This is just one example of the way the pieces worked in harmony (and cacophony) to create a memorable night. However, for when the performances get too intense, the mystery storyline of “Dog Night” also exists outside of the horror-story rooms. One character asks audience members to look for clues throughout the mansion while performances take place. Many audience members on the night I saw the performance chose this route with gusto, taking provided pictures and searching for their contents within the rooms. Although this didn’t shield a person entirely from the happenings within many of the rooms, it did provide a somewhat distancing alternative path.

“Dog Night” is highly ambitious and succeeds in every way. It poses all the right questions about the nature and role of the audience in performance while delivering vignettes that won’t be easily forgotten. Its subject matter works well for anyone trying to get into that spooky autumn mood. However you choose to experience it, “Dog Night” provides you with an experience unlike any other in Chicago. 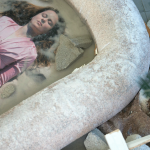 ‘Affreightments’ at Gunder Rocks the Boat (In a Good... 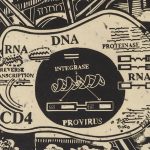 ‘Keeping the Shadow’ of the AIDS Crisis at the...