Local favorites the Neo-Futurists host a “micro-festival” that’s not small at all. 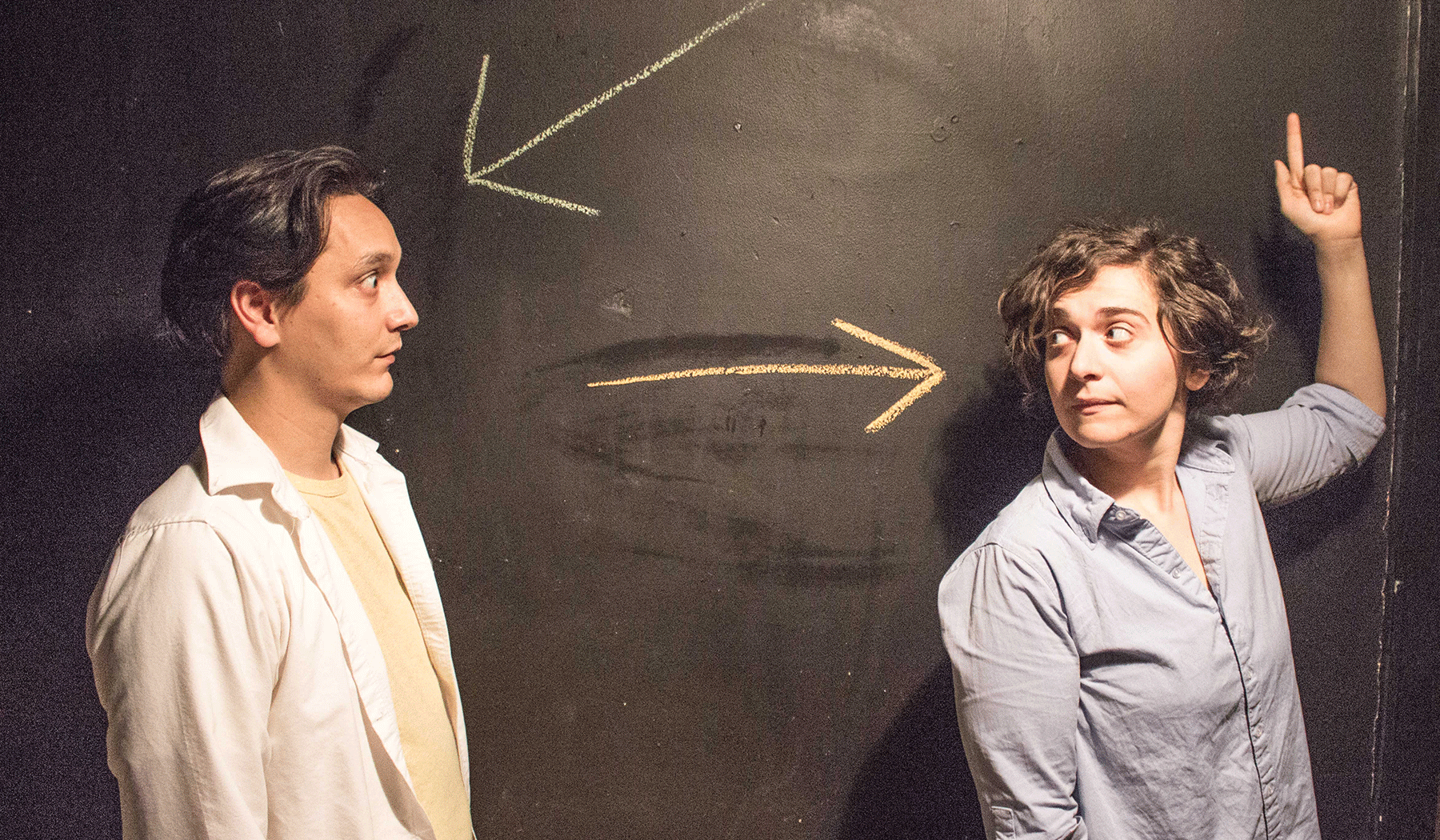 Kurt Chiang and Lily Mooney in “The Arrow.” Photograph courtesy of the Neo-Futurist Theatre Company.

Tourists this weekend are buying tickets for “Book of Mormon” and “Schoolhouse Rock Live!,” but if you’re local, you know that real-deal Chicago theater lives outside the Loop. This weekend, it’s going nuts in a tiny kitchen on Ashland and Foster.

The Neo-Futurists Kitchen “Micro-Festival” is a three-day celebration of the weird, fascinating, whip-smart, and often filthy-dirty (in mind and physical filth) theater and performance art the Neos are known for, and this time, they’ve brought friends.

With over a dozen performances and workshops in association with Barrel of Monkeys, Write Club, The Annoyance, L.A.-import performance art collective Wet the Hippo, Walkabout Theater Company and others, this first-ever festival is a must-attend for fans of the Neos and those who have yet to get acquainted with one of the longest-standing and most-beloved companies in the city.

FNews sat down with Neo Artistic Director Kurt Chiang to talk about the Kitchen and how the Neos are approaching their art and artistic collaborations these days.

FNEWS: What’s the vision for The Kitchen Festival and when did the idea come up?

KURT: The Neo-Futurist ensemble holds what we call a Prime-Time Salon at the beginning of each year. That’s where we pitch ideas for our creative projects outside the realm of our flagship show, “Too Much Light Makes the Baby Go Blind” (TML). In the winter of 2015, there were two pitches that required long-term processes which were different from the usual 10-week rehearsal process typically dedicated for Prime-Time show development.

These two projects [Tif Harrison’s “Saturn Returns” and Chiang and Lily Mooney’s “The Arrow”] inspired questions toward our working practice and how that practice relates to other undefinable theater and art groups throughout the city. We wanted to open our doors to those companies that have a certain shared tone of performance.

And so a small festival was born where we would invite certain groups throughout Chicago — and one from LA — and have them put on their stuff for a weekend, along with a workshop performance of “Saturn” and the final quarterly performance of “The Arrow.”

FNEWS: The Neos collaborate with plenty of outside artists within the Prime-Time shows. But you’ve never done a “come play with us” fest before. Why now, and why is the Kitchen concept the way to do it?

KURT: The influence of our aesthetic runs throughout the world. But I think it’s important to name that it is a way of doing theater that suits the city of Chicago particularly well. That “way” of doing theater speaks to a Chicago audience, and I think that the long term success of our work is in debt to what those audiences inherently expect and demand when they come to see us.

It seems like it’s been too long since we shared this commonality with other artists. And we have the luxury of a building that we can share; having the space is a huge reason to host this festival.

FNEWS: Tell me about the L.A. group coming in.

Wet The Hippo is a collective of artists that is born out of the teachings of a singular and extraordinary performer named John Gilkey, who has performed in Cirque du Soleil. He is a clown and an improviser, and a few years ago he made a school in LA where he taught “Idiot” workshops. These workshops are a mix of clown training as well as performance philosophies he’s played with and honed.

Tim Reid, a Neo-Alum, came across them when he moved out there and became part of a show that was originally named Wet the Hippo. It happened weekly in LA and the cast developed an ensemble. Now, the company puts on other shows, and continue to teach classes, and this show that is coming to The Kitchen is “The Simple Simples.”

So the connection of having them come to the festival had to do with Tim, obviously, but also they work as a clown-ish and devising group that shares a lot of common values that we and these other Chicago-based companies hold. It’s a show that seems like it would really benefit from a Chicago crowd. “Hippo” does well in LA; there is a following. But I think it’s valuable that they come here and get some love from an audience base that I think will receive them with a ton of excitement.

FNEWS: Tell me how to attend the festival; there are a few ways to do it, right?

A five-day pass gives you an all access ticket to everything we are putting up. That includes feature shows like “The Simple Simples,” “Wet the Hippo,” Neo’s “Saturn Returns” and “The Arrow,” as well as all the talks and workshops and salon performances. If you are planning to come to two of those featured shows, it just makes sense to grab a pass and check out one of the smaller performances that are peppered throughout, if not three or five of them!

The one-day weekend pass is for anyone particular interested in spending their day here, and are excited about a full day of seeing good stuff, for really cheap. For $20, on Saturday you can conceivably see Barrel of Monkeys in conversation with the Neos, engage in a conversation on gender with The Inconvenience, sit-in on a luncheon with artists hosted by the League of Chicago Theaters, take a workshop in vogue dance, and see Back Room Shakespeare perform. And there’s free beer.

Sunday, you’ve got a physical workshop with Walkabout, a new-music concert with Parlour Tapes+, and a performance of Write Club, capped off with a performance of “The Arrow.” And also, everything is available as a single ticket. If you buy a ticket to “Saturn Returns” on Thursday, you are getting three performances, free beer and food: opening reception, “Saturn Returns,” and an after-party with JRV Majesty solo performers.

The Idiot Workshop with John Gilkey has only a few slots left! Jump on it! The other workshops – Vogue with Damon Green / TEXTUREDance, Walkabout, and Parlour Tapes+ – have walk up availability, and are also one-day and one-day pass available.

FNEWS: Is regular TML going on next weekend?

KURT: TML is scheduled as usual. In fact, Friday night’s TML is part of the festival. So if you have a five-day pass, you can see TML that night for no extra cost.

FNEWS: Now the really tough question: what acts or workshops are you especially excited about?

Having Wet the Hippo come here is huge, as we are not an organization that always brings out-of-town guests to tour. Back Room Shakespeare is the first group that we got, based on a very similar shared philosophy of creating audience-driven live events, and one of their ring-leaders, Samuel Taylor, has been so supportive toward the idea of creating a festival of aesthetics like this.

The vogue workshop of Damon Green is some badass dance — something we never have in here, and it’s just the best.

And Holy Fuck Comedy Hour from The Annoyance are a rag-tag group of insane comedy thinkers and doers, and there wouldn’t be any reason to have them here outside of this festival, so that is vital. And then our own stuff, obviously. It’s all purposefully and hand-picked. Nothing is here to be a placeholder.

barrell of monkeys, chicago, comedy, experimental, festivals, improv, kitchen, live, micro-festival, neofuturists, out and about, the annoyance, Theatre, too much light, write club

Arts & Culture The Kitchen “Micro-Festival”: A Conversation With A Neo-Futurist
« Previous Story 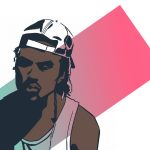 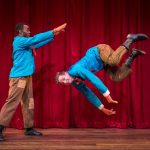