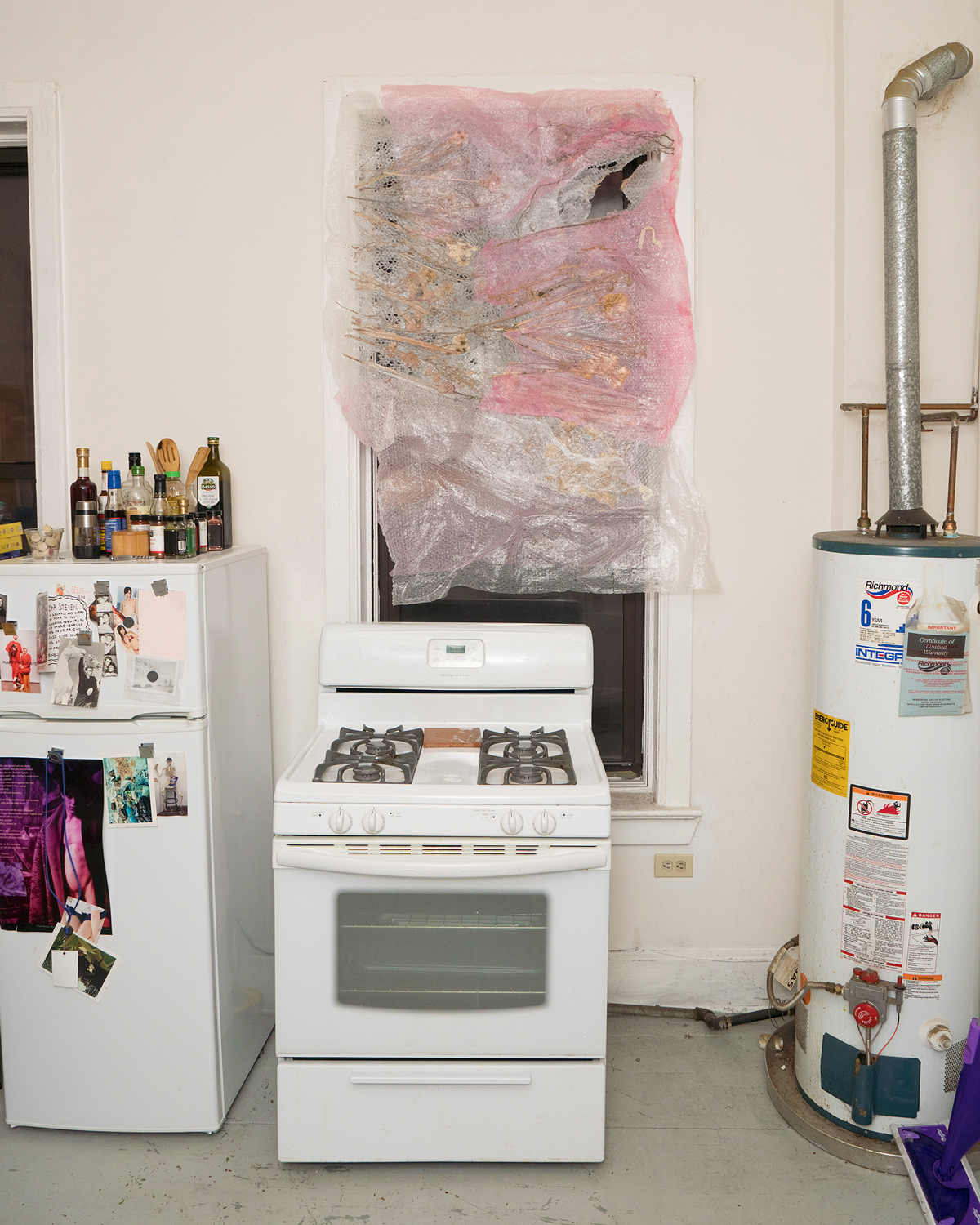 The new exhibition “Surface Layers” takes inspiration from the “surface layer of water molecules: threshold between air and water, something to be skimmed or penetrated.” Curated by Veronica Sines, the show features the work of Jaclyn Mednicov (MFA Painting), Jenn Smith (MFA Painting), and Sammi Skolmoski (MFA Writing). “Surface Layers” opened recently at SAMUEL, a space hosted by Steven Vainberg.

Jaclyn Mednicov’s “Flowers (bubble wrap)” features ripped bubble wrap decorated with dead wildflowers and brushed with pink paint, nailed up over a window above the stove. The piece catches light differently throughout the day, altering its effect.

“Flowers in cement (I)” and “Flowers in cement (II)” include haphazard remnants of flowers, frozen in cement. “Sheetrock (remnant)” made of drywall, alka-seltzer, gel medium, paper, and dried flowers, presents a chaotic rush of color and line; Mednicov smears summery colors thickly and seemingly at random across the object, interspersed with markings that resemble fossil prints.

Mednicov’s practice of photographing memorials carved into the cement pathway of the lakefront informs her painting. “I just found I was doing this repetitive thing with the types of photos I would take: It’s always of residue, or a type of memorial. I’m interested in how people mark a memory, maybe somebody who’s died or just a moment that they’ve experienced with someone else. And I’m curious what that need is to make your mark in pavement, to hold a moment in time.” 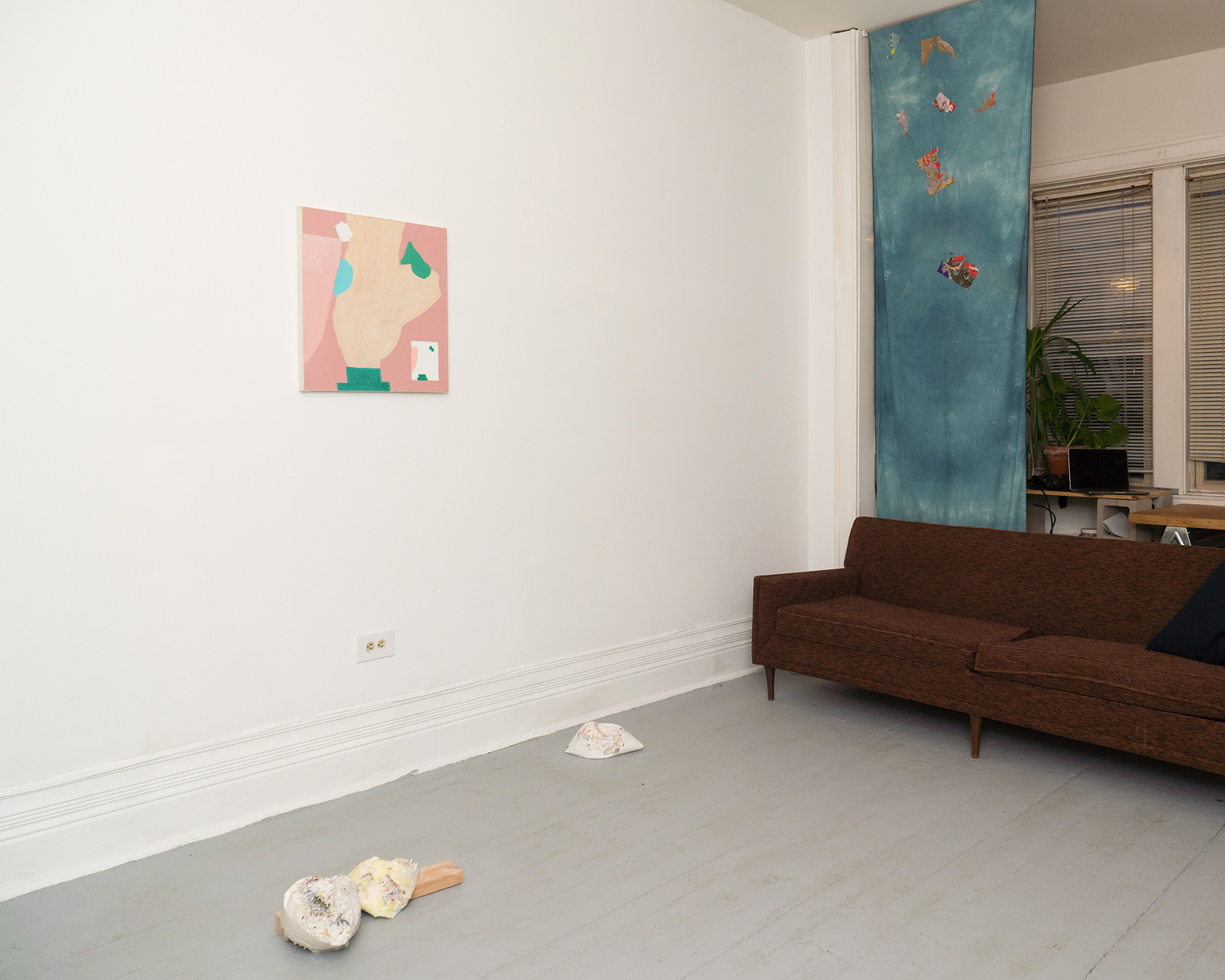 “Surface Layers” features two works by Sammi Skolmoski: “Monolith of Sorted Turfs,” a long blue tapestry featuring geographic-looking fragments of color; and “Soiled,” a piece made of muslin, dye, embroidery thread, and plastic letters. The show’s program also features text works Skolmoski made by arranging words on a felt letter board. Enigmatic phrases like “STEREO MECHANICS FOR A VELVET BODY” and “WHEN A TERRA COTTA POT IS A WOMB” pop out against a black background.

Skolmoski uses digital embroidery machines to introduce an element of unaccountability into her work. The artist explained, “In my writing and in my visual work, I feel like whenever you’re operating within strange territory, you have to provide each piece with its own logic; so if someone wants to ask a question about it, you theoretically could find it within the piece. For me, works a lot of the time are based in process, and a lot of process then becomes based on trying to figure out where I can tuck accountability into the piece. A way that I figured out I could do that was in working with machines.”

Skolmoski continued, “It seems to be a trend, especially in academia, where impulse is not considered intelligent, and you’re constantly having to prove why it’s okay to be working from a place of impulse or intuition. I hope that changes, but for now it’s just fun to try to think of ways that I can get away with it.” 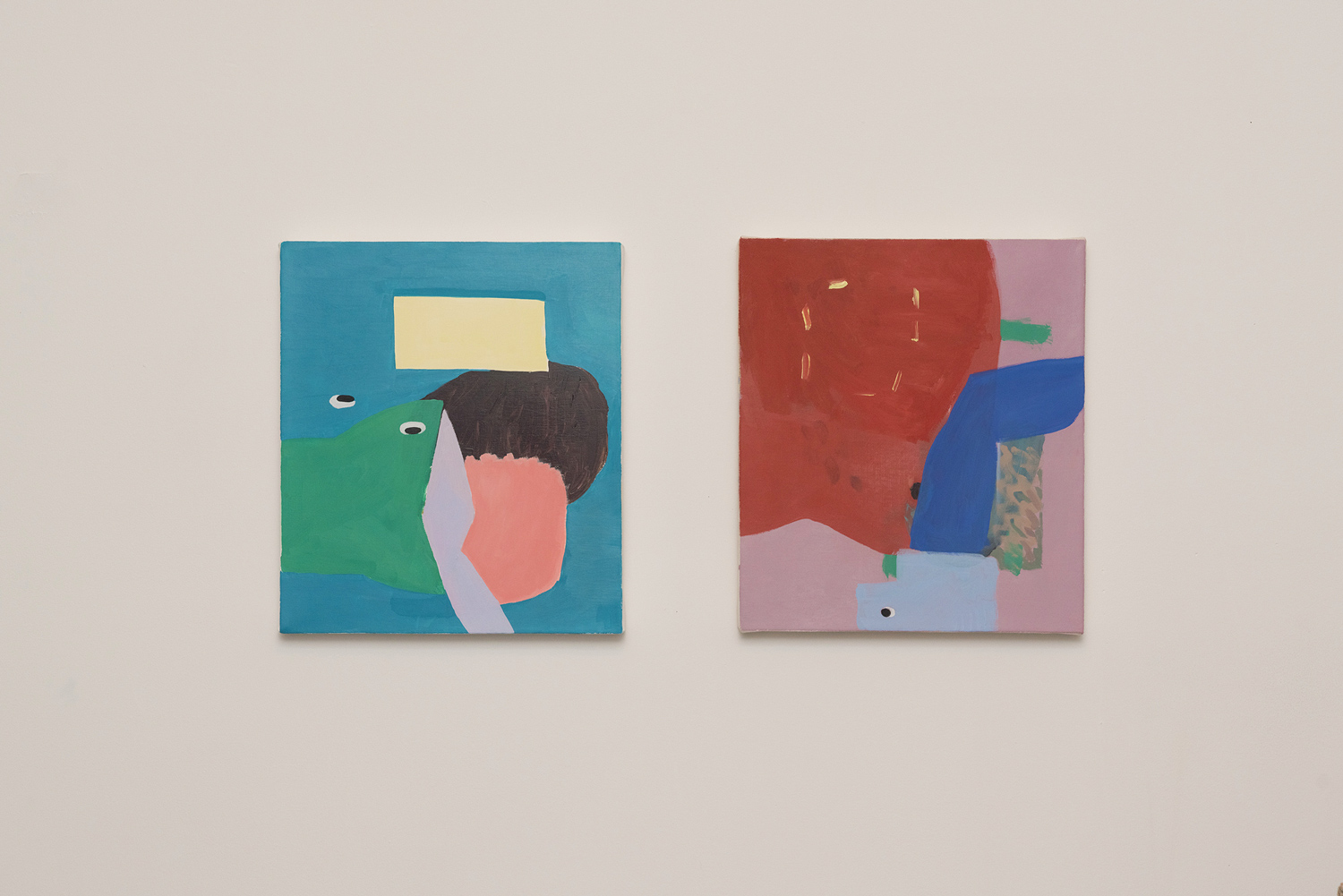 A variety of media influences Smith’s artmaking, from outsider artists to evangelical Christian entertainment, references she collects on her Instagram. “I’m often gathering images of what I call Christian Edutainment, because I grew up really hardcore Evangelical Christian and I’m interested in all of the TV shows and video games and educational workbooks and things that are geared toward children who are being raised in that subset of Christianity,” she said.

Sines, the show’s curator, said, “Jenn, Sammi, and Jaclyn are all working with these conceptual ideas that can either be discussed more thoroughly, or can just be appreciated in the artwork itself, for their formal qualities.” In the unexpected space of the apartment gallery, their works express comfort with modes that are in-between. 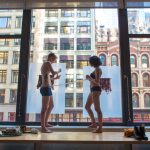 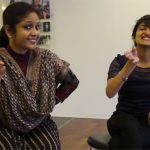