How do we even begin to move on from the death of David Bowie? There is a gaping wound in the collective rock ‘n’ roll consciousness, our ambassador is gone, and the world seems to feel a little different today. He has gone out in a trail of mystery, in the echoes of one last album, a swan song of sorts. I cannot, for one, say that I would want any other goodbye. He has left us a legacy that is both fulfilled and complicated, so much so that I feel certain this is not goodbye to David Bowie, not for us, not to his music. So in honor of Ziggy Stardust, Major Tom, Halloween Jack, and the other faces of Bowie, here are my top ten tracks in no particular order, some obvious and others less so — and these are just one tiny slice of an illustrious sprawl of a career. Let’s dust off some gems from the glam depths and let all the children boogie.

Hear me out on this one. “Lodger” deserves more love and recognition than it gets. It’s my theory that to those few younger fans who have heard it, it often falls categorically into a sort of later-Bowie bin, paling in comparison to some of his earlier work. Sure, it lacks the cohesive spark of “Hunky Dory” and “Ziggy Stardust,” However, there are a number of great tracks on “Lodger” that have unduly fallen by the wayside. “Look Back in Anger” is the best of these, explosively energetic, with a refreshing change from the dead-pan vocals of Bowie’s new wave period. By contrast, the vocals in this song are soaring and dramatic, breaking in waves of pathos against the driving rhythm. Give it a chance; it will surprise you.

This one, on the other hand, should come as no surprise. It’s such a simple song, but so impactful. It’s hard to pin down exactly why this song is so damn great; ultimately, I think it comes down to the fact that everything David Bowie did he did better than everyone else. In this song he tips his hat to sleazy blues rock, effortlessly mocking the trudging style of the Velvet Underground, but his sense of humor strikes gold because “Jean Genie” is almost frustratingly brilliant, a lazy sprawl of a song contained within a surprisingly tight foot-stomping framework. This song is just one example of Bowie’s uncanny awareness of structure. The song’s ending, with its building to a thudding and sudden stop, is nothing short of perfect.

3. “Suffragette City” from “The Rise and Fall of Ziggy Stardust and the Spiders From Mars”

This song introduced me to rock ‘n’ roll, plain and simple. Structurally, it’s pretty normal — especially when compared to the rock operatic nature of the rest of the album. Not much changes musically, but man, does this song have energy. It seems almost incongruous with the rest of the album, propelled by a driving, rollicking bass line, remaining mostly in the form of a standard verse/chorus rock song. The formula may be simple, but the song stands out because of some unusual components. The intro reoccurs several times throughout the song, and it is almost more important than the ever-catchy chorus, building tension and culminating in the infectious chant: “Wham bam, thank you ma’am!” Similarly, the lazy background call of “Hey man!” is the surprising hook of the song, and it’s so much fun to sing along to. This is the Bowie of the everyman.

This song is probably the epicenter of Bowie’s space craze. The concept sounds silly and melodramatic, as do a lot of Bowie songs when described in brief. An astronaut is stranded after his mission goes awry, out of contact with earth, adrift in outer space. But it touches on a raw nerve of poignancy, mostly contained in Bowie’s extraordinarily expressive vocal range. I will never forget the lump in my throat when I first heard the vocals go up an octave in the line, “Ground control to Major Tom, your circuit’s dead, there’s something wrong.” Ground control asks, “Can you hear me, Major Tom?” There’s so much tragedy is expressed in just one line, with one last lingering question.

5. “Ashes to Ashes” from “Scary Monsters”

This song sees the almost postmodern return of Major Tom, a recurring character in Bowie’s songs. Major Tom shows up first as the astronaut of “Space Oddity,” and continues to recur in Bowie’s music, ending with, some say, an ambiguous appearance in “Blackstar” from his most recent album. In “Ashes to Ashes,” however, Bowie tells us that “we know Major Tom’s a junkie, strung out in heaven’s high, hitting an all-time low,” reflecting perhaps on Bowie’s own history of drug abuse. His identification with this astronaut character is fascinating on a number of levels. Outer space is the domain of outsiders in his songs, representing something that the world is not quite ready for yet. This song is lonely in the way that Bowie seems to have imagined space — a sparse synth part echoing slightly above the listener. The facade of Major Tom is thinly veiling, or perhaps just more complicated than I’d realized, and the song seems to be about desolation more allegorical than literal.

6. “Moonage Daydream” from “The Rise and Fall of Ziggy Stardust and the Spiders From Mars”

This song would be great for a lightning round of “name that tune.” The first chord is instantly recognizable, thundering in with unmistakable brashness. If you haven’t gotten it by then, you will as soon as Bowie wails, “I’m an alligator.” What does that even mean, anyway? I’ve never quite figured it out, but that seems somehow beside the point. I would argue that this song is greater and more sonically fulfilling than even the album’s titular track. It’s a song of juxtapositions; heavy, but whimsical. The guitar balances between heavy riffs and gentle strumming; vaudevillian piano and flute solos dance throughout while strings add a sense of gravity. Throw some cosmic-sounding space sounds in and you have a song that believes in itself, but doesn’t take itself too seriously,

This is another well-known track, probably due in part to Nirvana’s 1994 rendition on MTV Unplugged. Its mainstream success really does feel like a triumph, because everything about this song is truly bizarre. It gets weirder every time I listen to it. The guitar riff in the verse is intensely dissonant and dark, coming in and out whenever it pleases, but has a scattered catchiness that I always find myself humming for hours afterward. Everything feels a little off, a little lurching and out of time, and the effect is unsettling in a way that feels poignantly eerie.
Lyrically, the song is like a Percy Shelley poem: obscure, but still evocative.

8. “Soul Love” from “The Rise and Fall of Ziggy Stardust and the Spiders From Mars”

It is so hard not let “Ziggy Stardust” take over this entire list. Every song on it is good, and most are very, very good. I have always had an affinity for “Soul Love.” It is an understated and pensive breath just before the rising action; the calm before the cosmic storm.  I know this song might seem like a bit of a sleeper, but don’t mistake mellowness for tediousness. Beneath the vocal melody, there are so many elements at work; characteristically bizarre back-up vocals, handclaps, and bongo rhythms, all interwoven into pure magic.  Everything is loose, yet so deliberate. It is a wonderfully atmospheric exposition into Ziggy’s world; a moment amidst storytelling to just take some time to feel.

In a 2003 interview, David Bowie told NPR that his initial musical aspirations lay in musicals. It seems that rock ‘n’ roll was a detour that never quite ended. However there is no doubt that his theatrical tendencies were to thank not only for his flair for characters and narrative albums, but also for his opus-like approach to work. “Hunky Dory” is a theatrical album, full of trilling piano and string accompaniments, as similar to a musical as to a rock opera. “Life on Mars” is a great rock song, but it could have just as easily been a Broadway showstopper. The lyrics are dry and sardonic, but the instrumentation swells with emotion, cello building to the momentous crush of the chorus. Bowie’s vocal performance in the chorus is unearthly, every petulant syllable whined out with gut-wrenching emotion, making my hair stand on end every time.

It’s hard not to feel too obvious with this song, but it’s beloved for a reason. This is the anthem of a zeitgeist: “You’ve got your mother in a whirl, she’s not sure if you’re a boy or a girl.” David Bowie wore a lot of hats and played a lot of characters, but he somehow avoided coming off as disingenuous. He started an androgynous revolution, and true to form, moved on from glam rock almost as soon as he’d started it. However, he left the scene with this affectionate summation of glam rock fandom. “Rebel Rebel” is a song not only for the outsiders of the 1970s, but for the weirdos everywhere and in everyone. Hey weirdos, Bowie’s still in your corner. 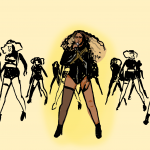