The 2016 Presidential Candidates on Immigration

Hillary Clinton Background Co-sponsored Senator Ted Kennedy’s 2004 bill and supported the Comprehensive Immigration Reform Act; Co-sponsored the DREAM Act in 2003, 2005, and 2007; Sponsored the Legal Immigrant Children’s Health Improvement Act in the Senate; DREAMERs and immigration activists have protested at Clinton’s campaign events for her refusal to distance herself from Obama’s high …

Affordable Care Act (ACA): Often referred to as Obamacare, the 2010 legislation that allowed for the expansion of Medicaid to cover uninsured Americans.

Birthright citizenship: The citizenship guaranteed by the 14th Amendment to anyone born in a country or territory regardless of the citizenship of the parents.

Children’s Health Insurance Program (CHIP): A program of the U.S. Department of Health and Human Services that provides low cost insurance to families with children; in some states coverage may also extend to pregnant women.

Comprehensive Immigration Reform Act: A 2007 bill that would have provided a pathway to citizenship for the millions of undocumented residents in the U.S.

Deferred Action for Childhood Arrivals (DACA): A 2012 policy out of the Obama administration that allowed some people who entered the U.S. as children to obtain a work permit and avoid deportation.

Deferred Action for Parents of American and Lawful Permanent Residents (DAPA): A policy that would provide deferred action to the undocumented parents of children born in the U.S.

Deferred action: An immigration status granted by the executive branch that can delay deportation

Development, Relief, and Education for Alien Minors (DREAM Act): Legislation that provides protection which would permit some immigrant students who have grown up in the U.S. to apply for temporary legal status and to eventually receive legal status and become eligible for U.S. citizenship, if they enlist in the military or attend college. This act also provides some access to in-state tuition rates.

DREAMERs: Refers to the people between the ages of 15 and 30 who meet the requirements of DACA; the young people who grew up in the U.S. and were brought to the country as children. The term has also come to represent the political, economic, and social aspirations of the group.

Diversity Visa: A Visa drawn from random selection and provided to people from regions with low immigration rates to the United States.

Green Card (United States Permanent Resident Card): A document that identifies an immigrant as a lawful resident of the U.S. and allows for employment in the country.

U.S. Immigration Customs Enforcement (ICE): The federal agency out of the U.S. Department of Homeland Security that is responsible for investigating and enforcing border policies; the agency tasked with removal, detention, and deportation of undocumented residents in the U.S.

Medicaid: Federal and state healthcare program for low income families and individuals and some individuals with disabilities; recipients must be citizens of the U.S. or lawfully residing in the country.

Nonimmigrant visa: A document given to people with permanent residence outside the U.S. but who will be in the U.S. for a short period of time for things like tourism, work, etc.

Sanctuary city: A city that does not prosecute undocumented persons living in that city.

Visa: A document that allows temporary entry to a country.
Like News The 2016 Presidential Candidates on Immigration
« Previous Story 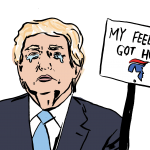