Mulder and Scully might not have been the best FBI agents, but what they lacked in closed cases, they made up with electric sexual tension.

Since the premiere of “The X-Files” in 1993, the names Mulder and Scully have been synonymous with slow-burning sexual tension and enduring partnership in the face of monsters, aliens, and government conspiracies.

The couple departed drastically from previous television detecting duos featuring hapless women and brilliant men (think the model-turned-investigator opposite a young Bruce Willis in “Moonlighting” or MacGyver and his endless rotation of pretty companions in the ’80s). In a remarkable move for early ’90s television, Special Agents Fox Mulder and Dana Scully flipped the script on traditional gender roles: Where Mulder was feeling, intuitive, and driven by his emotions to believe in the unbelievable, Scully was a shoulder-pad-wearing scientist, a medical doctor, reserved, skeptical, and compelled by empirical evidence. Scully was not concerned with marrying or having children. Mulder was far more open with his feelings than his partner. It made for some of the best seasons of television in history.

Since Mulder and Scully are returning to the small screen later this month, it is worth revisiting their relationship and what, precisely, made it so subversive. Because their relationship has been talked to death in think-pieces and endless listicles, I have pulled out three under-appreciated episodes that offer insight into the Mulder/Scully dynamic. You won’t find these three mid-series episodes on any “Best of” lists, but they still offer some great moments.

Mulder’s Past Life Regression in “The Field Where I Died” (Season 4, Episode 5)

“The Field Where I Died” is a woefully neglected episode of “The X-Files.” Its subject matter is more bold than most monster-of-the-week episodes: For forty-five minutes, the show set aside its usual bogeymen to grapple with concept of reincarnation, a real tenet of several religions. The episode, which centers on a woman in a cult named Melissa, not only explores the concept of past lives in a pretty revolutionary way — it aired in 1996, after all — but also offers tremendous insights into Mulder and Scully’s relationship.

In the episode, a hypnotist guides Mulder through a past-life regression, in which a person looks back into lives they have lived in others times and places. Meanwhile, Scully looks on skeptically but sympathetically. Mulder remembers a past life as a woman in WWII-era Poland, and life as a soldier in the Civil War. He reveals that Melissa, the woman from the cult, is his soulmate, appearing as his wife or husband in each incarnation — but more importantly, that he has been incarnated with Scully as well.

“Souls come back together,” Mulder explains, entranced. “Different, but always together. Again and again, to learn.” Mulder says that Scully was his father in Poland, and his sergeant in the Civil War. In both incarnations, Scully dies in front of Mulder, and he is devastated.

What is so important about this episode is that it establishes that Mulder and Scully are not soulmates. Scully always incarnates as Mulder’s closest friend, his fiercest protector, and his constant companion and champion. Their sexual relationship is secondary to their friendship, proving that their love is deeper than unconsummated lust.

Some have “resting bitch face,” but Scully has “resting skeptic face.” As Mulder runs across the country in search of vampires, Big Foot, and little green men, Scully patiently follows behind, tasked with disproving his supernatural theories. However, on rare occasions, Scully is forced to confront the unexplainable, and “Chinga” is one such occasion. Although she is meant to be on a quiet New England vacation, Scully gets tangled up in an investigation after finding a grocery store full of people attempting to claw their own eyes out. With Mulder back in DC, it is one of the few episodes where we see Scully flying solo (and how bored and useless Mulder is on his own).

With “Chinga” co-authored by none other than Stephen King himself, the episode’s monster-of-the-week — a murderous, talking doll — comes as no surprise. As the episode plays out, Scully is forced to accept the possibility of a paranormal force at work, while Mulder insists he think nothing supernatural is afoot. This switch is indicative of growth for both of the characters, with Scully growing less skeptical and Mulder more reliant on evidence than gut feelings. The moment when Scully finally throws the porcelain doll in a microwave and nukes it to death is a campy nod to Scully’s growing belief in the unbelievable.

Although not a great episode of “The X-Files” (it was unwittingly titled with a Spanish curse word), “Chinga” is worth watching for one scene alone. When Scully calls Mulder to consult on the case, he asks her if she thinks something supernatural is afoot. She rattles off a laundry list of paranormal indicators — “Like evidence of conjuring or the black arts? Or shamanism, divination, Wicca, or any kind of pagan or neo-pagan practice? Charms, cards, familiars, blood-stones, or hex signs, or any kind of the ritual tableau associated with the occult; Santeria, Voudoun, Macumba or any high or low magic” — Mulder interrupts her with an enthralled “Scully?  Marry me.”

When Mulder blurts his proposal, Scully simply retorts, “I was hoping for something a little more helpful.”

After six seasons of excruciating sexual teasing, the writers threw fans a huge bone with “Arcadia.” The episode is about Mulder and Scully going undercover as a married couple to investigate a series of disappearances in a too-perfect planned community. Much to Scully’s chagrin, years of quiet lust come pouring out of Mulder’s very happy mouth — most of his lines are marriage jokes and eager public displays of affection that betray a real desire to be with her. The second day of their undercover mission, a neighbor asks how their first night went. Mulder cheerfully replies, “It was wonderful. We just spooned up and fell asleep like little baby cats.

As always, Mulder takes on the more stereotypically feminine role of emotional, affectionate partner, while Scully scoffs. The episode even expertly mocks the machismo, misogynistic husband when Mulder jokingly demands Scully make him a sandwich and she responds by throwing her latex gloves at him wordlessly.

What this episode lacks in spooks and scares — a trash monster? Really? — it more than makes up in brilliant gender-role-subverting banter.

Mulder and Scully’s revolutionary relationship was born out of the subversion of audience expectations — both of how men and women act and relate to each other, and how we expect their interactions to play out on TV. We have them to thank for other role-reversed and fantastic sleuthing couples (think Booth and Brennan in “Bones” and Linden and Holder in “The Killing”) and for teaching television writers the magnificent power of the “will-they-or-won’t-they” seasons-long sexual tension.

Hopefully, Mulder and Scully’s relationship will continue to produce ground-breaking, stereotype-defying television in its 2016 revival — but maybe without past lives, killer dolls, and undercover suburbanites this time.

“The X-Files” airs Monday nights at 8/7 central on Fox. “Short Skirts and Subtext” is a monthly column that examines the intersections between feminism and quality T.V. 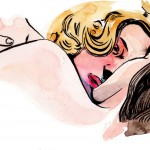