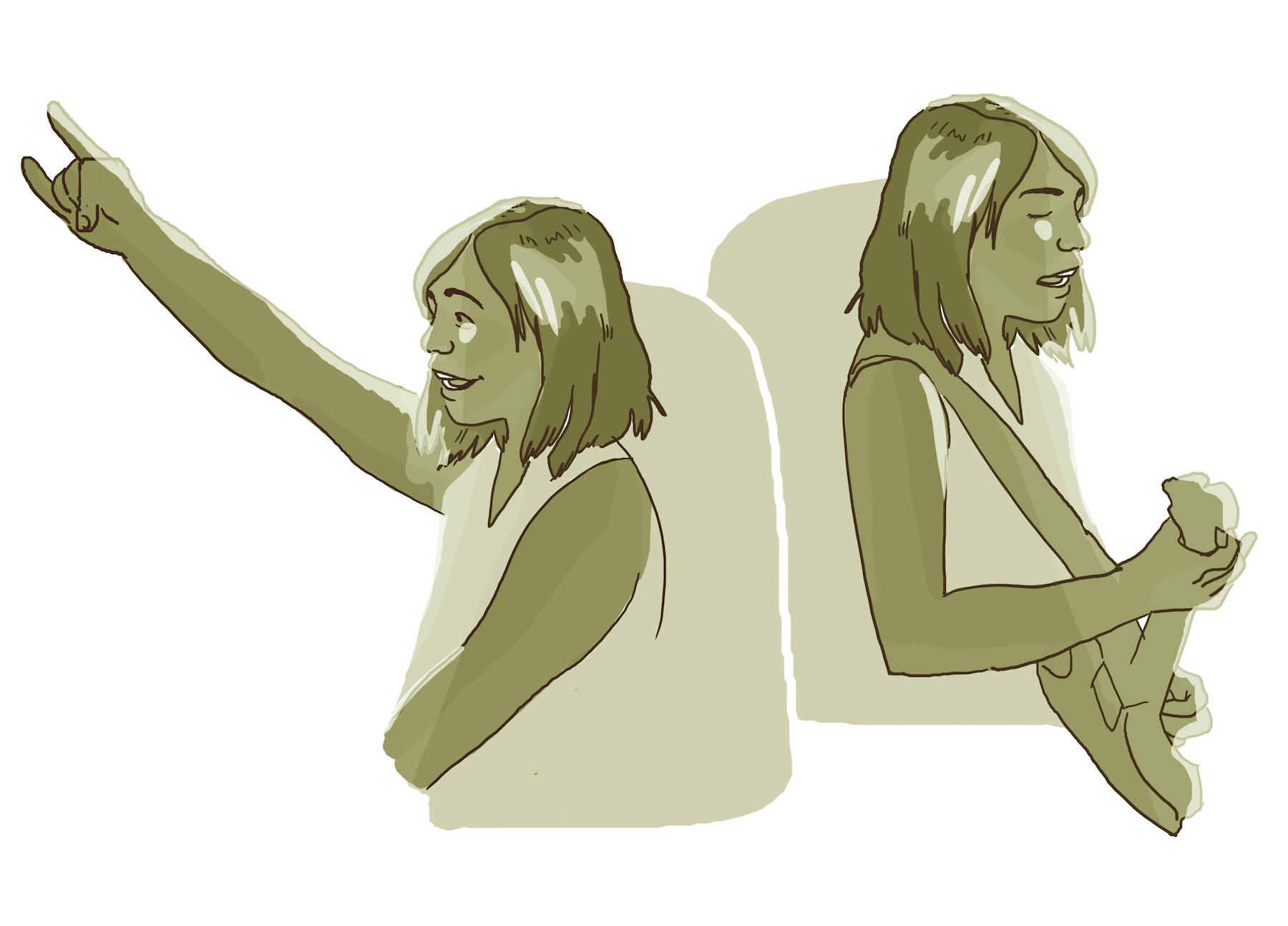 By 5 p.m. there was a one-block line around the corner from the Museum of Contemporary Art. A frazzled Carrie Brownstein hustled by in a manner she would later liken to a feral cat, unable to find the proper entrance. To see any other rock legend panic at the threat of tardiness might have been humanizing, but not with Brownstein. It only made her myth expand in the minds of her fans — this guitar-slaying hyper-intellectual feminist of monumental influence is also punctual! It was almost too much to bear.

Yes, we fangirls were out in full force on Friday, October 30 to hear Brownstein in conversation with Pitchfork’s Jessica Hopper as part of the MCA’s collaborative In Sight Out series.

For those who don’t know (that is fangirl speak for “duh”), Brownstein released a memoir, “Hunger Makes Me a Modern Girl,” detailing her own transformation from Olympia fangirl into willing participant as founding member and guitarist for riot grrrl harbingers Sleater-Kinney.

“I will read from my book for one and a half minutes because that’s the only appropriate time to read aloud to anyone from anything,” Brownstein said to laughter before doing precisely that.

What followed was an hour and a half of deeply engaging discourse about her motives for and approach to writing, and her unexpected reasons for doing so. Those reasons were, as explained just minutes into the conversation, to move from someone who long felt disembodied into a state of embodiment, and to be “a willful protagonist” in her own narrative.

Brownstein said the book was originally pitched as a collection of cultural criticism akin to her longstanding NPR Music blog Monitor Mix. “But what I found in terms of the discourse I was having with the readers was that people appreciated when I sort of inserted myself into the story,” she said. “That’s what they wanted to hear.”

Another small push in the direction of memoir was something essayist Charles D’Ambrosio said in an interview in the New Yorker about writing “making the distance go away.” Brownstein said she realized that to close the liminal distance between her present self and her Sleater-Kinney self would be a great step forward on the path to becoming embodied. “The story of how and why I started playing music — it involved a very deliberate trajectory,” she said. “I really set out to get to Olympia. I wanted to tell that story.”

It should be mentioned that at the inception of the book, there were not yet whiffs of a Sleater-Kinney reunion; it was just a fortuitous progression in that it “gave me an epilogue,” she laughed.

There was also the matter of addressing that initial trepidation about inserting herself into the narrative in a way that was neither overly vulnerable nor not vulnerable enough, in a format that resisted both salacious gossip and monotonous tour diary, that never teetered too far toward superficial levity nor dark reality. Quite a task.

Brownstein broached that concern in two ways. The first was to realize that the “self” represented in her book was not a singular voice. “In each situation that we have, we’re different people,” she said. “You might be a daughter, you might be a musician, you might be a bandmate, a friend—and so each part is written from that perspective. Then you don’t feel stuck in thinking, Is this the definitive version of this? No, I can go back and rewrite it from a different facet. It was an empowering process.”

The second task—adopting an openness to contradiction, as many inevitably arise when one is writing from multiple points of view, or, in this case, multiple selves. “People are scared of their own authorship,” Brownstein said. “I had to be ok with contradiction.” Hopper loosely connected this idea back to an early mission of riot grrrls—to embrace the perceived contradiction of, say, a feminist who wears lipstick. Brownstein agreed that interesting duality is often born through the synthesis of seemingly oppositional ideas.

She explained how her pal Questlove, in his book, simultaneously proved and subverted his reliability as a narrator by including The Roots’ manager Rich’s side of the stories in the margins. “So Questlove recounts something, and then his manager disputes it at the bottom,” she laughs.

While Brownstein didn’t publish anyone else’s versions of events, she did excavate and consult documentation, primarily in the form of letters written and received during Sleater-Kinney’s time on the road. “[Artist] Miranda July and I had an epistolary relationship for years in relation to a real life friendship,” she said, “and we have often documented instances in our lives through the writing of letters to one another.” Brownstein said even these relics were not regarded as absolute truth, but rather “helped to color some of the memories that had faded.”

Perhaps the most charming example of Brownstein’s keen self-awareness came out of the descriptions of these letters, and her surprise at the high level of diction used therein. “I was really loquacious, and I was like, ‘Ah, I am still like that!’ I still can be garrulous and circumlocutionary in the way I speak. It was a little silly to hear that voice coming out of someone who was younger than I am now,” she said.

The audience roared with laughter, not because any of us knew what any of those words mean, but because that sentiment, somehow presented without a speck of irony or pretension, and Brownstein’s knowing full well that it is still a relatively silly way of speaking demonstrated the exact “embodiment” she has been working toward. She adds, “Who do I think I am, Virginia Woolf?”

Brownstein is a natural performer. In a lot of ways she is reminiscent of Steve Martin, and cites him as an idol (though she said that comparison begins and ends with her dance moves). She first used performance as a way to enter social spaces at a very young age. “It was kind of ridiculous how, in almost any social situation I would just insert myself into it via performance—very clumsily, often without any training,” she said. But that initial clumsiness may have been responsible for Brownstein’s signature performance style, which can be reduced to a single word—genuine.

Her performative instincts also seem driven by her long history of music fandom—and really, who is more genuine than a fangirl? Her best bits on the show “Portlandia” would not land as perfectly as they do if she weren’t so acutely aware of and delighted by the scenes she’s skewering, and her guitar and singing styles would not be nearly as emotive if it she hadn’t spent years as a devout audience member herself. “[Fandom] isn’t a passive experience; it isn’t a temporary state,” she said. “It has transformative power, and there was never anything cute or paltry about it.

“Being a fan allowed me to be seen at a time I felt very small,” she adds. “I did not feel seen by the family I was growing up in and fandom allowed me to posit myself in a situation where I felt seen because of the love that I was projecting out. It’s so much more about having a conduit through which to love than to actually be loved.”

Coming from someone who openly wept through Sleater-Kinney’s entire set at Pitchfork fest earlier this year without quite understanding why, that is the most perfect way to describe watching Brownstein play. You are in love.

When she brings that level of care and authenticity into craft—or in her case, crafts—it’s not hard to see how she came to feel “disembodied” after years of giving her whole self over to fans across multiple disciplines. Now she’s added yet another channel, situating herself as just as viable a force in the literary world as any of the others she artfully inhabits.

Brownstein, after an hour and a half of delight and insight, left us, another room full of loving fans, with a beautiful sentiment on where we figure into her path to embodiment: “I just desire for no one to feel partial or small. Work to stop effacing who you are, or surround yourself with people who don’t let you. That’s what I did.”

Hunger Makes Me a Modern Girl is available now through Riverhead Books. 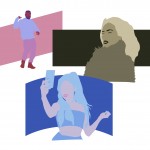 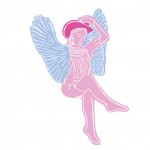