Patti Smith released a new memoir, and made life-affirming eye contact with the Entertainment Editor.

Encountering the music of Patti Smith for the first time is a transformative experience. If you don’t believe me, just ask one of the 1,100 people who gathered at the Lund Auditorium on October 11 to hear her speak about her new memoir, “The M Train.”

The event was organized by the Oak Park-based independent bookstore, the Book Table. The atmosphere of the packed auditorium was one of reverence and excitement. The woman sitting next to me excitedly told me about the first time she listened to “Horses” back in 1978 when she was a senior in high school. Rachel Weaver, the co-owner of the Book Table, recalled her first encounter with Smith’s music when she was a teenager saying, “It was both a celebration for all that was good, and a salve for all that was bad.”

For me, seeing Patti Smith in the flesh was like seeing all my hopes and dreams manifest into a sentient being. She was dressed in loose-fitting jeans, black work boots, a T-shirt, and a black men’s sport coat. Her long silver hair just barely brushed her shoulders, making her look like a wise witch.

She was greeted with an immediate standing ovation as she walked up to the mic. “I didn’t really plan anything,” she admitted. “I’ll show my genius for incomprehensible answers, and if you don’t like it that’s too bad.” Patti Smith is unapologetic; what else would you expect from the godmother of punk? Her sense of humor is wry and slightly self deprecating.

“It’s just me, that’s all you get and poor you,” she said before she began to read.

Smith reads like a natural poet, seemingly unaware of the mythos she inspires. Her voice is a little deadpan and on occasion remnants of her New Jersey accent surface, causing her to pronounce “pillows” like “pillas.”

Throughout the reading she chattered happily about her new book. Unlike “Just Kids,”  “M Train” is not structured around a linear narrative. Instead, it’s a series of narrative essays, an intimate peek into Smith’s stream-of-consciousness which happens to contain “little commercial breaks of philosophical musings,” as well as plenty of love for her favorite New York City cafe, Cafe Ino. Smith also managed to slip in a couple of chapters about her cats, which she describes as “sort of like the whaling chapter of ‘Moby Dick,’ just technical stuff.”

Patti Smith is unbelievably human. She spills coffee on herself and talks with the gaggle of drunk kids stumbling past her stoop on New Year’s Eve. She’s also capable of seemingly boundless amounts of love. When she spoke of her “most wonderful late husband,” MC5 guitarist Fred Sonic Smith, her eyes lit up and she smiled serenely.

Soon, the inevitable “question and answer” period that accompanies these talks arrived, and I wondered:

Should I ask a question?

After all, Patti Smith was the reason I definitively decided to go to art school in the first place. She gave me the courage to pack up and leave everyone I knew in favor of living a life devoted to art and music. I started carrying her books with me whenever I had to go somewhere that made me nervous. Thus, the first night I went to a punk show and got subsequently slammed into a wall, I also had a copy of “Early Work” stashed in my bag. I wanted to tell her these things, and most of all to say thank you.

So, I raised my hand.

“My name’s Rosie and I’m a writer and I just wanted to say thank you, like I uprooted my life for you.”

“You uprooted your life for me?”

She smiled and threw her arms out like happily like an imitation of Christ, radiating some punk rock guiding light.

“I’m like Tinkerbell, I’ll just pop up in your window every once in a while.”

At this point, I was in what Arthur Rimbaud would refer to as “an exalted state.” I told her about how my art practice feels like it’s eating me alive and she looked at me with seemingly infinite amounts of understanding and care.

“It doesn’t always have to go anywhere. I wrote from ‘76 to ‘91 and I didn’t publish anything. If you write to reveal something, which I hope you do, you’re going to suffer. That’s why when I was growing up so many people didn’t want their kids to be writers or artists. But listen, William Blake died poverty-stricken. Vincent Van Gogh died poverty stricken, you’d be in really good company.”

Other audience members asked her about her practice as a photographer. She said, “It was a revelation almost, to take a picture and see it and think, ‘I did something today.’” Her hope for her work is that “if someone buys one of my photos, they’ll put it above their desk.”

Just as the Q and A was about to end, an audience member called out, “Patti! I have some old clothes of yours from 40 years ago.” Smith looked intrigued and the audience member bought a clear plastic bag full of ratty clothes up to the stage. Smith knelt down and grabbed the bag, gingerly grabbing an old T-shirt, a blouse, and a red bandana.

“This was stolen. I never thought I would see any of these things.” She went on to explain that her touring van with three of her suitcases and Lenny Kaye’s stratacaster was stolen during a gig in New York City in 1976.

She grabbed the T-shirt, “This was the shirt I was wearing when I met Bob Dylan.

“Where did you find these?”

“In the back of a U-Haul,” the audience member quipped.

Smith grabbed the red bandana and held it close; she explained that her late brother and road manager, Todd Smith, gave it to her. “He wore this when he saw Jimi Hendrix.”

Later that night, Smith’s son Jackson joined her onstage and  accompanied her on the guitar as she sang her seminal hit, “Because the Night.” While she was singing she grabbed her brother’s bandana and tucked it into the pocket of her blazer for safe keeping.

Watching Patti Smith perform is magical. Sometimes she closes her eyes while she sings, like she’s communing with some sort of liminal realm that only she can access. Her voice is full and vibrant, and her presence is magnetic. It’s the sort of performance that evades written language, and the more you try to write about it, the more trite it sounds; it’s just that good.

Patti Smith has kind eyes. When she looks at you, it’s like you momentarily know all the answers to your most burning questions. Her gaze is life affirming; it’s like that line in the song “Tangerine” by Led Zeppelin, a “livin’ reflection of a dream.” The five minutes that I spent spilling my guts to Patti Smith were surreal and profoundly beautiful. It was like I was being blessed by the patron saint of punk rock in one magnificent moment of human connection. As if the universe aligned causing all the house shows, records, and ‘zines with jagged edges to culminate and confirm my sneaking suspicion, that Patti Smith really is looking out for me. 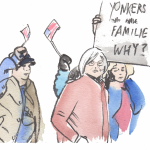 There Will Be No Heroes 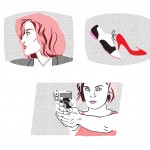