As a newcomer to Chicago’s queer scene by way of Iowa City, Iowa, I’ve been diving in and out of the activist vortex. I attended Dyke March back in June, marched against rape culture with Feminist Uprising to Resist Inequality and Exploitation (FURIE)  on July 19th, and am getting to know the outlets for my righteous rage as I get lost on the CTA and avoid Wrigleyville.

But, lez be real, sometimes I just need a drink and a cackle.

And, sometimes, I need a potluck.

There’s something sweet and healing about the idea of folks gathering with the intention to feed each other, and the food that shows up usually tells a story: “My grandfather taught me how to make this sauce. Don’t ask me what’s in it. You don’t wanna know.” “I had to learn to make a vegan version when I got older, but Mom still makes it with butter whenever I come home.” “Rent’s due tomorrow. Here are some chips. Don’t hate me.”

The potluck is the most human of dining experiences.

In the same vein of collective nourishment, last Monday’s LezFest II was a meetings of words, performance art, and music. A proactive response to the lack of women in Chicago’s LGBTQ theatre scene, LezFest was born in 2014 to Pride Films and Plays (PFP) as “a celebration of women who love other women,” and found a home at Mary’s Attic in Andersonville.

Mary’s Attic, the second level of Hamburger Mary’s, served as a warm, shadowy counterpart to the rollicking and bright restaurant below. Swathed in deep violet lighting, the stage sat up front while the crowded bar buzzed towards the back. It was this dark background that provided an ideal space for a rainbow of performances, all organized to raise funds for PFP’s LezPlay Weekend, which will run September 11-13. 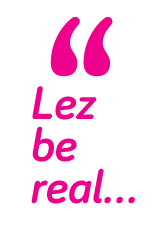 The lineup performed for a sold-out audience and featured talents from across the lesbian identity spectrum. Lauren Sivak, Managing Director for Walkabout Theatre, opened the show with a tender spoken word piece, aptly named “Beginnings.” Weaving together the headiness of new love with the reclusivity of a secret relationship, Sivak took the audience along with her.

The most powerful element of Sivak’s story was her ability to withhold. Sivak used humor economically throughout the piece, bringing her audience back from the edge of teenage melodrama at just the right moment. I felt like I do when I watch a favorite movie: “God, if they just did this one thing differently, the whole plot would change. They have no idea what they’re doing!” I wait for the character to make a different choice, but they never do. That doesn’t mean I stop watching, though. Sivak bottled that dynamic in her work.

The evening also served some important political work by establishing a safe space. The importance of events like LezFest lies in how it brings people together and what that togetherness provides. For many queer women, including myself, this kind of community can be comforting and validating, asserting that there is an audience for these stories.

For the most part, this resulted in some wonderfully diverse observations, but it also treaded lightly into moments of regression. One of the performers sang a campfire song from the Michigan Womyn’s Music Festival’s heyday. It was an odd moment that elicited cheers from some members of the audience, while the women the performer called “baby dykes” all tensed up at this tribute to a Trans-Exclusionary Radical Feminist (TERF) festival.

As my friend put it, “I feel like my grandma is telling a racist story at the Thanksgiving table.” The radical lesbianism of the 1970’s typically focused on the experiences of those “born women,” which then created a political ideology that excluded trans women from the conversation. This performer didn’t seem to recognize these issues in her piece and, in turn, created a divisive energy that left half the room in silence and the other half singing along. By provoking these moments of unease, LezFest was able to both perform and critique a moment in queer history.

So, how exactly does one bring this all back together and close the show?

Julie Nightinjail, a queer country musician, invited everyone to sing along to the chorus of her final number, “Everybody Loves a Crafty Beaver,” which takes Menard’s pervasive hardware jingle and tips it on its head. Instead of “Save big money at Menards,” Nightinjail requested that her audience sing, “I found my great, big honey at Menards!” That’s right. She’d written an entire song about lesbian dating around a Menards ad.

And, like the rest of the night, the closing piece dug up the weirdness of Middle America and pointed out its queerest corners. The packed house of lesbians and allies spoke volumes to one of my favorite group chants: “We’re here! We’re queer! We’re fabulous! Don’t fuck with us!” It’s high time to get the theatre community chanting along. 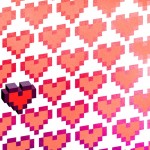